The world’s first battery-electric freight train was unveiled at an event in Pittsburgh on Friday, amid a fresh attempt by some US lawmakers to slash carbon emissions from rail transport in order to address the climate crisis.

Wabtec, the Pittsburgh-based rail freight company, showed off its locomotive at Carnegie Mellon University as part of a new venture between the two organizations to develop zero emissions technology to help move the 1.7bn tons of goods that are shipped on American railroads each year.

Perched upon a strip of rail at Carnegie Mellon’s technology campus on the banks of the Monongahela River, the cherry red, 75ft-long train provided a striking background to politicians, rail executives and academics who urged a swifter industry transition away from fossil fuels. Dignitaries were allowed to clamber up a vertiginous ladder on to the train to inspect its confines, which included a small driver’s cabin in front of 500 lithium-ion battery modules, arrayed in stacks in the heart of the vehicle.

The new train, known as the FLXdrive battery-electric locomotive, underwent successful trials in California earlier this year where it was found to have cut fuel consumption by 11%, which meant reducing the amount of diesel used by 6,200 gallons. Wabtec said that the next iteration of the locomotive, to be rolled out within two years, will be able to cut the consumption of diesel, the fossil fuel traditionally used in freight rail, by nearly a third.

The company also said emissions will be entirely eliminated through the development of accompanying hydrogen fuel cells. If the technology is used worldwide, Wabtec estimates planet-heating emissions could be cut by 300m tons a year, with nearly half of those saved emissions occurring in the US.

“A bolder, cleaner, more efficient transportation system is in our grasp,” said Raphael Santana, chief executive of Wabtec. “This is just the beginning.”

The rail industry is seeking to position itself as an enthusiastic backer of Joe Biden’s climate agenda despite its history of funding groups that reject the reality of climate change and fiercely protecting the stream of coal transported on US rail.

The use of rail to move freight long distances has been an integral part of the American economy since the Union Pacific and Central Pacific railroads were joined up in 1869, allowing goods to flow freely to the US west for the first time. The rail freight industry is now worth around $80bn and spans 140,000 miles of track across the US.

However, the environmental benefits of rail have been undermined by the heavy reliance upon diesel to fuel freight trains, as well as a widespread preference among businesses to move goods via trucks rather than trains. This is a problem globally beyond the US – the International Energy Agency has said that freight rail is “often neglected” in climate debates and currently carries only 7% of all freight moved around the world.

Wabtec is betting the FLXdrive will change this dynamic. Housed in a traditional locomotive body, the new battery system drives the axles of the train and uses the kinetic energy of the train’s braking to recharge, meaning the batteries should never run out. The newest version will be a 7-megawatt battery locomotive, which is “100 times the power and energy within a Tesla – it’s dramatically more powerful”, said Eric Gebhardt, Wabtec’s chief technology officer.

The unveiling of the locomotive was used by two attending Democrats to renew their calls for $600m in the planned Congressional reconciliation bill to be dedicated to a new freight rail innovation institute that would provide the research and development to cut emissions from the sector. The lawmakers, and Wabtec, consider battery-powered trains more practical and cheaper than electrifying all of America’s rail network.

“We are trying really hard to get it into the bigger bill,” Senator Bob Casey told the Guardian. Casey, a Pennsylvania Democrat, has introduced to the Senate a $600m proposal for the institute, with an identical bill in the House of Representatives written by Conor Lamb, another Democrat whose district includes part of Pittsburgh. “We are in a race against irreversible climate change and rail is part of the strategy to cut emissions,” Casey said. 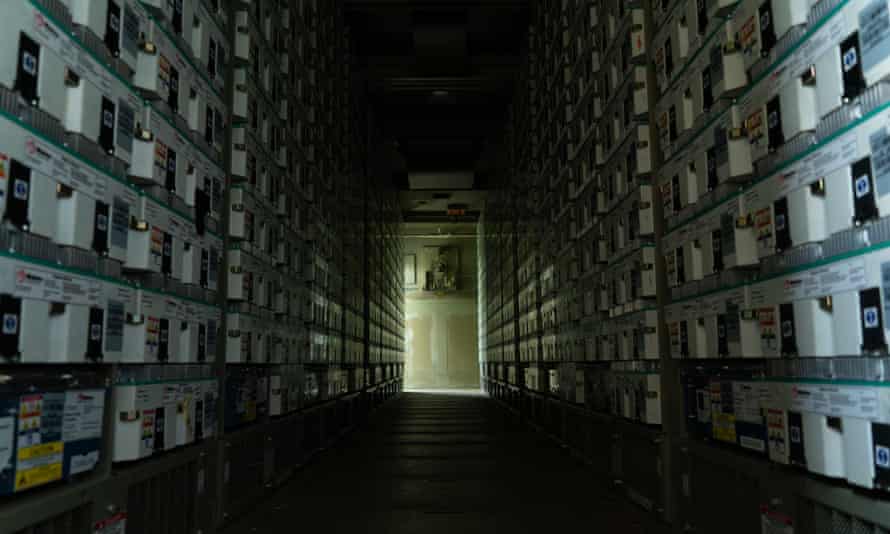 The battery cell room on the train. Photograph: Courtesy of Carnegie Mellon

According to Casey, recent climate disasters, such as the flooding in Tennessee and New York City and wildfires in the US west, have focused the minds of some fellow senators. “Senators are human beings, too,” he said. “Republicans don’t have the same sense of urgency we do but many of them recognize the party can’t just deny this stuff anymore.”

A greater tonnage of goods is now moved by trucks on roads than by rail, however, and the rail industry hopes action on the climate crisis will prove advantageous to its own prospects. “If we decarbonize all of the locomotives and decrease the number of trucks, we will get to where we need to be,” said Gebhardt. Medium and heavy duty trucks are responsible for about a quarter of all US emissions from transportation, according to the Environmental Protection Agency, more than double the pollution emitted by aircraft.

Gebhardt said that Wabtec hopes to develop fuel cells with so-called “green” hydrogen, which is produced via renewable energy, but that “blue” hydrogen was a possibility, despite researchers warning that this form of energy can in some cases be even more polluting than traditional fossil fuels.

Bill Sanders, dean of the college of engineering at Carnegie Mellon, said that he hoped the proposed institute will provide research on fuel cells, battery systems and railroad efficiencies.

“This is a very exciting moment – battery technology is developing extremely quickly now,” he said. “People talk about autonomous cars but I think progress on rail is significantly closer than that. We see interest from the federal government in supporting this and I think that would be very helpful.”