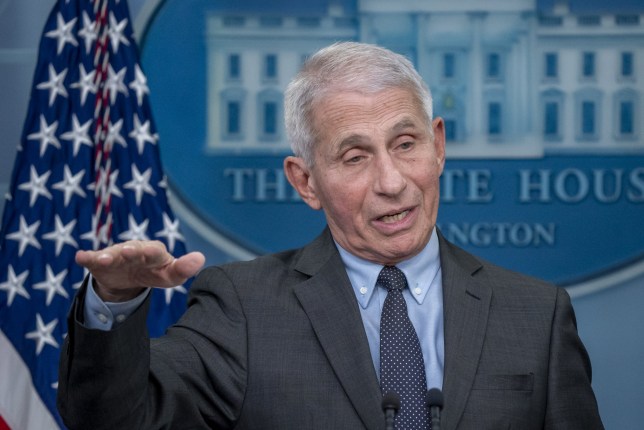 Dr Anthony Fauci spoke at his last White House briefing before stepping down as director of the National Institute of Allergy and Infectious Diseases (Picture: Shutterstock)

Dr Anthony Fauci’s final briefing as the nation’s top infectious disease expert took a chaotic turn when he was hit with questions on the origins of the coronavirus.

Fauci, 81, who is leaving his post as director of the National Institute of Allergy and Infectious Diseases (NIAID) next month, delivered his last message after 54 years of public service.

‘My message – and my final message, maybe the final message I give you from this podium – is that please for your own safety, for that of your family, get your updated Covid-19 shot as soon as you’re eligible to protect yourself, your family and your community,’ Fauci said from the White House briefing room on Tuesday.

Fauci also advised Americans to get tested before getting together with family members for the Thanksgiving holiday. 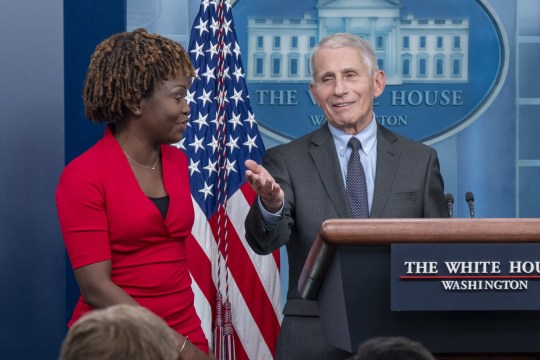 ‘When we’re gathering at a family gathering for Thanksgiving or for Christmas, or for any other holiday as we get into the winter, it makes sense that you might want to get a test that day before you come into a place in which you might be infected and spread it or other people,’ he said.

After his message, Fauci was bombarded with politically-charged questions from reporters on the coronavirus.

Daily Caller reporter Diana Glebova tried to ask Fauci what he has done to probe the origins of the virus, but was cut off by White House Press Secretary Karine Jean-Pierre.

I attempted to ask Fauci several times on what he personally did to demand answers into the origins of COVID-19.

I always come with honest answers that Americans want to know.

That’s why the White House refuses to call on me, and then calls ME “disrespectful.” https://t.co/B3zWrYaEEF

‘I will not call on you if you yell, and also you’re taking time off the clock because Dr Fauci has to leave in a couple of minutes.’

Glebova spoke up again, but Jean-Pierre said she was ‘done’ and would not get into ‘a back-and-forth’ with her.

‘You need to call people across the room,’ said Ateba. ‘She has a valid question, she’s asked about the origin of Covid.’

Jean-Pierre told Ateba, ‘It is not your turn’.

‘I hear your question, but we’re not doing this the way you want it. This is disrespectful,’ Jean Pierre said. ‘Simon, I’m done. Simon, I’m done. I’m done with you right now. You’re taking time away from your colleagues.’

It marked the end of Fauci’s long tenure, which was marred with controversy during the coronavirus pandemic. Fauci had a constant presence at briefings throughout the pandemic and often butted heads with ex-President Donald Trump on the country’s response strategy.

Fauci announced in August that he would leave his role as NIAID director and White House chief medical advisor in December. 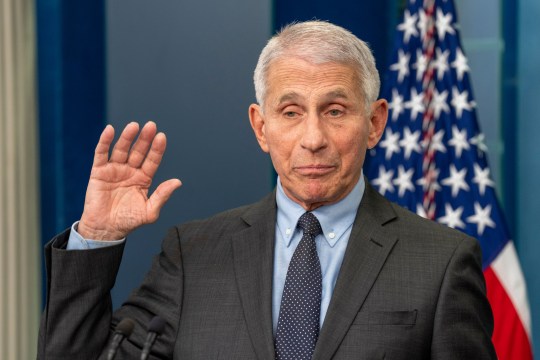 Dr Anthony Fauci will step down from his role in December after more than five decades of public service (Picture: Shutterstock)

Fauci on Tuesday said he ‘gave it all I got for decades’.

‘I think what I’ve accomplished in my 54 years at the NIH (National Institutes of Health) and my 38 years as the director of NIAID, although Covid is really really very important, it is a fragment of the total 40 years that I’ve been doing it,’ Fauci said.

‘I’ll let other people judge the value or not of my accomplishments, but what I would like people to remember about what I’ve done is that every day for all of those years I’ve given it everything that I have and I’ve never left anything on the field.’