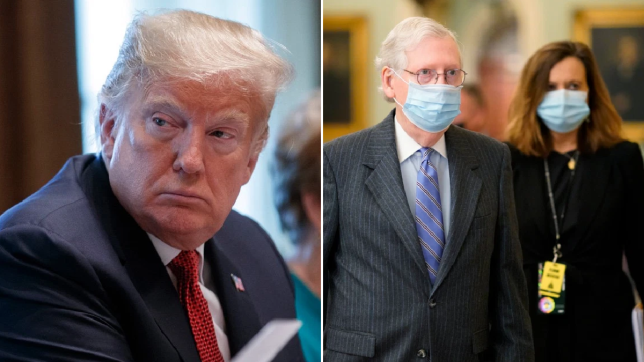 Donald Trump’s second impeachment trial has kicked off, amid growing consensus that the former president will be cleared of wrongdoing. Proceedings began at 1pm EST on Wednesday with a four hour debate about whether it is legal to even try Trump.

US Senate Majority Leader Chuck Schumer opened the trial by saying the allegation against Trump is ‘the gravest charge ever brought against a president in the history of the United States.’ Impeachment manager Jamie Raskin, a Democrat representative who is acting as lead prosecutor, then told senators his sides would present ‘cold, hard facts’ which he says prove Trump’s guilt.

He played a video of Trump speaking to supporters shortly before the January 6 riots, with the clip then cutting to footage of the Capitol being overrun.

The upper chamber of the US Congress, the Senate, has already green-lighted the trial with a vote, with prosecution and defense arguments set to begin Wednesday. Democrat impeachment managers, who are leading the case against Trump, said on Tuesday that they planned to reveal new information on him.

Meanwhile, Trump’s team of three lawyers are expected to play tapes of Democrat politicians calling for action against the former president and his supporters. They say Trump’s speech to supporters on January 6, hours before the US Capitol riots was no worse than what was previously said by Democrat rivals.

The trial will offer each side 16 hours to put forward their arguments. It is expected to conclude early next week, and will probably be the shortest impeachment trial in US history.

Trump’s legal team say his words to supporters were perfectly acceptable because of his First Amendment right to free speech. Democrat impeachment managers say Trump knowingly riled up supporters who subsequently rampaged through the Capitol, with four protesters and a police officer killed in the ensuing chaos.

Trump has been formally charged with incitement of insurrection after telling his supporters to take action shortly before the Capitol riots. So far, just five members of his Republican party have indicated that they may vote to convict him.

A total of 17 Republican senators must vote to convict Trump to give the Democrats, who have 50 votes in the Senate, the 67 vote majority they need to find him guilty. Political analysts think it is unlikely that they will hit that number, and are convinced that Trump will be cleared of wrongdoing for a second time.

Politico reported on Tuesday that Trump is relaxed about the trial, and is convinced he will be cleared. He has kept a low profile since moving to Florida last month, and will watch proceedings on television this week, according to aides.

If he does escape conviction, he would be free to run for president again in 2024.

Royal Family tree – Where does Princess Eugenie’s royal baby sit in the line of succession? – The Sun

Police robot ‘Digidog’ labelled racist because of where it patrols