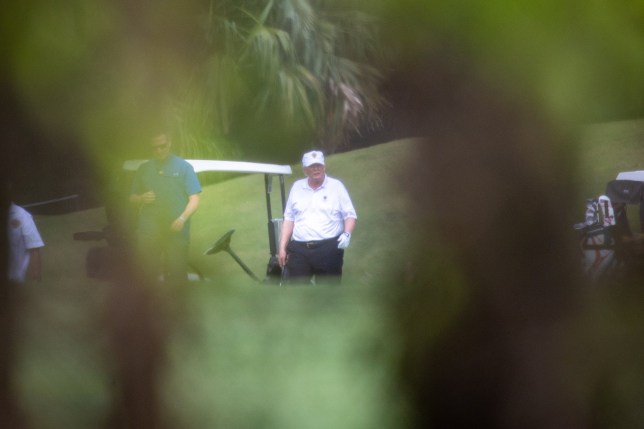 Donald Trump spent Valentine’s Day golfing as he was cleared to run for office again (Picture: Zak Bennett for DailyMail.com)

Donald Trump spent part of Valentine’s Day alone on one of his golf courses…hours after he was cleared to run for office again. The former President of the United States was snapped enjoying his favorite past time at the Trump International Golf Club in West Palm Beach, Florida, on Sunday.

Trump wore a white polo shirt and white baseball cap, which did not appear to be emblazoned with his trademark ‘Make America Great Again’ slogan. The president appeared relaxed, and was snapped by MailOnline just hours after being cleared of inciting the deadly January 6 US Capitol riots at his second impeachment trial.

Saturday’s verdict saw 57 senators vote to convict Trump, far short of the 67 needed for him to be found guilty. The acquittal means Trump can make good on the rumor that he plans to run for president again in 2024.

A statement shared by Trump’s office shortly after Saturday’s verdict branded the trial a ‘witch hunt.’ And it added: ‘Our historic, patriotic and beautiful movement to Make America Great Again has only just begun. 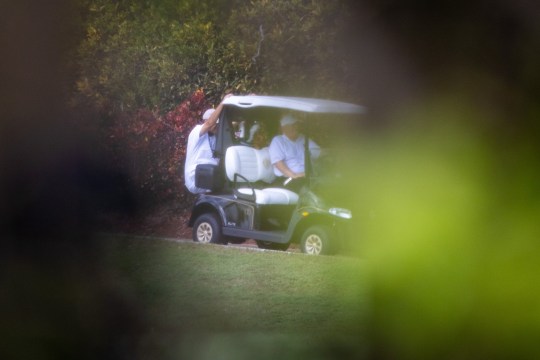 The former president was seen behind the wheel of a golf cart as his own club in West Palm Beach, Florida, on Sunday (Picture: Zak Bennett for DailyMail.com)

‘In the months ahead I have much to share with you, and I look forward to continuing our incredible journey together to achieve American greatness for all of our people. There has never been anything like it!’

Many of the Republican senators who voted to clear Trump are believed to have done so over fears of a backlash from their voters – most of them staunch Trump fans – in the 2022 mid-term elections.

But former Trump ally Mitch McConnell – who himself voted to acquit – lashed out at Trump after, suggesting senior Republicans could frustrate Trump’s efforts to return to frontline politics.

He also faces two criminal investigations. Manhattan prosecutors are probing Trump’s finances, while investigators in Georgia are considering whether to bring charges over a call the former president made last month. 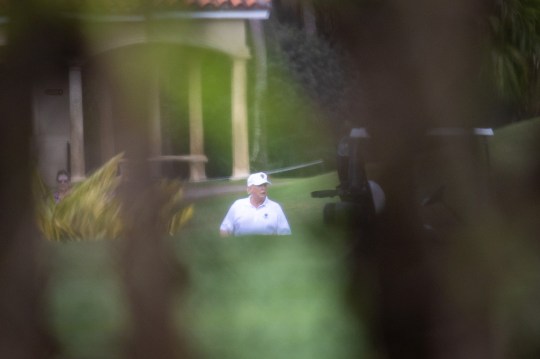 Trump released a statement hailing his acquittal – but has yet to say for sure whether he plans to run for office again (Picture: Zak Bennett for DailyMail.com)

Trump rang Georgia Secretary of State Brad Raffensperger asking him to try and find more votes to help him beat Joe Biden in the traditionally-conservative state.

Raffensperger refused to do so, and later released the call.

It came shortly after a CNN report accused her of being chilly with her husband, and of spending her days enjoying multiple spa treatments.