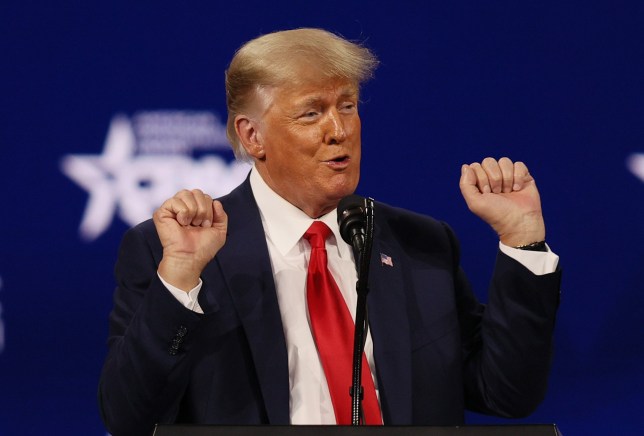 Donald Trump, pictured in Orlando last month, upstaged a wedding by turning a speech into a rant about China, Iran, the US southern border and his election loss (Picture: AP)

Donald Trump hijacked a newly married couple’s wedding by turning a celebratory speech into a rant about China, Iran and the US southern border.

The former President of the United States let rip after being asked to speak at the nuptials being held at his Mar-a-Lago club in West Palm Beach, Florida, at the weekend.

‘We were ready to make a deal, they were ready to do anything, they would have done anything. And this guy (President Biden) goes and drops the sanctions and then he says we’d like to negotiate now. 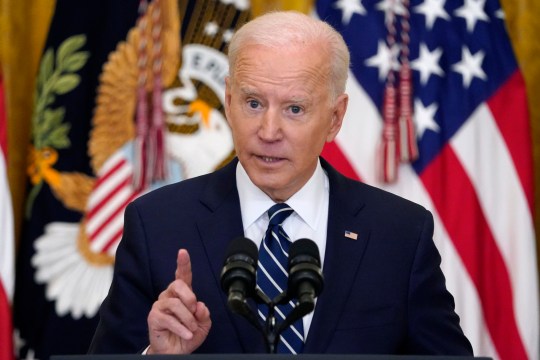 The ex-president took aim at successor Joe Biden’s policies on China and Iran, as well as conditions at the US southern border, which has seen a surge in the numbers of migrants trying to cross illegally (Picture: AP)

‘We’re not dealing with the United States now. They don’t want to deal with that stuff. And now China the same thing. They never treated us that way. What happened a few days ago was terrible.’

Trump was referring to his trade war with China, and economic sanctions against Iran, with Biden vowing to take a more diplomatic approach to international relations.

The ex-president then turned his attention to the US southern border, which has seen a surge in migrants arrive in the coming weeks, and growing numbers of unaccompanied children now living in cramped camps.

Trump said: ‘The border is not good. It’s the worst that it has ever been…what’s happening to the kids, they’re living in squalor. They are living like nobody has ever seen. There’s never been anything like this…

‘These things are showing thousands and thousands of people coming up from South America.

‘It’s a disaster. It’s a humanitarian disaster from their standpoint and it’s going to destroy the country. And frankly, the country can’t afford it.’

Trump continued to share his thoughts on politics, turning his attention to the November presidential election which he lost.

Winning himself a cheer after asking ‘Do you miss me yet?’ Trump continued: ‘They said get 66 million votes, sir, and the election is over. I got 75 million votes, and you saw what happened.

‘At 10.30pm in the evening, all of a sudden, they said that’s a strange thing, why are they closing up certain places. There’s a lot of things happening right now.’

The president then acknowledged the newlyweds themselves, telling them: ‘It’s an honor to be here…You are a great and beautiful couple.’

Trump has kept a relatively low profile since being banned from Twitter and leaving the White House in January.

He has given occasional phone interviews to favored broadcasters Fox News and Newsmax, and continues to tease the prospect of a 2024 White House run.

Trump remains hugely popular among Republican voters, although some conservative sources predict he will avoid a second presidential bid, and instead enjoy wielding his power over who succeeds him.