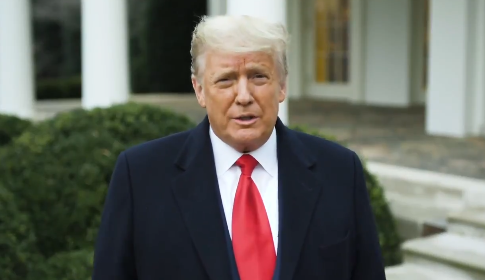 Donald Trump sent a self-pitying video message urging ‘very special’ protesters who besieged the US Capitol to ‘go home’ and adding: ‘We love you.’

Speaking as the seat of the US government was overrun and trashed by his supporters on Wednesday, President Trump said: I know your pain, I know you’re hurt, we had an election that was stolen from us, it was a landslide election and everyone knows it. But you have to go home now, we have to have peace.’

We have to have law and order. We have to respect our great people in law and order. We don’t want anybody hurt. It’s a very tough period of time. there’s never been a time likle this where such a thing happened where they could take it away from all of us…

‘This was a fraudulent election, but we can’t play into the hands of these people. We have to have peace, so go home, we love you, you’re very special.’

Twitter immediately censored Trump’s tweet for potentially provoking violence. Earlier on Wednesday, the president himself appeared at a ‘Save America’ rally, many of whose attendees later chose to storm the Capitol.

Trump himself said he would join them – but later returned to the White house, and has since called out the National Guard to restore order. Wednesday’s chaos saw a woman shot in the neck by a cop, and at least one improvised explosive device (IED) discovered in its grounds.

The Senate has since been cleared of protesters, who police are now kettling out of the building. Lawmakers are said to be determined to continue with the certification hearing that triggered Wednesday’s riots.

That should see Congress officially certify Joe Biden’s win, ahead of his inauguration on January 20.

Kanye West Gets ‘Jealous’ of Kids in Kim Kardashian Marriage

Mom told husband she’d kill 5 kids if he didn’t come home, then did it