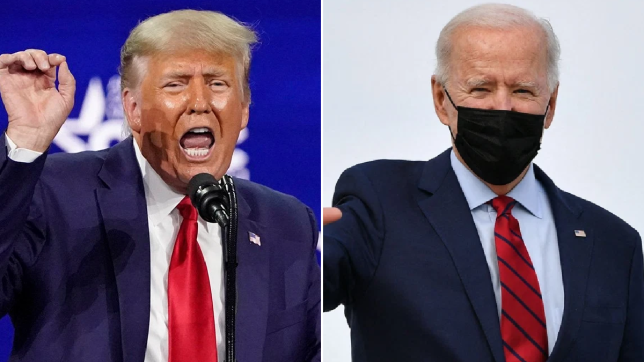 Donald Trump has issued a statement seeking credit for the US vaccination program’s success after Joe Biden announced a huge surge in available doses (Pictures: AP)

Trump spoke out after President Biden held a press conference Wednesday afternoon which saw him announce the US had ordered an additional 100 million doses. They will be made by Johnson & Johnson – whose vaccine only requires a single injection – in partnership with rival pharmaceutical giant Merck.

The ex-president was condemned for playing down Covid as the virus hit US shores last spring, and later admitted doing so to try and avoid panicking people. He went on to spark fury showing lukewarm support for mask-wearing, and asking whether an injection of disinfectant could cure Covid.

The president was also criticized for insisting vaccines would be ready before the end of 2020 – despite multiple experts warning they would take longer.

But Trump was ultimately proven right on that claim after the US approved the first vaccine for emergency use, by Pfizer, in December 2020 and began administering injections days later.

His team say he deserves credit for laying the groundwork for the current campaign, although political analysts say Biden’s administration are behind the recent speeding up of vaccination efforts.

The United States has so-far administered 95.7 million vaccine doses, according to Bloomberg. President Biden says every American adult who wants a vaccine should be able to get one by the end of May.

A total of 29.15 million Covid cases have so-far been registered across the US, with more than 529,000 people dead as a result.

How do I cancel or change my Covid vaccine appointment?