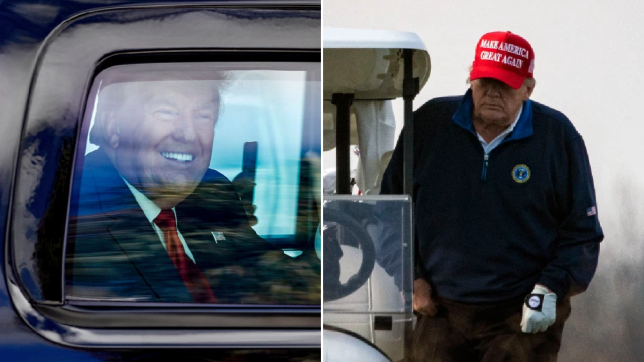 Donald Trump is said to be excitedly plotting a comeback – and is thrilled by the attention he still receives even without Twitter (Pictures: AP)

Donald Trump is plotting his comeback – and ‘finally realizes less is more’ after realizing the attention he still commands even without Twitter, pals say.

The former President of the United States is said to be enjoying life outside the White House, and feels his absence from public life is ‘building anticipation and wonderment for what’s to come.’

Trump is also said to have been stunned how much coverage was given to the three statements he has made since quitting office on January 20, Politico reported.

Close aides believe Trump has come to terms with losing access to his 88.5million Twitter followers, and hope a more low-key profile will help avoid the frequent gaffes that characterized his presidency. 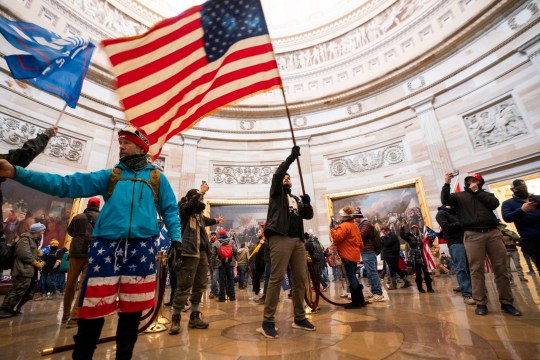 Trump faces his second impeachment trial this week, over claims he incited last month’s deadly riot at the US Capitol in Washington DC (Picture: EPA )

The former president is also said to be relaxed about his second impeachment trial, which will begin hearing arguments on Wednesday.

Trump’s daughter Ivanka and her husband Jared Kushner – both former White House advisers – have warned Trump to play it cool while the trial unfolds, over fears Trump could ‘Snatch defeat from the jaws of victory.’

And he is said to have listened, spending much of his time golfing close to his Florida home, in between giving advice to lawyers.

An aide said: ‘Right now, Trump is thinking, “I’ve got 45 votes, all I have to do is go golfing and not do anything.’

That is a reference to the 45 Republican senators widely expected to vote to acquit Trump at his impeachment.

So far, just five of the party’s 50 senators have indicated they may vote to convict him. At least 67 of the Senate’s 100 senators must vote to convict Trump for him to be found guilty, but it appears unlikely that Democrats will be able to garner the additional 12 Republican votes needed.

If cleared of inciting the deadly January 6 riots at the US Capitol, Trump will be free to run for president again in 2024.

He is said to have flip-flopped over whether he wants to run for office again, but still wields huge influence in the Republican party, and will play a key role in choosing his successor.