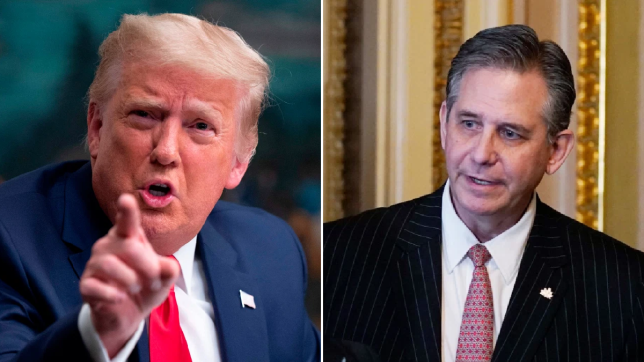 Donald Trump is said to have been infuriated by the performance of his impeachment lawyer Bruce Castor, right (Pictures: AP/Getty)

Donald Trump was enraged and infuriated by his impeachment lawyer’s rambling attempts to defend him, sources close to the former president claimed. Trump’s anger registered as an eight out of 10 as he watched his attorneys Bruce Castor and David Schoen during the first day of his trial on Tuesday.

The former president is said to have been particularly outraged by Castor’s meandering opening argument, which lasted close to an hour. That saw Castor admit he had changed his plans last minute, because Democrat ‘prosecutors’ opening salvo against Trump had been so good.

That admission is said to have stunned Trump, who watched televised proceedings from his Florida country club, and left him feeling betrayed. Castor also inadvertently suggested that it would be more appropriate to bring criminal charges against Trump, rather than an impeachment trial.

Trump is said to have been pleased with Schoen’s more spirited defense of his behavior leading up to the deadly US Capitol riots on January 6. But he still finished the day disheartened about the ongoing proceedings, according to The New York Times. 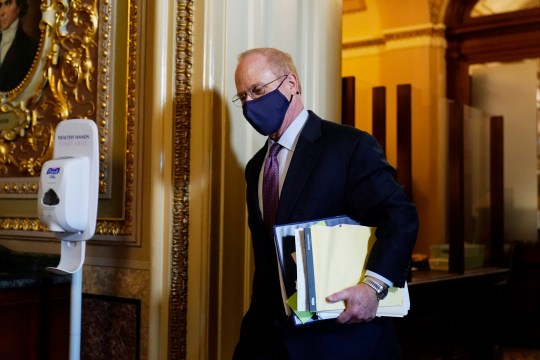 Trump is said to have been more pleased by the ‘spirited’ defense offered by his other lawyer David Schoen, pictured (Picture: EPA)

His permanent Twitter ban means Trump can no longer take to social media to defend himself – or threaten Republican senators who vote against him.

One member of Trump’s Republican party – Louisiana Senator Bill Cassidy – broke ranks to side with the Democrats, and vote for the trial to go ahead on Tuesday evening.

He says he did so because Castor and Schoen avoided presenting an articulate defense against the incitement of insurrection charge that Trump faces.

Explaining his decision to vote against Trump, Cassidy said: ‘Did you listen to it?

‘It was disorganized, random — they talked about many things, but they didn’t talk about the issue at hand.’

Tuesday’s hearing saw both sides debate whether it was constitutional to hold an impeachment trial, with senators voting 56-44 to go ahead with it.

The trial itself begins on Wednesday, with arguments from both sides. Trump is being tried for appearing at a rally hours before the January 6 riots and telling his supporters to go to the US Capitol and contest the certification of Joe Biden’s election win.

Thousands then descended on the building, forcing it to be evacuated, with four protesters and a police officer killed in the ensuing chaos.

Trump denies he is to blame for the chaos, and insists his call to protesters was protected by his First Amendment right to free speech.

And despite his team’s underwhelming first day performance, Trump is still expected to be acquitted.

So far, only six of the 50 Republican senators have indicated that they will vote to convict Trump.

At least 67 of the senate’s 100 senators must vote to convict Trump for him to be found guilty.

All 48 Democrat senators, as well as their two independent colleagues, are likely to vote to convict Trump – but that still leaves them far short of the 67 vote ‘supermajority’ needed for a conviction.

If Trump is convicted, he will lose travel and security privileges afforded to former presidents, and also be banned from running for office again.