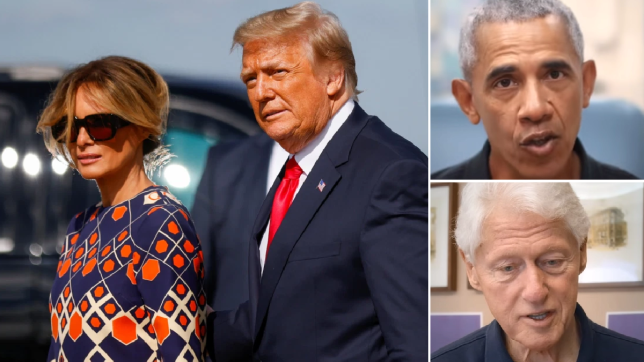 Donald and Melania Trump are the only living former president and first lady not to appear in a pro-vaccine ad starring Barack Obama, Bill Clinton, George W Bush, Jimmy Carter and their wives (Pictures: AP/Ad Council)

Donald and Melania Trump have snubbed a new advert featuring all other living former US presidents and first ladies encouraging people to get vaccinated.

The public service announcement was released on Thursday, and featured exclusive clips of Barack Obama, George W Bush, Bill Clinton and Jimmy Carter addressing viewers and urging them to take the shot when they can. But the Trumps were notably absent.

A spokesman for the US Ad Council dodged the question when asked whether the Trumps had been invited to participate, with the former first couple themselves also declining to comment.

A spokesman told Politico: ‘We just learned last week that President Trump did get vaccinated and were so pleased he advised Americans to ‘go get your shot.’

The Trumps secretly received their Covid vaccines shortly before leaving the White House in January, it was revealed last week.

Both Donald and Melania contracted Covid in October, with the former president spending three nights in hospital with a far more serious case of the virus than he initially claimed to have.

Obama and Clinton – both Democrats – as well as Bush, a member of Trump’s Republican party – have come together for a slew of initiatives in recent months to encourage unity in the wake of Trump’s divisive term in office.

They issued a joint video statement wishing Joe Biden good luck on his inauguration day, and attended the ceremony itself, which the Trumps snubbed.

Jimmy Carter, 96, and Rosalynn, 93, did not attend for practical reasons.

Former President Trump has kept a low profile since leaving office and being banned from Twitter, but issued a statement on Wednesday urging Americans to remember his contributions to the development of vaccines.

The US is on track to have administered 100 million vaccine doses in the coming days, as Covid deaths edge closer to 530,000, and recorded infections hit 29.15 million.

President Biden says all 275 million adults living in the US should be able to receive the vaccine by the end of May.

Covid IS in retreat but it won’t take much for dangerous third wave to ignite, PHE boss warns