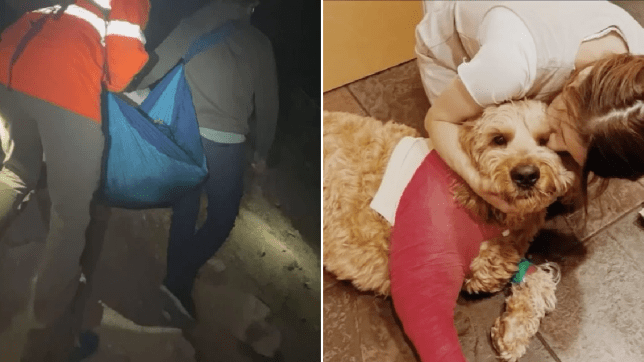 A dog was so excited to be in the wilderness at a campsite that he ran towards his owner who stood by a rock wall and jumped over it – and dropped down a 200-foot cliff. Simba’s owners feared the worst, but the four-year-old Goldendoodle miraculously survived.

Simba accompanied Wesley and Ruth Wallace to Oak Creek Canyon in Arizona on Good Friday and was running around joyously, Arizona’s Family reported on Wednesday.

‘There’s a vista that overlooks the top of it’, said Wesley, who stood on top of the rock wall. ‘And Simba came from Ruth, full blast right up to me and just jumped, cleared the rock wall and cleared all the cliff’.

‘I was wearing a hat, I dropped off the hat, I dropped myself on the floor, I was just yelling’, Ruth said. ‘There’s nothing you can do at that moment, like nothing really, just pray’.

Wesley went searching for Simba before nightfall and found the pup about 200 feet down from the vista. He and a family friend placed Simba in a hammock and each held one end, and hiked back up.

‘When he called me and told me he was still alive, I just couldn’t believe it at first, but it was really just a miracle’, Ruth said.

Simba’s right front leg sustained the worst injury and he had surgery in Phoenix. The dog’s leg was shaved and he is limping around and slowly recovering.

‘He will probably never walk the same again’, Wesley said. ‘But still an absolute miracle for falling 200 feet’.

Despite the deadly fall, the couple does not plan to deprive Simba of camping trips in the future, as they are what make him happy.

‘I don’t think I’d take that from him’, Wesley said.