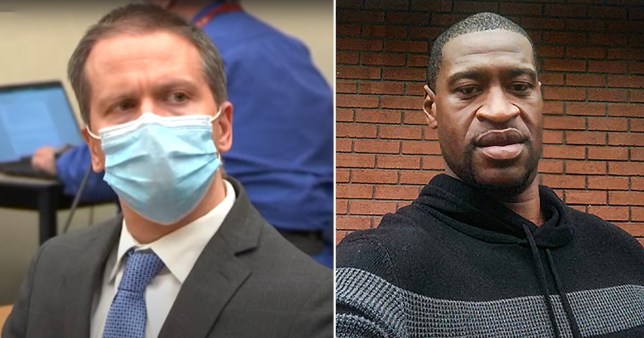 The unanimous verdict was read in Hennepin County Court and live streamed for the world to watch.

In court, Chauvin wore a mask and looked on as Hennepin County Judge Peter Cahill read the verdict. Chauvin’s eyes paced back and forth as he heard the jury found him ‘guilty’ on each of the three charges.

Judge Cahill then ordered sheriff’s deputies to take Chauvin, who was out on bail since the fall, into custody. Chauvin showed no resistance as he was handcuffed in the courtroom and escorted out.

Chauvin will be sentenced in eight weeks. The judge will decide if aggravating factors were at play to justify a higher than normal sentence for him.

The state asked for a higher sentence. Prosecutors in court filings argued that aggravating factors included that Chauvin treated Floyd with ‘particular cruelty’, that Chauvin as a cop ‘abused his position of authority’, and that children watched as Floyd was killed.

Chauvin, 45, pleaded not guilty to all three charges. He was recorded kneeling on Floyd’s neck and back on May 25 as Floyd called for his mother and cried, ‘I can’t breathe’. Floyd, 46, died that day.

Twelve jurors deliberated for about 10 hours from Monday afternoon after closing arguments until Tuesday afternoon. The jury included six white and six black or multiracial people. Seven of them were women and five were men and they ranged in age from their 20s to their 60s. They listened to 45 witnesses – 38 from the prosecution and seven from the defense.

Jurors deliberated in a government building in downtown Minneapolis and were sequestered in a hotel every night. As jurors deliberated, the nation and particularly Minneapolis braced for the decision, boarding up businesses and preparing for protests and unrest. But late afternoon on Tuesday, the tune on the streets was of celebration.

In a press conference shortly after the verdict, prosecutor Jerry Blackwell said that ‘no verdict can bring George Perry Floyd back to us, but this verdict does give a message to his family that he was somebody, that his life mattered, that all of our lives mattered, and that’s important’.

Blackwell concluded that he also hopes the verdict ‘will help us further down the road to a better humanity’.

In closing arguments on Monday, prosecutor Steve Schleicher focused on the nine minutes and 29 seconds that Chauvin knelt on Floyd on the street in Minneapolis and told jurors to use their common sense.

Meanwhile, Chauvin’s lawyer Eric Nelson in closing arguments that lasted nearly three hours asked jurors to consider the 16 minutes and 59 seconds leading up to restraint. Nelson reminded the jury that Floyd, who had underlying health condition, had consumed drugs and resisted officers who ordered him to get inside a cop car.

‘Do not let yourselves be misled by a single still-frame image’, Nelson said. ‘Put the evidence in its proper context’.

In a rebuttal, Blackwell told jurors not to believe the defense team’s ‘stories’, but rather focus on the truth and what they saw in the videos. Blackwell concluded that Floyd did not die of an enlarged heart, as the defense claimed as part of their argument.

‘You were told, for example, that Mr Floyd died because his heart was too big, you heard that testimony’, Blackwell said. ‘The truth of the matter is that the reason George Floyd is dead is because Mr Chauvin’s heart was too small’.

Chauvin’s trial was the most high-profile police misconduct case in the US in decades. It followed months of Black Lives Matter protests across the nation grappling with issues of police brutality and racial inequality.

Tensions were high on Tuesday as the public awaited the verdict and more than 3,000 National Guard soldiers and airmen were deployed to the area. Many people evacuated buildings and left downtown Minneapolis in anticipation of the decision. Meanwhile, activists gathered outside the courtroom and at the intersection of 38th Street and Chicago Avenue, where Floyd died.

Among those who celebrated, there was a feeling that justice had been served.