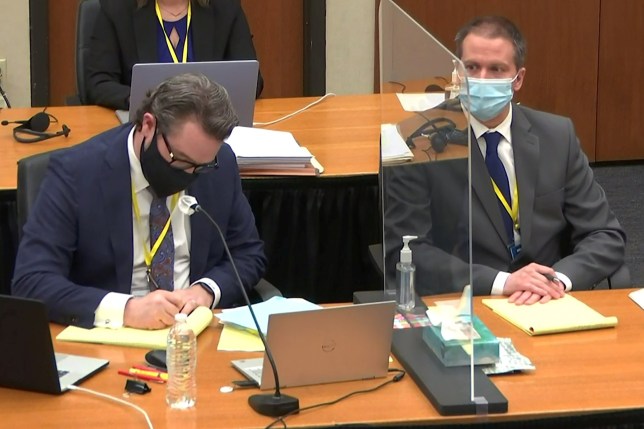 Former Minneapolis police officer Derek Chauvin spoke in his trial in the death of George Floyd for the first time – to say he declined to testify.

Chauvin on Thursday morning invoked his Fifth Amendment right not to testify in his defense, laying to rest speculation over whether or not he would take the stand.

It appeared to be the only time Chauvin’s voice was heard in court, other than in videos played to the jury of him kneeling on Floyd during the arrest on May 25.

Chauvin’s lawyer Eric Nelson questioned him about his decision on testifying. Nelson mentioned they had spoken multiple times about whether Chauvin should testify including in a ‘lengthy meeting last night’.

‘I will invoke my Fifth Amendment privilege today’, Chauvin replied.

Hennepin County Judge Peter Cahill then went through the motions of telling Chauvin that Nelson could give him advice, but that the decision to testify ultimately had to be his own.

‘Is this your decision?’ Cahill asked.

‘It is, your honor’, Chauvin said.

‘Not at this time, I don’t’, Chauvin answered.

‘Has anyone promised anything or threatened you in any way to keep you from testifying?’ the judge said.

‘No promises or threats, your honor’, Chauvin said.

Chauvin gave permission to Cahill to read his decision to the jury.

Nelson on Thursday, the fourteenth day of the trial, said the defense rested its case. The prosecution began its rebuttal. The trial will soon move to closing arguments and a decision by the jury.