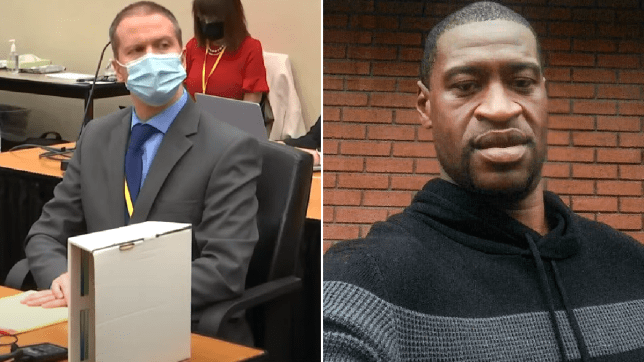 Derek Chauvin ‘betrayed his badge’ by grinding and crushing black man George Floyd to death, a prosecutor said in the murder trial that began Monday morning.

Chauvin ‘put his knees upon his neck and back, grinding and crushing him until the very breath, until the very life was squeezed out of him,’ prosecutor Jerry Blackwell said in court.

Blackwell said that Chauvin on May 25 ‘betrayed this badge when he used excessive and unreasonable force upon the body of Mr George Floyd.’

Chauvin was ‘well aware’ that Floyd was unarmed, had not threatened anyone and was handcuffed, according to Blackwell.

‘You will learn what happened in those nine minutes and 29 seconds when Derek Chauvin was applying that excessive force to the body of George Floyd,’ Blackwell said, referring to a recording of the incident. ‘You will hear his voice get heavier, you will hear his words get further and further apart, you will hear his respiration get shallower and shallower, until it finally stops.’

Blackwell added that Chauvin was informed twice that Floyd’s pulse could not be found, yet he ‘does not let up and does not get up’ even when an ambulance arrived.

‘The compression, the squeezing, the grinding, went on the same for a total of nine minutes 29 seconds,’ Blackwell reiterated.

Blackwell said the evidence his team would provide will show ‘there was no cause to use force’ against Floyd who was ‘defenseless’ and not resisting cops.

While acknowledging that Chauvin is innocent until proven guilty, Blackwell said his team would prove that the cop’s conduct ‘was a substantial cause of Mr Floyd’s death.’

‘You will learn that use of excessive and unreasonable force against a citizen is an assault,’ Blackwell said. ‘We are going to show you that putting knees on somebody’s neck, somebody’s back, was a dangerous activity, and he did it without consideration for the impact it would have on Floyd’s life.’

Floyd died on May 25 after Chauvin, a white 19-year veteran of the police department, kneeled on his neck for several minutes.

In a nearly nine-minute video of the incident, Floyd could be heard saying, ‘I can’t breathe,’ repeatedly.

A panel of 15 jurors including nine people who are white and six who are black or multiracial appeared on Monday and Hennepin County Judge Peter Cahill dismissed one.

Chauvin’s trial is expected to run Monday to Friday over the next two to four weeks.

Floyd’s death triggered numerous Black Lives Matters protests across the nation and renewed and continued calls for racial equality and an end to police brutality.

An hour before the trial was set to start, Floyd’s family, their lawyers and others spoke outside the court.

‘We came here for one thing and one thing only,’ Floyd’s nephew Brandon Williams said. ‘We came to get justice and nothing less.’

Reverend Al Sharpton said that ‘Chauvin is in the courtroom, but America’s on trial.’

Developing story, check back for updates…

Mum shares genius hack for hard-boiling eggs ahead of Easter