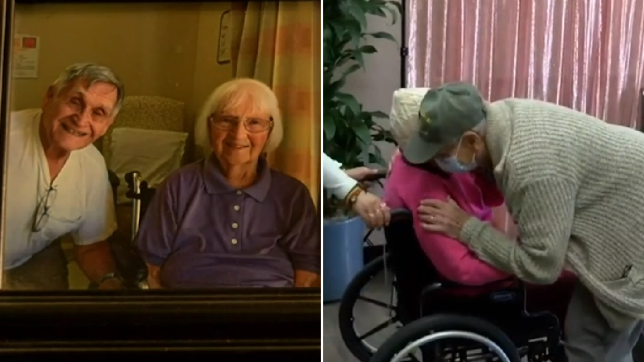 Roberta Doiron and husband of 72 years Francis enjoyed their first embrace in a year on Tuesday after having their Covid vaccines (Pictures: CNN)

A 92 year-old dementia sufferer who didn’t understand why she couldn’t see her husband of 72 years during lockdown has finally been reunited with him one year on. Roberta Doiron, 92, enjoyed a romantic reunion with husband Francis, 95, at the nursing home where Roberta lives in San Diego on Tuesday.

Francis remains at their old home, but was up early to visit his spouse every day before Covid broke out. That saw visitors banned from the facility for a year, with the Doirons forced to make do with virtual ‘dates,’ and seeing each other outside, but not being able to embrace or touch one another.

Francis says it was a relief to see Roberta while she is still able to remember him. He told CNN: ‘The closer I can be with her, next to her, the more memory I can bring up. She’s losing her memory more often because I’m not there.

‘That hurts quite a bit of her memory, I think. That’s why I’m afraid that’s beginning to jump. So I’m hoping that once I can see her more often, I can bring her memory back.’

The facility’s director of nursing Laurie Godfrey was moved to tears by the Birchs’ reunion, and said she was delighted to see the couple back together in person.

Laurie told The San Diego Union-Tribune she had noticed residents like Roberta suffer depression during Covid, as she struggled to remember why Francis was no longer able to visit her.

She agrees that physical contact is much better for patients’ wellbeing than FaceTime chats and seeing one another from a distance or through a window. 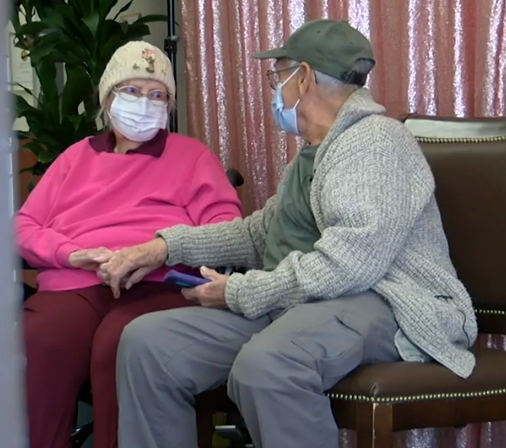 Roberta and Francis were thrilled to see one another properly again, with Francis hoping the interaction will help improve Roberta’s memory (Picture: CNN)

Francis told his wife that he now plans to visit as regularly as new rules will allow.

Speaking to his wife, he said: ‘Just know how happy I am to see you again, be able to come and visit you.

‘At least for a little while. Not as often as I like to but it’s going to work out okay.’

Vaccinations efforts are picking up steam, with more than 130 million doses administered across the US so far.

What does the winner of Great British Menu get and who are the past winners? – The Sun