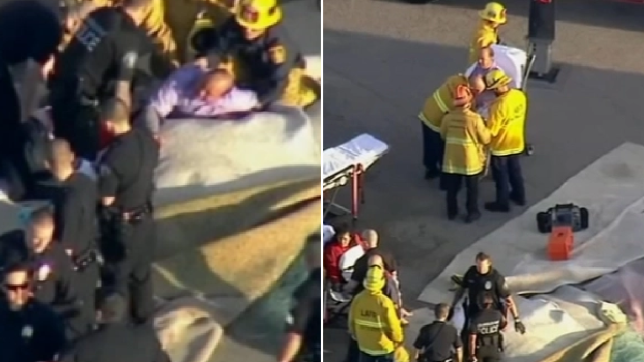 A father who drowned his two autistic sons for life insurance money he then used to buy a boat has been jailed for 212 years. Ali Elmezayen, 45, was handed the enormous sentence in Los Angeles on Thursday for what Judge John Walter called an ‘evil and diabolical scheme.’

Imposing the maximum sentence permitted, Walter added: ‘(Elmezayen) is the ultimate phony and a skillful liar…and is nothing more than a greedy and brutal killer. The only regret that the defendant has is that he got caught.’

Elmezayen drove his car off San Pedro wharf in April 2015 and pretended it was an accident. He was filmed feigning hysterics over his family after being pulled from the water shortly afterwards, and put on a stretcher. His sons Elhassan, 13, and Abdelkarim, 8, drowned in the sunken car.

Both boys had severe autism. Elmezayen survived by swimming out the driver’s side window, which he had wound down beforehand. His wife Rehab Diab, who has since divorced him, was also in the car. She couldn’t swim, and was only able to escape after a nearby fisherman threw her a flotation device. 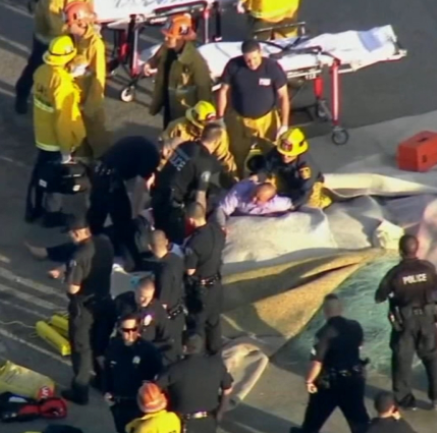 Elmezayen was filmed putting on a theatrical display of grief after being rescued from the water following the deadly crash (Picture: ABC7)

Elmezayen had planned to murder all three, and took out life insurance policies on his wife and sons before the smash, shortly after exiting bankruptcy proceedings.

He was paid $260,000 for his son’s killings, and splashed the cash on a boat, as well as his native Egypt. Elmezayen was a domestic abuser who threatened to cut his wife’s tongue and throat out if she defied him.

Explaining the chilling sequence of events on the day of the murders, prosecutor David Ryan told jurors: ‘He lined the car up to the one spot that wasn’t blocked and hit the gas, the kids buckled inside. The plan was to kill them and make it look like an accident.’

Elmezayen was living in the US illegally at the time of the murders, and had been plotting the scheme for two years.

He bought a total of eight accidental death and life insurance policies for his loved ones in 2012 and 2013, and was in line for a total of $6million had he pulled of the fraud.

Ryan said: ‘After years of physically and emotionally abusing his ex-wife and neglecting the children, (Elmezayen) bought $3.4 million in insurance on their lives, waited for two years so the insurance companies would not contest his claims, and then drove them into the ocean, leaving them to drown.

‘That was (Elmezayen’s) fraudulent scheme. It was also premeditated murder.’

Elmezayen was caught after he was recorded ringing his insurers to check his policies would pay out just two weeks after the two year period had passed, but before the killings took place.

The subsequent car crash raised alarm bells among insurers, and prompted the FBI to investigate. He was arrested in November 2018.