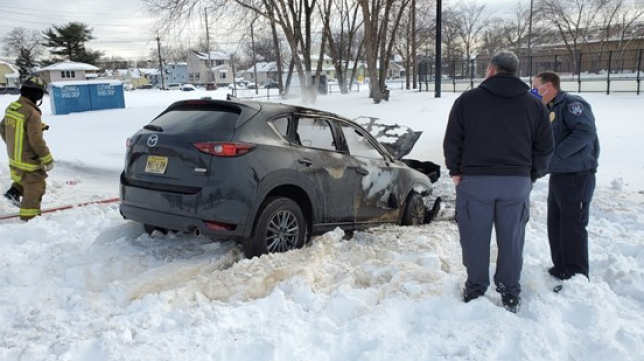 A married dad of three died in this Mazda SUV after it caught fire while he tried to rev it out of a snowy patch it had gotten stuck in (Picture: Little Ferry PD)

A 62 year-old dad burned to death after repeatedly revving his snowed-in car until it caught fire. Police are waiting for dental records to formally identify the unnamed victim, said to be a married father of three, after the Wednesday morning blaze in Little Ferry, New Jersey.

The Mazda was spotted stuck in the snow by workers at Losen Slote Creek Park, around 10 miles north of New York City, prompting them to call police.

An officer who arrived spoke to the Mazda’s driver, and told him to stop revving the car’s accelerator to try and get out of the snow, because a tow truck was en route. But the driver ignored him, with the car becoming overheated and making popping sounds igniting shortly afterwards.

Officers already on the scene tried to save the driver, but the car’s doors were locked, and its interior quickly became consumed by the flames, killing him. They tried breaking windows to free the driver, but were unable to do so because of smoke so thick they could no longer see the driver.

It is unclear why the man ignored requests to stop revving the vehicle. One friend, who didn’t wish to be named, told NBCNY that he’d taken a piece of the burned SUV to remember the victim by.

That pal also speculated on what may have caused the fire, saying: ‘He could have just been embarrassed that he did something stupid and he just wanted to get out of there without a scene. And maybe he just overreacted.’

‘I just found his cellphone here … I wish I could call him but I can’t. I took a part of his vehicle just to keep as a memory.’

The tragedy happened as New York and New Jersey were blanketed by up to two feet of snow, leaving millions of locals housebound, and unable to move their snowed-in cars.

An investigation into how the Mazda caught fire continues.