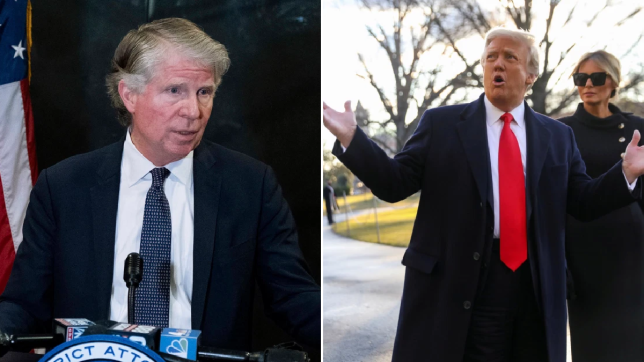 Manhattan’s most senior prosecutor says he has finally obtained Donald Trump’s tax returns after the ex-president spent 18 months trying to block their release. Cyrus Vance announced he’d obtained the document on Thursday, after the US Supreme Court ordered Trump to hand them over on Monday.

The documents, which were released by Trump’s accountancy firm Mazars USA, are currently protected by secrecy rules, and can only be viewed by a grand jury who will ultimately decide whether Trump should face charges.

Vance remained tight-lipped in the wake of the documents release, sharing a three word statement which said: ‘The work continues.’ He has hired prosecutor Mark Pomerantz, who is famed for bringing Mafia dons to justice, to help assist him.

No indication has been given as to when the probe might wrap up. Vance’s investigation centers on whether the former president, who made billions as a property developer, inflated the value of his assets to obtain more favorable loan conditions, and tax benefits.

The prosecutor is also probing ‘hush-money’ payments said to have been made on Trump’s behalf to two women he is accused of cheating on third wife Melania with. Trump denies all allegations of wrongdoing.

When Vance first requested the financial documents in August 2019, the president’s lawyers fought him by claiming Trump was immune from investigation while he was president. That claim was struck out by the Supreme Court in July 2020, prompting Trump’s lawyers to return to a lower court.

They alleged that a subpoena (legal demand) used to try and obtain the documents was politically motivated and that Vance, a Democrat, was harassing Trump.

That attempt at blocking Trump’s papers from being released was rejected at a subsequent appeal, with the Supreme Court refusing to overturn the ruling Monday.

Trump himself branded Vance’s probe a ‘fishing expedition’ and ‘a continuation of the witch hunt – the greatest witch hunt in history.’

Last year, The New York Times obtained some of Trump’s financial records, which showed that he had paid just $750 income tax in 2018, and none at all in 11 out of 18 recent years after his companies ran up huge losses.