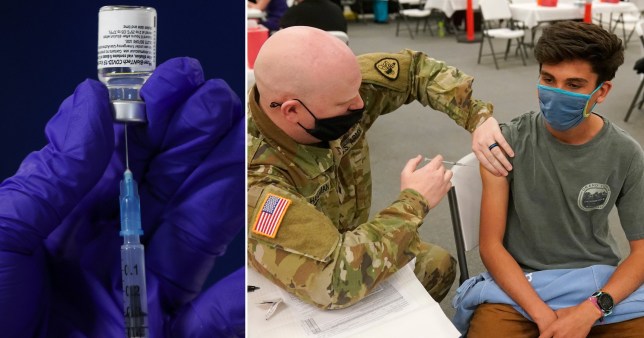 The Pfizer vaccine is being widely used in the UK and the US (Picture: AP/Getty)

Pfizer has said it’s vaccine provides protection against Covid for at least six months – including the South African variant that many feared had evolved to evade antibodies.

The company made announcement this morning following a series of clinical trials in the US, and has said its coronavirus jab remains more than 91% effective against disease with any symptoms for a minimum of six months after the second dose.

Pfizer/BioNTech add that their vaccine appears to be fully effective against the worrying B.1.351 variant of the virus, which is the dominant strain circulating in South Africa. Researched have feared for months that this variant of the virus may be resistant to the effects of a vaccine. 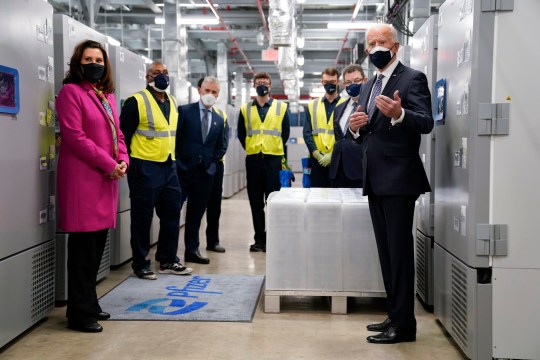 ‘The high vaccine efficacy observed through up to six months following a second dose and against the variant prevalent in South Africa provides further confidence in our vaccine’s overall effectiveness.’

The drug maker has been studying the effectiveness of the vaccine in more than 46,000 volunteers and has recorded 927 cases of Covid in that group.

Pfizer’s statement added: ‘From the 927 confirmed symptomatic cases of Covid-19 in the trial, 850 cases of COVID-19 were in the placebo group and 77 cases were in the BNT162b2 group, corresponding to vaccine efficacy of 91.3%.

’32 cases of severe disease, as defined by the CDC, were observed in the placebo group versus none in the BNT162b2 vaccinated group, indicating that the vaccine was 100% efficacious in this analysis against severe disease by the CDC definition.

‘Twenty-one cases, as defined by the FDA, were observed in the placebo group versus one case in the BNT162b2 vaccinated group, indicating 95.3% efficacy by the FDA definition.’

The news comes just a day after Pfizer announced its vaccine is 100% effective in children aged 12 to 15-years-old. 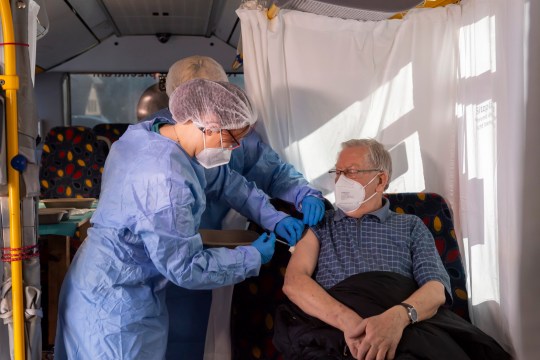 Pfizer’s vaccine is being used around the world (Picture: Getty Images)

Pfizer’s findings provide a major boost to countries where its vaccine, giving world leaders assurance that the jab keeps the vast majority of people safe from Covid for several months. The findings may help guide vaccine roll-outs and when booster jabs may be required.

According to the FDA, severe disease defined as any one or a combination of the following; raised respiratory rate indicating respiratory distress, raised heart rate, an oxygen saturation level of 93% or lower. respiratory failure severe enough to need additional oxygen or ventilation, a blood pressure drop indicating shock, significant kidney, liver or neurological dysfunction, admission to an intensive care unit or death.

Pfizer added: ‘In South Africa, where the B.1.351 lineage is prevalent and 800 participants were enrolled, nine cases of Covid-19 were observed, all in the placebo group, indicating vaccine efficacy of 100%.

‘Vaccine safety has now been evaluated in more than 44,000 participants aged 16 years and older with more than 12,000 vaccinated participants having at least six months of follow-up after their second dose.’