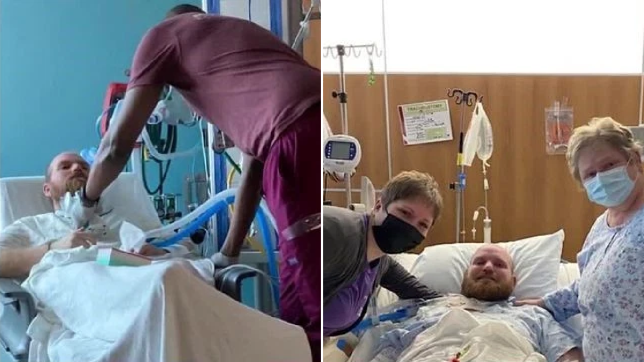 A coronavirus patient who was on a ventilator for more than 100 days is finally on the mend after receiving a double lung transplant. Jake Immink, 31, is Nebraska Medicine’s first Covid-19 survivor to get the long-awaited surgery.

Jake, a cattle rancher, was hospitalized with coronavirus since November and on a ventilator unable to breathe on his own. Doctors first told Jake about the possibility of giving him a lung transplant in December and he got on the waiting list.

It wasn’t as simple as waiting. Jake took a series of health tests and even went on a keto diet in preparation for the possible procedure. Last week, doctors finally told him he was selected. During the eight-hour surgery, Jake’s family waited and prayed.

When Jake was out of the operating room and woke up, he was able to breathe on his own, after 128 days of relying on a ventilator, his sister Esther Bond told KETV.

‘His legs were shaking … But … It was emotional,’ Esther said. ‘After I got done with the video he just cried. It’s hard to believe almost.’

Esther said her brother’s complexion looked ‘so good’ in comparison to his past four bedridden months.

‘You’re a miracle!’ she recalls telling him while crying. ‘Oh my gosh.’

Jake has since been able to get up and move on his own.

‘He has been walking the hallways, like yesterday he walked 750 feet in the morning,’ Esther said on Wednesday.

Jake is ‘just happy to be alive and breathing,’ she added.

An update on Jake’s GoFundMe fundraiser page on Tuesday stated that he was still in the hospital and had another chest tube removed, leaving only one in his body.

‘He’s been working on having a system down as times to walk and he has certain meds that have to be taken at the same exact time every day,’ Esther wrote on the page. ‘He’s working hard at achieving his goals!’

As of Wednesday, the US had more than 30million Covid-19 cases and more than 551,000 deaths, according to John Hopkins University’s Coronavirus Resource Center. More than 148 million doses of vaccines had been administered across the country as of Tuesday, Bloomberg reported.