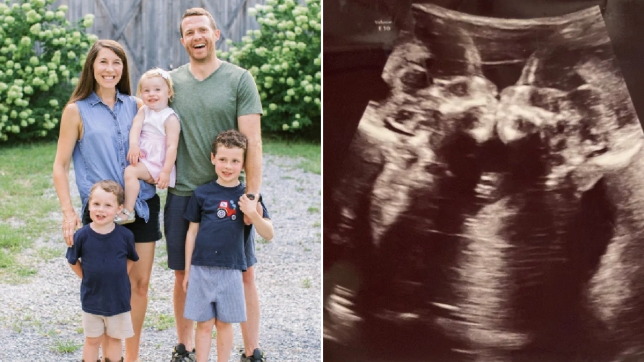 Dwight Castle and wife Stephanie are expecting conjoined twin girls next month, with doctors saying they should be able to safely separate the infants (Pictures: WKRG)

A pastor and his wife who are parents to three young children are now expecting conjoined twin baby girls. Dwight Castle and wife Stephanie will welcome the girls – who they have already named Susannah Jane and Elizabeth Florence – in April. The girls share a liver and part of their small intestine.

Doctors believe they can safely separate the sisters, with Dwight and Stephanie preparing to divide their time between their home in Birmingham, Alabama, and Philadelphia, where the separation will be performed. Dwight explained: ‘We leave for Children’s Hospital of Philadelphia in less than two weeks for the delivery process.

The Castles discovered Stephanie was pregnant last September, and discovered they were having twins the following month. They found out the girls were conjoined in November 2020, during a scan at the University of Alabama Birmingham’s Maternal Fetal Medicine hospital.

Stephanie also underwent a test called a fetal echocardiogram. That identified a potentially serious congenital heart condition in one of the babies. The Castles traveled to the Children’s Hospital of Philadelphia for specialist advice, with doctors there later ruling out the heart condition, to the relief of the expectant parents.

They also told the Castles that it would be possible to separate their unborn daughters, who are currently joined at the abdomen, WKRG reported.

The odds of having conjoined twins are as low as one in 189,000. Advances in medical technology means conjoined twins can often be safely separated, depending on what – if any – vital organs they share.