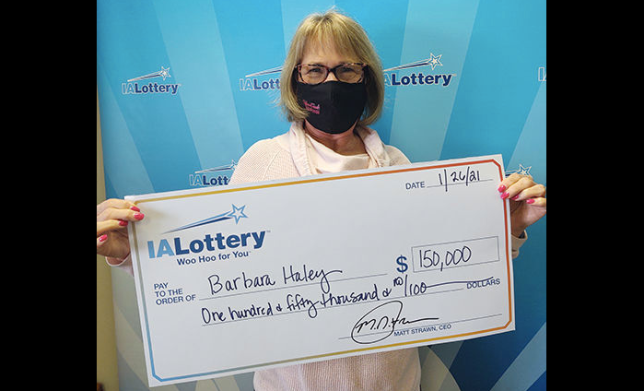 Barbara Haley revealed she and husband Steve won a $150,000 lottery jackpot after he accidentally opted for a wrong number (Picture: Iowa State Lottery)

A couple won a $150,000 lottery jackpot after the husband accidentally chose one of their usual numbers wrongly. Steve Haley meant to select a 9, as he and wife Barbara usually do, but ended up selecting the number 8 instead.

That mistake ended up winning the couple the huge sum, rather than the $300 they’d have taken home had Steve stuck with the agreed digits.

They found out they had won when they went to buy their groceries, and Steve approached the customer service desk to check his ticket.

Barbara recalled: ‘I started buying groceries and Steve went to cash it in.

‘That’s when we found out. I get paged to the front while I’m shopping, and they’re like, “Barb Haley, come to customer service.” I’m like, “Oh, he probably just doesn’t know where I am in the store.”‘

Barbara claimed their win on Tuesday, and also revealed how the winning ticket had been bought from a local car wash, which she says is her and her spouse’s ‘lucky place’ to buy lottery tickets.

Mystery of Russia’s ‘Dead Mountain’ where 9 hikers found ‘naked, missing eyes and tongues’ may have been SOLVED