The police officers who pepper-sprayed a ‘suicidal’ nine-year-old girl have been suspended from their jobs.

The action comes after police released body cam footage from January 29 showing the moment cops in Rochester, New York, handcuffed a distressed schoolgirl and then sprayed her in the face with a ‘chemical irritant’.

The footage – which shows the girl screaming for help – led to international outrage and even condemnation from the likes of New York governor, Andrew Cuomo.

Amid pressure for action to be taken, police officials on Monday night said that an unknown number of police officers have been suspended from Rochester Police Department pending the outcome of an internal police investigation, reports ABC 7.

The suspensions have followed an incident on Friday, January 29, when police were responding to a report of ‘family trouble’. 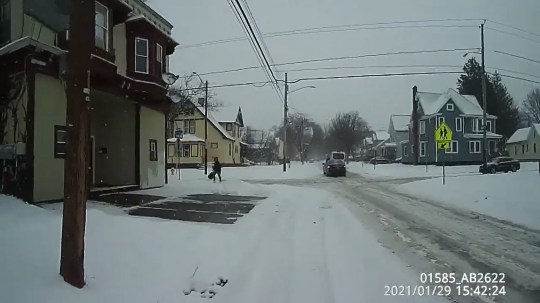 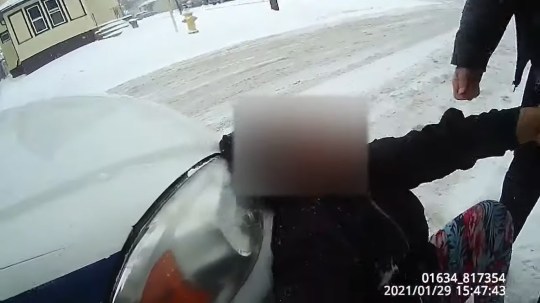 The girl, aged 9, then drops to the floor while screaming she wanted her dad (Picture: Rochester NY Police)

Upon arrival officers said they were told by a nine-year-old girl’s mum that she was suicidal, and wanted to harm herself and others.

Body cam footage shows police trying to put the girl in the back of a patrol car, the girl falling to the floor and then cops putting her into handcuffs while she was face down in the snow.

An officer then tried to force her into the car and told her to sit up, and added: ‘You’re acting like a child.’

A struggle ensued and then a female officer can be seen shaking the can of pepper spray and deployed it in the girl’s face.

The girl screamed at the end of the second video: ‘Please wipe my eyes. Wipe my eyes please.’ 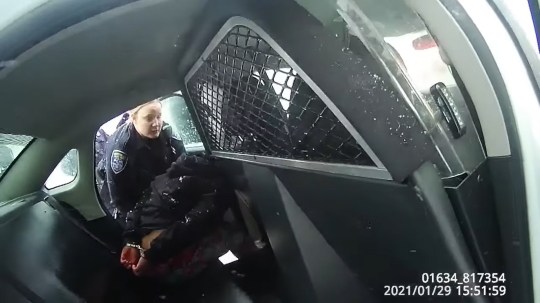 The officers forced her into the car while telling the girl was ‘acting like a child’ (Picture: Rochester NY Police)

The girl was taken to a local hospital to receive ‘the services and care that she needed’ and has since gone back to her family.

In a statement condemning the incident, New York governor Andrew Cuomo said: ‘As a human, this incident is disturbing and as a father, it’s heartbreaking-this isn’t how the police should treat anyone, let alone a 9-year-old girl.’

‘Rochester needs to reckon with a real police accountability problem, and this alarming incident demands a full investigation that sends a message this behavior won’t be tolerated.’

The Mayor of Rochester, Lovely Warren, added: ‘What happened Friday was simply horrible, and has rightly outraged all of our community.