Police officers were filmed kneeling on the back of a father-of-two whose family says died in the same way as George Floyd during an arrest. Mario Gonzalez, 26, died on April 19 after police in Alameda, California, tried to restrain him and place him in handcuffs.

Shocking body cam footage released on Tuesday shows how officers knelt on Gonzalez’s back while their suspect, pinned face down on the ground, can be heard gasping for breath and wheezing throughout the video.

He died just a few minutes later and police reported afterward that Gonzalez died of a ‘medical emergency’. His official cause of death, however, remains unknown pending the outcome of an autopsy.

Alameda Police say they tried to arrest Gonzalez after receiving multiple calls about a drunk man in the street with two shopping baskets in his hands. 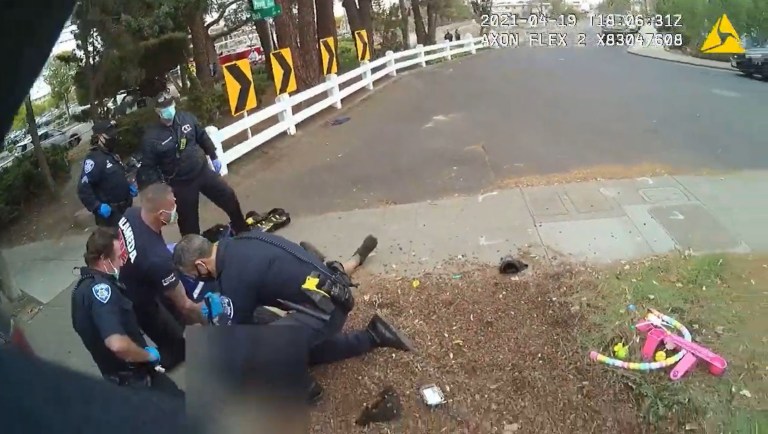 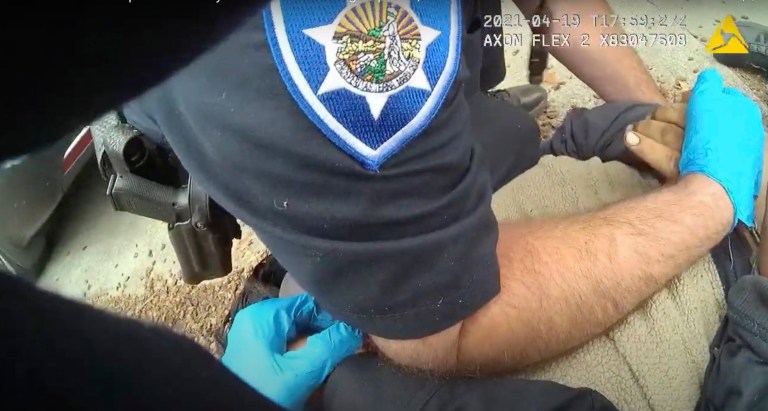 Speaking at a press conference, his brother, Gerardo Gonzalez, called police actions seen in the body cam footage ‘unnecessary and unprofessional’, and claimed his loved one died in the same way as George Floyd, reports KNTV.

‘Everything we saw in that video was unnecessary and unprofessional. The police killed my brother in the same manner that they killed George Floyd,’ Gerado Gonzalez said.

A lawyer representing the Gonzalez family strongly criticized a police report that said ‘at that time, the man (Gonzalez) had a medical emergency’.

Lawyer, Julia Sherwin, slammed that explanation from police as ‘misinformation’ and compared the police report to that of the filed after black man Floyd was murdered by Derek Chauvin in Minneapolis last year, The New York Times reported.

Sherwin told the outlet that Gonzalez’s family was also upset ‘with why the police used force in the first place’.

‘His death was completely avoidable and unnecessary,’ she said.

‘Drunk guy in a park doesn’t equal a capital sentence.’

Cops said that they were called to Gonzalez’s location at around 10:45am on April 19, after a 911 caller told police that Gonzalez was ‘at the park with two Walgreens baskets with some alcohol bottles’.

Body camera footage from the responding cop, officer Eric McKinley, shows how he approaches Gonzalez in the park. 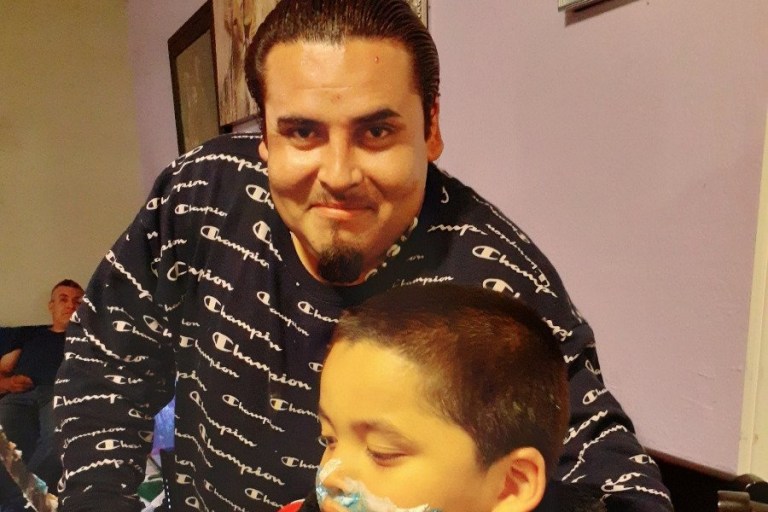 Gonzalez had no underlying health conditions, according to his family (Picture: GoFundMe)

When asked by officers how he was feeling, Gonzalez said: ‘Well, I’m feeling alright I guess’.

Gonzalez is then seen telling officers that ‘something happened,’ while they attempt to push him, for more information.

The officer then calls for another officer to investigate ‘any walkouts’ at the local Walgreens, before telling Gonzalez he is ‘worried about this open container’ of alcohol.

After further dialogue, McKinley tells Gonzalez that if he does not provide ID, officers would have to ‘take him’.

Another officer then tries to tell Gonzalez that they need his ID to include in their reports.

Officers then tell Gonzalez to keep his hands out of his pockets while he appears to stand on tree stumps.

The two officers can then be seen grabbing his arms as one of them tells him, ‘Come over here, we don’t want you to fall down.’

Cops then put his arms behind his back and tell him to ‘just relax.’

Gonzalez replies ‘no, I didn’t do nothing’, as police tell him not to resist.

‘Stop resisting us, don’t fight us,’ an officer says. Gonzalez again responds: ‘I didn’t do nothing. Please stop.’

Gonzales is then thrown to the ground and officers climb onto his back, putting pressure onto it with their knees, according to body cam footage. 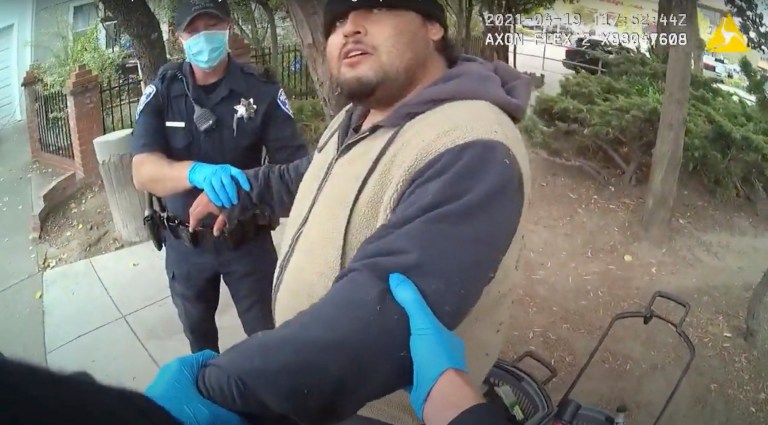 The video goes on to show officers pinning Gonzalez to the ground during the arrest that ended in his death (Picture: Alameda Police Department via AP)

Officers appear to struggle to restrain Gonzalez while he lies face down to the ground. An officer continues to use his knee to keep Gonzalez pinned to the floor while cops try to arrest him, the video appears to show.

An officer then appears to remove his knee from Gonzalez’ back after several minutes.

One of the officers then says, ‘We have no weight on his chest’ after having struggled with him on the ground for nearly five minutes.

Officers finally push him onto his side as one of them uses his police radio to say ‘he has gone unresponsive.’

More officers then appear at the scene as one of them orders to ‘start CPR’ and notes that he has ‘no pulse.’

The Gonzalez family said the beloved relative was healthy and ‘suffered no medical conditions.’ 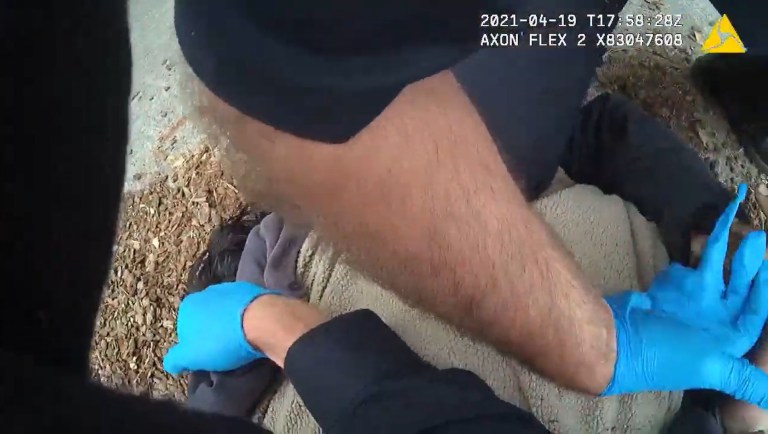 The body cam footage was made public on April 27, 2021 (Picture: Alameda Police Department)

Three officers, have been put on paid leave while the sheriff’s office and district attorney investigate the incident, officials said.

Gonzalez’s mother, Edith Gonzalez, said that her son leaves behind his a four-year-old son, KNTV reported.

A GoFundMe has since been started for the Gonzalez family who wrote on the fundraiser that ‘Our fight for justice remains re-affirmed after what we witnessed.’

The three officers put on leave were Eric McKinley, Cameron Leahy and James Fisher, a spokeswoman said on Tuesday. When asked for more details about the death of Mr Gonzalez, she referred to the police department’s previous news releases about the encounter, the New York Times reported.