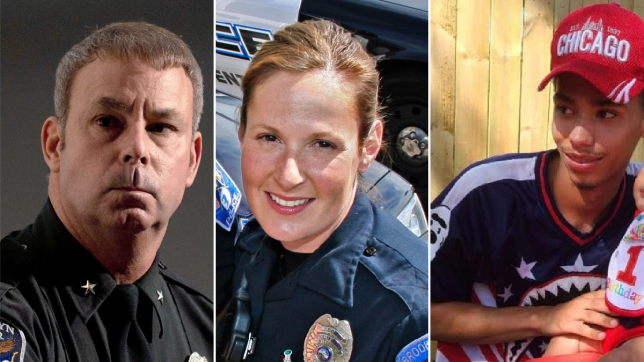 The police officer who fatally shot black man Daunte Wright in Brooklyn Center, Minnesota, on Sunday has resigned, as has the police chief who defended her.

Kim Potter, who was with the Brooklyn Center Police Department for 26 years, sent a letter to city officials on Tuesday stating her resignation, effective immediately, according to her union Law Enforcement Labor Services.

‘I have loved every minute of being a police officer and serving this community to the best of my ability, but I believe it is in the best interest of the community, the department and my fellow officers if I resign immediately’, wrote Potter, 48.

The police department had placed Potter on administrative leave after she shot and killed Wright, 20, during a traffic stop over an expired vehicle registration. Body camera footage showed an officer trying to handcuff Wright and that he broke free, got back inside his vehicle and drove off.

Potter then shouted, ‘Taser, Taser, Taser’, but fired a shot from her handgun instead, and then said, ‘Holy shit, I just shot him’.

Brooklyn Center Police Chief Tim Gannon on Sunday called it ‘an accidental discharge’. During a press conference on Monday, Gannon reiterated that from watching the bodycam footage, he believed that Potter was trying to use a Taser on Wright and pulled the gun instead.

Wright died of a gunshot wound to his chest, according to the Hennepin County Medical Examiner’s office.

His death sparked two nights of protests in the city about 10 miles from where black man George Floyd was killed last May. The unrest upped tensions around Minneapolis, where former police officer Derek Chauvin’s trial in the death of Floyd continued on its third week.

Potter was licensed as a police officer in Minnesota in 1995. She graduated from Saint Mary’s College in Winona the prior year and majored in criminal justice.