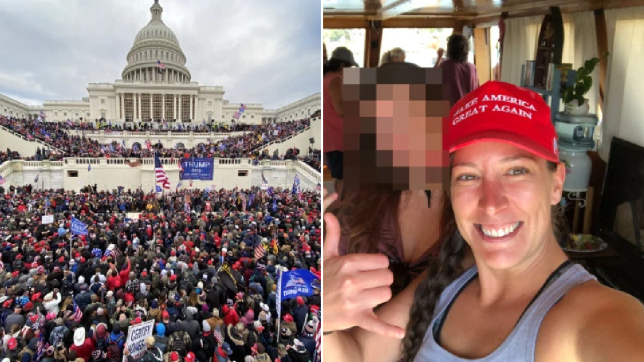 The US Capitol Police officer who fatally shot Ashli Babbitt, a Donald Trump fan who breached the Capitol building during the January 6 insurrection, has been cleared of criminal wrongdoing.

Federal prosecutors on Wednesday said that the officer, whose identity was not revealed, will not face charges. There was not sufficient evidence to prove that Babbitt’s civil rights had been violated, according to prosecutors.

‘The investigation revealed no evidence to establish that, at the time the officer fired a single shot at Ms Babbitt, the officer did not reasonably believe that it was necessary to do so in self-defense or in defense of the Members of Congress and others evacuating the House Chamber’, the office of Acting U.S. Attorney Channing Phillips of Washington, DC, stated in a press release.

‘Acknowledging the tragic loss of life and offering condolences to Ms Babbitt’s family, the US Attorney’s Office and US Department of Justice have therefore closed the investigation into this matter’.

Babbitt’s family was informed of the decision earlier on Wednesday.

Babbitt, 35, was among thousands of supporters of then-President Trump who breached the Capitol in an attempt to stop Congress from certifying President Joe Biden’s victory.

Graphic cell phone videos captured the moment that the Capitol police officer fired at Babbitt, wearing a Trump flag as a cape, as she climbed through a broken window pane in the Speaker’s Lobby.

On the day before she died, Babbitt wrote on her Twitter account, which has since been deleted: ‘Nothing will stop us… they can try and try and try but the storm is here and it is descending upon DC in less than 24 hours… dark to light!’

Criminal charges against officers involved in fatal shootings while on duty are rare in Washington, DC. Records show that the US attorney’s office has not once filed charges against an officer in such an instance.