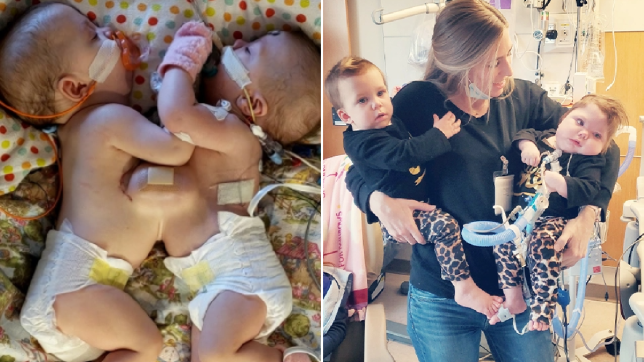 Remi and Reese Erickson are recovering at home four months after surgery to separate the twins, who were born joined at the chest (Pictures: Children’s Minnesota)

A pair of previously conjoined twin sisters are on the mend after undergoing surgery to separate them. Remi and Reese Erickson are recovering at home in Minneapolis after the seven hour procedure in December 2020, which took place when they were 13 months old.

A team of 19 medics, including surgeon Dr Joseph Lillegard, worked to separate the sisters, who were joined at the chest and shared part of a liver. The procedure was the third time Dr Lillegard had separated conjoined twins.

He said: ‘It’s an emotional journey with the family because you are preparing them for the possibility things don’t go the way you hope them to go.’ Happily, the operation was a success, with Remi and Reese’s family delighted with the result.

Their dad Robert told CBS Minnesota: ‘We had gotten so used to seeing them conjoined, and once the separation happened, it was like they were reborn.’

Mom Kate shared how she found out she was expecting conjoined twins at 17 weeks pregnant, and that she felt ‘instant love’ on seeing her babies for the first time after they were born.

The babies spent the first year of their lives in Children’s Minnesota hospital preparing for surgery.

Doctors were shocked to discover being joined to Remi had saved Reese from a heart condition that likely would have killed her.

They branded the quirk ‘remarkable.’ 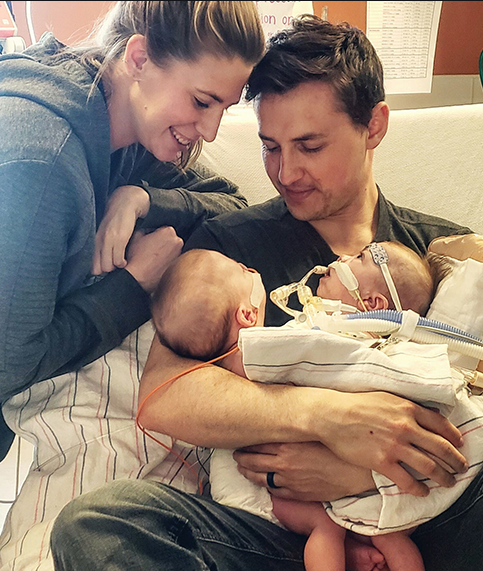 The girls are back home with mother Kate and father Rob, with the youngsters’ parents thrilled by their progress (Picture: Children’s Minnesota)

Remi is now up and about and is expected to have no lasting health effects from being a conjoined twin.

Reese has breathing issues and will require lifelong care for her heart condition, but she continues to improve, to the delight of her family.