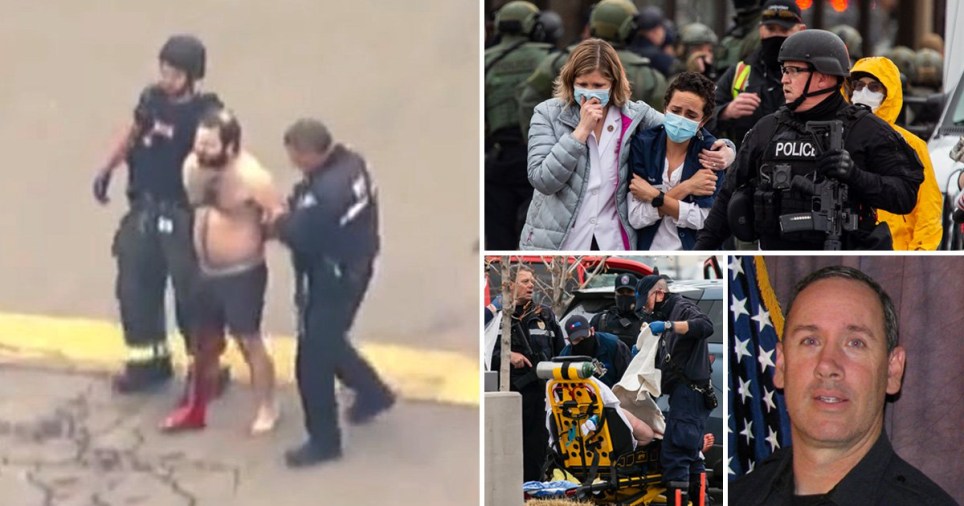 Ten people have lost their lives, including a police officer, after a gunman opened fire at a supermarket in Boulder, Colorado.

Video footage shows a shirtless suspect bloodied and limping being led away in handcuffs as he was arrested yesterday afternoon.

Eric Talley, 51, was named as the officer killed at the King Soopers store in Boulder’s Table Mesa area.

The 11-year Boulder Police veteran was first on the scene after responding to reports of shots being fired and police carrying a rifle.

Mr Talley, who leaves behind seven children, had been looking for a less dangerous job, according to his father.

It is thought the unnamed gunman acted alone, and authorities offered no possible motive for the bloodshed. 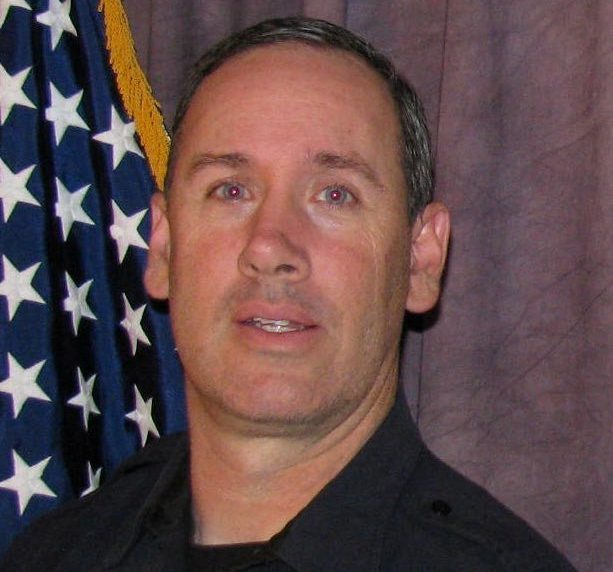 Dad-of-seven Eric Talley was looking for a less dangerous job, according to his family (Picture: Reuters) 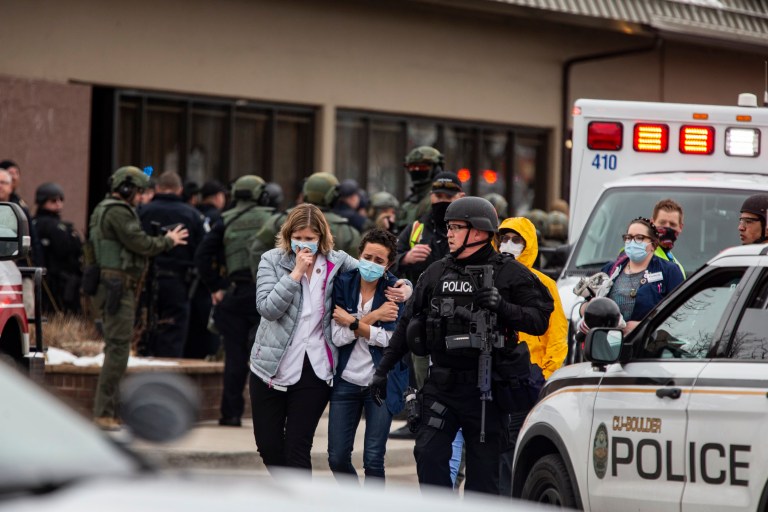 Authorities are yet to suggest a motive behind the attack (Picture: Getty Images)

Sarah Moonshadow, 42, was at the checkout with her adult son Nicholas when shots started going off.

The pair ducked for cover and listened to the ‘repetitive shots’ before making a run for it.

Ms Moonshadow said she tried to attend to a victim she saw lying on the pavement just outside the store, but her son pulled her away, telling her, ‘We have to go.’

Breaking down in tears as she recalled her ordeal, she added: ‘I couldn’t help anybody.’

Ryan Borowski was also in the store and said he heard two loud bangs and started running after the third.

He told CNN: ‘I didn’t see a shooter, I just saw terrified faces running toward me. And that’s when I turned and ran the other direction. 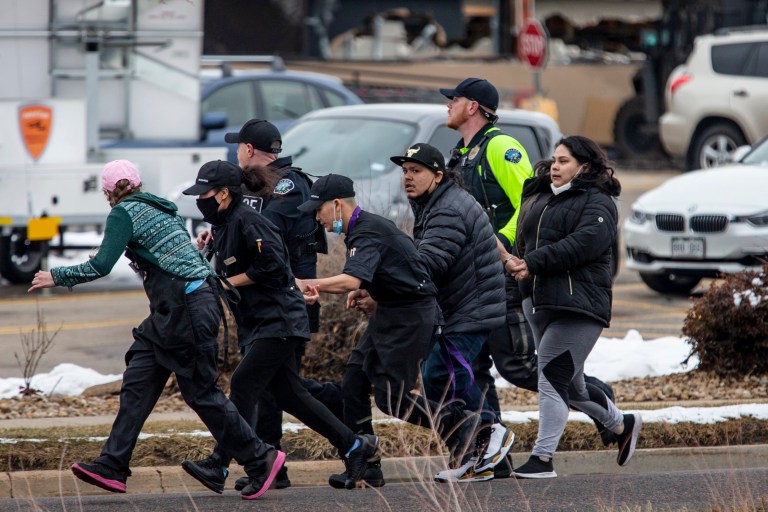 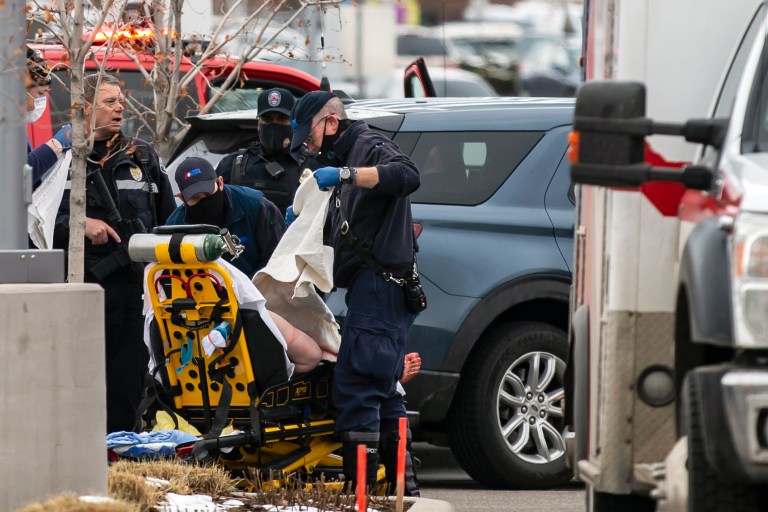 A person is loaded onto a stretcher after yesterday’s fatal shooting (Picture: Getty Images)

‘Employees showed us the way, and we told employees what was going on, so everybody helped each other and ran to safety as quickly as we could.’

Explaining how the attack made him feel like nowhere is safe anymore, he added: ‘This feels like the safest spot in America, and I just nearly got killed for getting a soda and a bag of chips.’

Police said the accused gunman was taken to a hospital for treatment of injuries he sustained in the violence but did not explain how he was hurt. There was no word on when he might face an initial court appearance.

TV footage shows the shirtless, bearded man in boxer shorts being led away from the store limping and in handcuffs, before he was placed on a stretcher and loaded into an ambulance. One of his legs appeared covered in blood.

The killings added to a long line of mass shootings in Colorado accounting for some of the most shocking episodes of gun violence in modern US history.

In 2012, a young man dressed in tactical gear burst into a movie theatre in the Denver suburb of Aurora during a midnight screening of the Dark Knight Rises and opened fire on the audience, killing 12 and wounding 70.

In 1999, a pair of students went on a shooting rampage at Columbine High School near Littleton, Colorado, murdering 12 classmates and a teacher before taking their own lives.

Video from yesterday captured by an onlooker, apparently while the shooting was still in progress, was posted to social media and aired on TV stations. 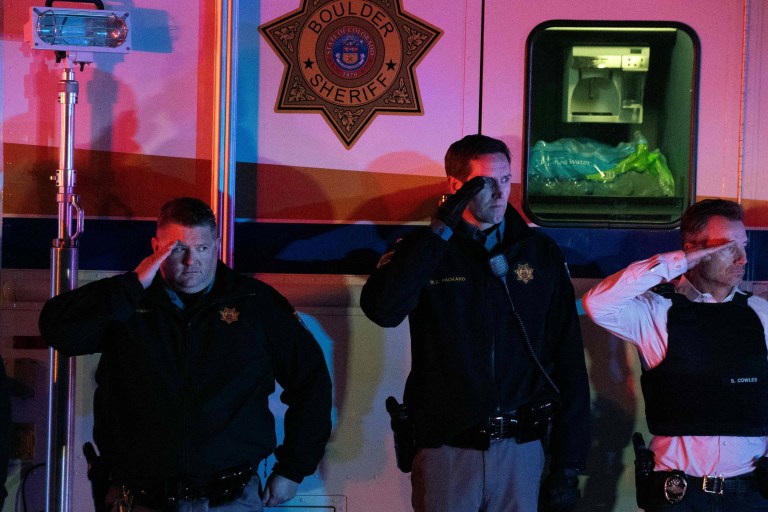 Officers salute as the motorcade carrying Eric Talley is taken away from the scene (Picture: AFP/Getty Images) 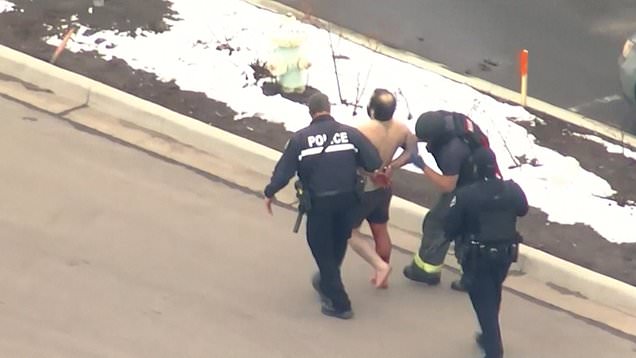 An unnamed suspect wearing only boxer shorts was seen being arrested 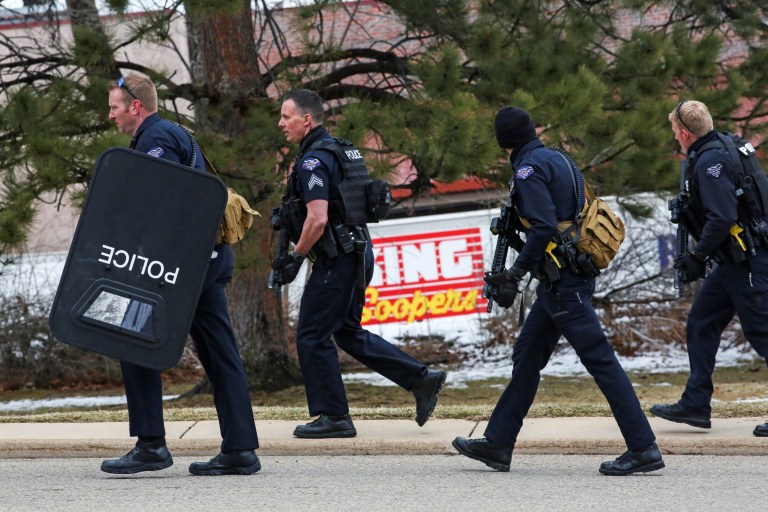 Police are yet to say how the suspect was injured (Picture: Reuters)

It showed two bodies lying in the grocery store parking lot, before the person with the camera walks inside and films a third body, as three shots are heard in the background.

The United Food and Commercial Workers International Union, Local 7, which represents 32 employees at the King Soopers outlet, credited some of the grocery workers with helping customers escape through a rear exit.

It also thanked customers and emergency responders who ‘acted swiftly to prevent even greater loss of life.’

He added: ‘He was by all accounts one of the outstanding officers of the Boulder Police Department, and his life was cut too short.’

Describing the incident as a ‘tragedy and a nightmare’, he added: ‘These were people going about their day, doing their shopping. I promise the victims and the people of the state of Colorado that we will secure justice.’