The group interrupted traffic to send a message to President Biden to push through his climate agenda with his ‘Build Back Better’ plan.

‘Dear commuters: we are interrupting traffic this morning not to annoy you, but to force the public to confront the true dangers of unchecked climate change,’ the group posted to their social media accounts. 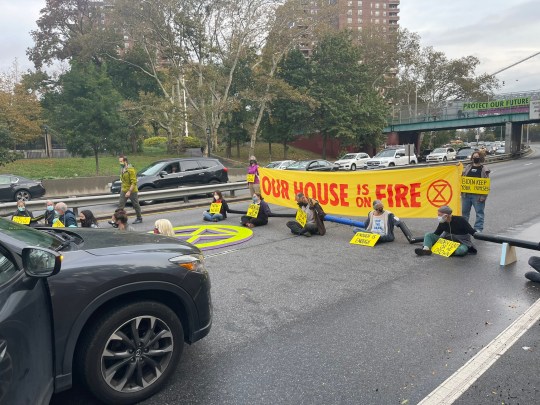 ‘If we do not act today, if @potus does not act today, New York City will be underwater by 2100. So we’re sorry to delay you today, but this is literally a matter of life or death.’

While Biden pledged to cut US emissions in half by 2030, the group worries two key points of his climate plan will get cut by congress.

Although he pledged to cut US emissions in half by 2030, his climate agenda is on the brink of collapse in Congress. 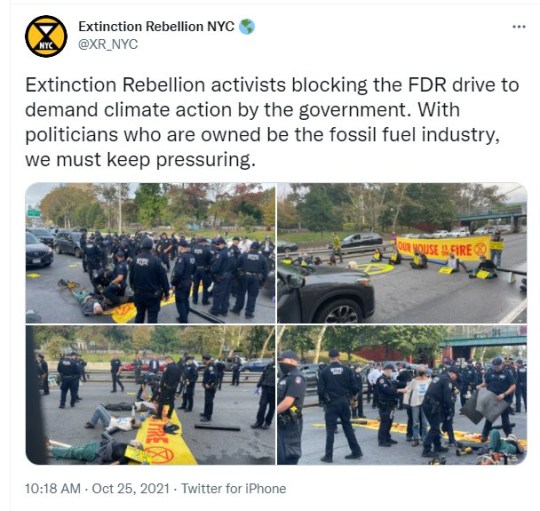 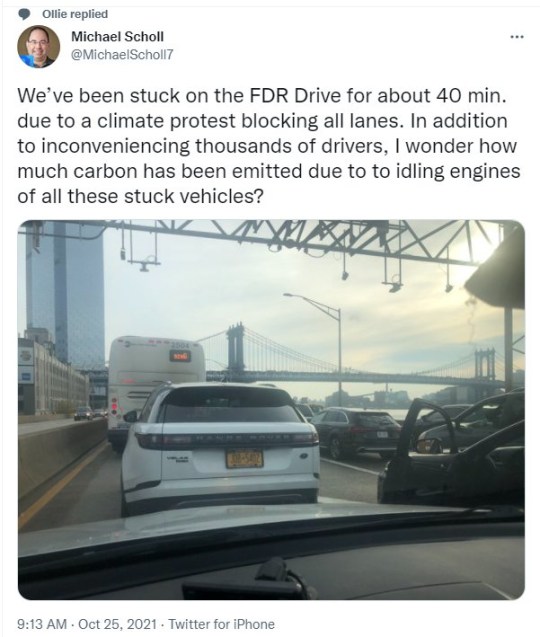 Some New York City commuters were stuck in traffic for 40 minutes because of the protest (Picture: Twitter)

The protestors simultaneously shut down portions of the West Side Highway and FDR Drive on Monday morning shortly before 9a.m, halting traffic on the busy roadways to bring attention to the cause.

The New York City Police Department sent an alert out at around 8.45 am saying that the southbound West Side Highway was blocked at West 34th Street. Meanwhile FDR had all northbound lanes blocked at Houston Street.

The protest on the West side of Manhattan was organized by several groups, including the Sunrise Movement, Extinction Rebellion and Jews for Racial and Economic Justice.

Extraordinary moment on the West Side Highway this morning as climate activists shutdown both sides at 34th Street. Protesters linked arms via metal pipes & sat on the highway while supporters chanted. #ClimateAction pic.twitter.com/4eLB5cUyob

Three members of Jews for Racial and Economic Justice were arrested for blocking traffic on the West Side Highway, the group shared on Twitter.

The West Side Highway had reopened by around 9.55am.

Olivia Jade on Moving on From Admissions Scandal: Quotes