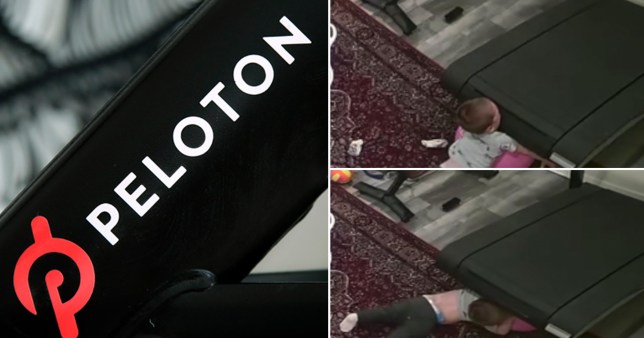 A boy was filmed being dragged under the machine by his arms (Picture: U.S. Consumer Product Safety Commission / YouTube / AP)

Horrifying video showing a little boy being pulled underneath a Peloton treadmill has been released.

It comes as as people have been warned to immediately stop using the exercise equipment if they have children or pets.

The US safety regulator issued the warning about the Peloton Tread after one child died and others were injured.

The US Consumer Product Safety Commission, who released the video, said yesterday that it had received reports of children and a pet being pulled, pinned and trapped under the rear roller of the treadmill.

Video shows how one boy was pulled underneath after he started playing with a pink ball near the machine, which was running.

His arms were pulled underneath, before he manages to escape but is then pulled back in until his whole upper body is beneath the treadmill.

Thankfully, he manages to pull himself free and is able to walk away.

Other children have suffered injuries including fractures and scrapes, while one child died after an accident with the machine.

New York-based Peloton said in a news release that the warning from the regulator not to use the treadmill was ‘inaccurate and misleading’.

It added there was no reason to stop using the treadmill as long as children and pets are kept away from it, it is turned off when not in use and its safety key is removed.

Sales of Peloton equipment have soared during the pandemic as people avoid gyms and work out at home instead.

The company brought in 1 billion dollars (£720 million) in revenue in the last three months of 2020, more than double its revenue from the same period a year before. 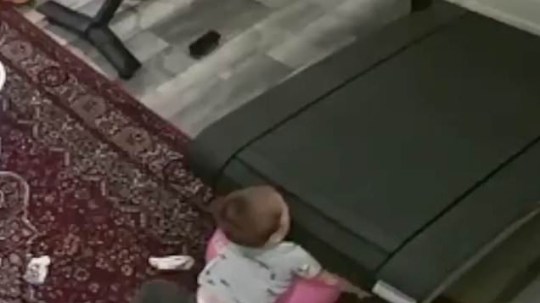 Video shows how a boy became trapped under the machine

Last month, the American firm’s CEO John Foley said in an email to customers: ‘We are aware of only a small handful of incidents involving the Tread+ where children have been hurt.

‘Each one is devastating to all of us at Peloton, and our hearts go out to the families involved.’

He added: ‘We design and build all of our products with safety in mind. But in order to help ensure that you and your family members stay safe with Peloton products in your home, we need your help.

‘This is especially true during what I hope is the final stretch of the pandemic where everyone is still at home.’

Mr Foley advised people to keep children and pets away from Peloton equipment at all times and to double check the area around it is clear before working out.