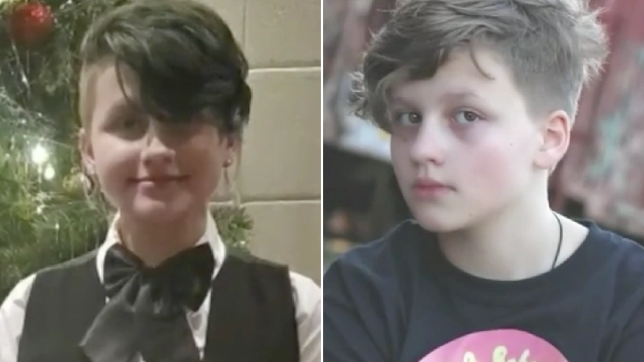 Morgaine Blanchard, 11, says they were attacked in a school bathroom after being picked-on for being non-binary (Pictures: News4Jax)

An 11 year-old child was left with a concussion after being attacked in a school bathroom for being non-binary, they say. Morgaine Blanchard was slapped hard on the back of the head on Monday after an alleged campaign of bigoted abuse at Camden County Middle School in Georgia.

Morgaine, who uses they/them pronouns, said: ‘It was a bathroom break. I just got finished washing my hands. I turned my back to the trash can to put the trash into the trash can, this girl came up and whacked me in the back of the head.’

Morgaine then went to the school nurse for medical assistance. They said: ‘I started to tell her all the symptoms. I started to feel nauseous, dizzy, my vision started getting worse.’ An ambulance was called an hour later, with Morgaine taken to hospital for further treatment for a concussion and swelling.

Morgaine’s mother Rowena Cason is outraged by the treatment her youngster has received, and accused school staff of refusing to use the pronouns Morgaine has asked them to. Rowena told News4Jax: ‘My child identifies as nonbinary. And as a family, we’ve chosen to allow them to express themselves however they’d like.’

Family friend Haley Webb tried to file a police report on Morgaine’s behalf, but was unable to do so. A sheriff’s deputy based at the school claims to be dealing with the attack, although Morgaine’s family do not know if the bully has been disciplined over the slap.

Who was Captain Tom’s wife Pamela?