Crews continue to battle California wildfires that have burned into some groves of gigantic ancient sequoias, the world’s largest tree.

The National Weather Service (NWS) issued a weather watch for critical fire conditions in the Sequoia National Park in the Sierra Nevada, where the Colony fire was burning about a mile from Giant Forest, a grove of 2,000 sequoias.

Firefighters wrapped the base of the General Sherman Tree in fire-resistant aluminum of the type used in wildland firefighter emergency shelters and to protect historic wooden buildings, fire spokeswoman Rebecca Paterson said.

The General Sherman Tree is the largest in the world by volume, at 52,508 cubic ft, according to the National Park Service. It is 275ft high and has a circumference of 103ft at ground level.

The current fires are eating through tinder-dry timber, grass and brush. Historic drought tied to climate change is making wildfires harder to fight. It has killed millions of trees in California alone. Scientists say climate change has made the west much warmer and drier in the past 30 years and will continue to make weather more extreme and wildfires more frequent and destructive. 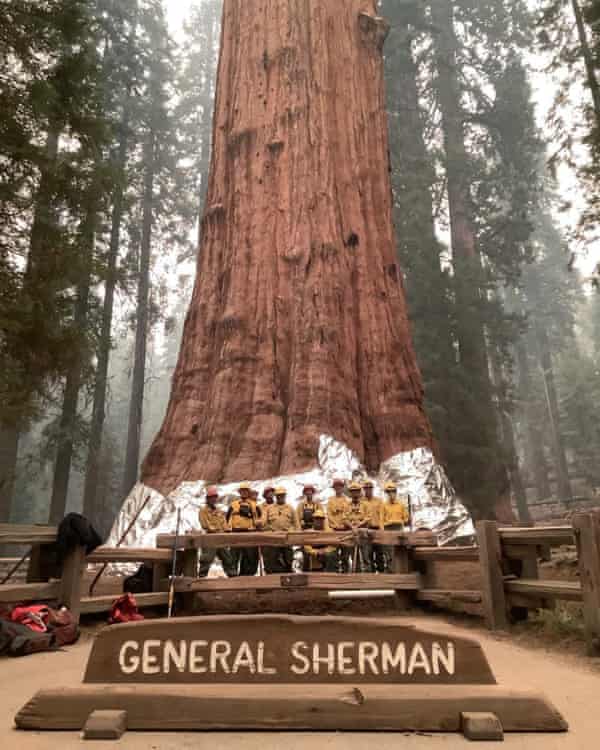 Firefighters pose next to the General Sherman Tree after wrapping it in fire-resistant blanket on 17 September. Photograph: National Park Service HANDOUT/EPA

More than 7,000 wildfires in California this year have damaged or destroyed more than 3,000 homes and other buildings and torched well over 3,000 square miles of land, according to the California Department of Forestry and Fire Protection.

The Colony fire is one of two lightning-caused blazes, known together as the KNP Complex, that have burned about 18 square miles of forest.

The fires forced the evacuation of the park and parts of Three Rivers, a community of about 2,500 people outside the park’s main entrance. Crews have been bulldozing a line between the fire and the community.

Cooler, calmer weather and morning low-hanging smoke that choked off air limited the fire’s growth in recent days but the NWS said a low-pressure system will bring some gusty winds and lower humidity through Sunday in the fire area. However, fire officials weren’t expecting the kinds of explosive wind-driven growth that in recent months turned Sierra Nevada blazes into monsters that devoured hundreds of homes.

“There isn’t a lot of extreme weather predicted for the next few days, which is good news, there’s not a lot of big wind shifts predicted. However, there’s also no rain predicted,” fire information spokeswoman Rebecca Paterson said. “So we’re anticipating that the fires are going to continue to grow. Hopefully they’re not going to grow too fast.”

Giant sequoias are adapted to fire, which can help them thrive by releasing seeds from their cones and creating clearings that allow young sequoias to grow. But the extraordinary intensity of fires – fueled by climate change – can overwhelm the trees. 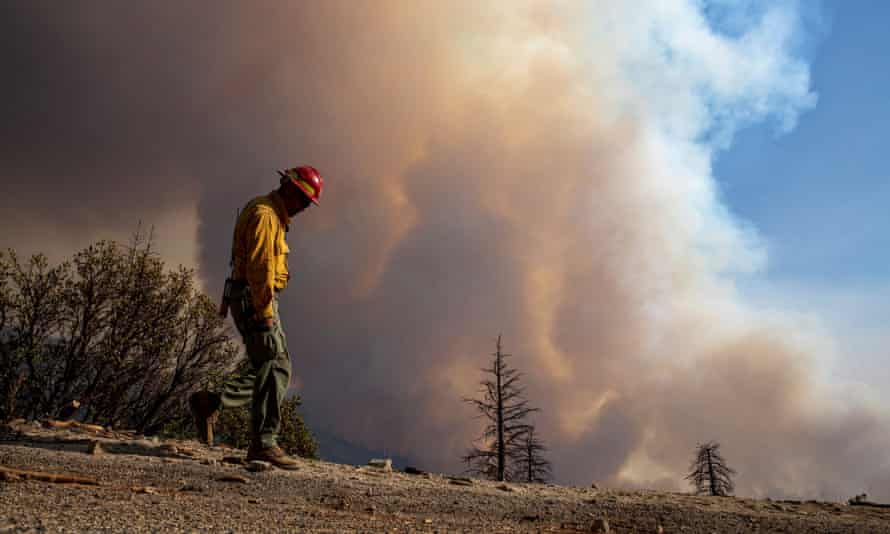 The fires have burned into several groves containing trees as tall as 200ft and 2,000 years old. They include Oriole Lake Grove in the national park and Peyrone North and South groves in the neighboring Sequoia national forest.

The fire had reached Long Meadow Grove in the national forest, where two decades ago Bill Clinton signed a proclamation establishing a national monument.

“These groves are just as impressive and just as ecologically important to the forest,” Tim Borden, who is sequoia restoration and stewardship manager for the Save the Redwoods League, told the Bay Area News Group. “They just aren’t as well known. My heart sinks when I think about it.”

To the south, the Windy fire grew to nearly 11 square miles on the Tule River Indian Reservation and in Giant Sequoia national monument, where it has burned into one grove of sequoias and threatens others.

Fire officials haven’t yet been able to determine how much damage was done to the groves, which are in remote and hard-to-reach areas.

Last year, the Castle fire killed an estimated 7,500 to 10,600 large sequoias, according to the National Park Service. That was an estimated 10% to 14% of all the sequoias in the world.