Temperatures in southern California surged on Sunday, but Huntington state beach was devoid of the umbrellas and beach blankets that would typically line its shore.

Instead, public works officials were working feverishly to stop the spread of an estimated 126,000 gallons of heavy crude oil that leaked from an underwater pipeline over the weekend in one of the largest spills in recent California history.

Officials said the first reports of a spill off the Orange county coast had emerged late Friday and on Saturday morning. By Sunday, booms were deployed on the water to try to contain the oil while divers sought to determine where exactly and why the leak occurred. Beaches were closed as teams raced to find animals harmed by the oil and to keep the spill from harming any more sensitive marshland.

The oil created a miles-wide sheen in the ocean and washed ashore in sticky, black globules. On Sunday afternoon, strong fumes from the oil still carried on the ocean breeze.

The oil will probably continue to wash up on the shore for several days and affect Newport Beach and other nearby communities, officials said.

The area affected by the latest spill is home to threatened and endangered species, including a plump shorebird called the snowy plover, the California least tern and humpback whales. Photograph: Gabrielle Canon/The Guardian

The Huntington Beach mayor, Kim Carr, said the beaches of the community nicknamed “Surf City” could remain closed for weeks or even months.

“In a year that has been filled with incredibly challenging issues this oil spill constitutes one of the most devastating situations that our community has dealt with in decades,” Carr said. “We are doing everything in our power to protect the health and safety of our residents, our visitors and our natural habitats.”

The area affected by the latest spill is home to threatened and endangered species, including a plump shorebird called the snowy plover, the California least tern and humpback whales.

The effects of an oil spill are wide-ranging. Birds that get oil on their feathers can’t fly, can’t clean themselves and can’t monitor their own temperatures, said Miyoko Sakashita, director of the Center for Biological Diversity’s oceans program. Whales, dolphins and other sea creatures can have trouble breathing or die after swimming through oil or breathing in toxic fumes, she said.

There were reports that some birds and fish had been caught in the muck and died. The US coast guard said that by Saturday afternoon there had been just one ruddy duck covered in oil and receiving veterinary care. “Other reports of oiled wildlife are being investigated,” the agency said in a statement. 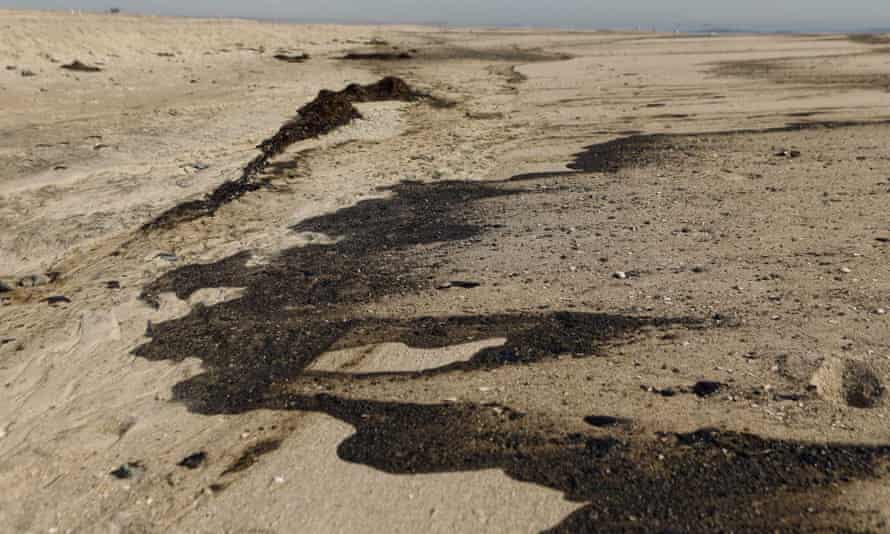 Huntington Beach resident David Rapchun said he’s worried about the impact of the spill on the beaches where he grew up as well as the local economy.

“For the amount of oil these things produce I don’t think it’s worth the risk,” Rapchun said. He questioned whether drilling for oil was a wise idea along some of southern California‘s most scenic beaches. “We need oil, but there’s always a question: do we need it there?” he said.

The spill comes three decades after a major oil leak hit the same stretch of Orange county coast. On 7 February 1990, an oil tanker ran over its anchor off Huntington Beach, spilling nearly 417,000 gallons (1.6m liters) of crude. Fish and about 3,400 birds were killed.

The circumstances of the leak are still being investigated. On Saturday night, a 17.5-mile pipeline located 80 -100ft beneath the surface and three off-shore oil platforms owned by Houston-based Amplify Energy Corp were shot down, the company’s CEO, Martyn Willsher said, and the pipeline was suctioned out so no more oil would spill as the location of the leak was being investigated. 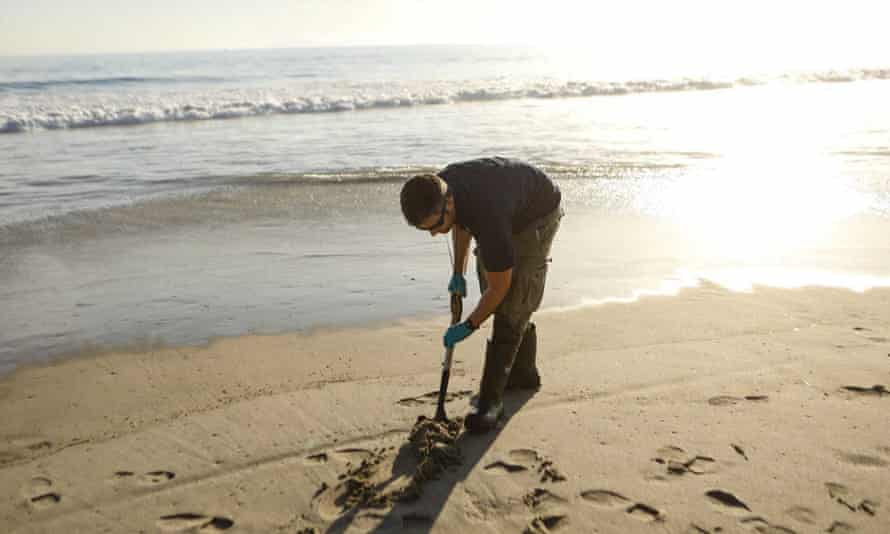 Daniel Orr and Peter Boucher of the California department of fish and wildlife rushed to collect samples from an area spotted with globs of black. Photograph: Gabrielle Canon/The Guardian

At Huntington Beach on Sunday, Daniel Orr and Peter Boucher, two Senior Environmental Scientists with the California Department of Fish and Wildlife, rushed to collect samples from an area spotted with globs of black. The scientists sampled sand and water, and unearthed sand crabs still scuttling underneath the lapping tide.

“Our role is to study the spill and its impacts,” Orr said, adding that it’s still too early to know how much of an ecological toll the spill will take.

Squid Game cast: Where have you seen stars of Netflix drama before?