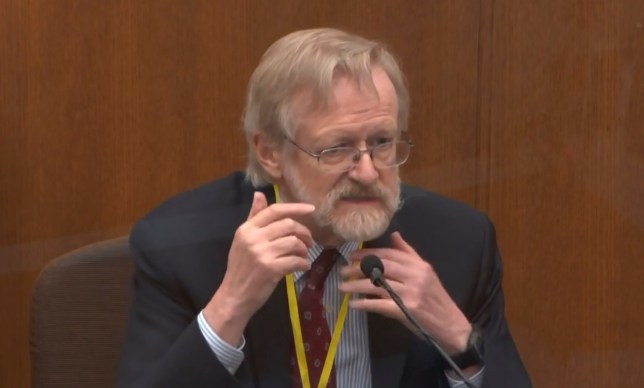 A breathing expert said that George Floyd died from a lack of oxygen as former Minneapolis police Officer Derek Chauvin knelt on his neck.

Dr Martin Tobin, a pulmonologist and critical care physician, told jurors on Thursday that ‘Mr Floyd died from a low level of oxygen, and this caused damage to his brain that we see, and it also caused a PEA arrhythmia because his heart stopped’. PEA stands for pulseless electrical activity, in other words, cardiac arrest.

Tobin said that Chauvin’s knee on Floyd’s neck and the black man’s prone position in handcuffs contributed to his ‘shallow breathing’ that caused him to have a low level of oxygen.

The pulmonologist from the Chicago area added that Chauvin and fellow officer J Alexander Keung pushed Floyd’s handcuffs ‘into his back’ and pushed them high, inhibiting his breathing.

It was as if the left side of Floyd’s chest was ‘being pushed in from the street at the bottom and the way the handcuffs are manipulated… totally interfere with central features of how we breathe’, Tobin said.

Tobin continued that Floyd used his left shoulder to try to create space around his chest in order to breathe, but that ‘the shoulder is a very ineffective way of breathing’.

‘Basically, on the left side of his chest, it’s as if a surgeon almost went in and removed the lung… and left him totally reliant on his right side’, Tobin said.

The world-renowned breathing expert provided a moment-by-moment analysis, with visuals, of the officers arresting Floyd. The cops held Floyd down on the ground against the pavement for nine minutes and 29 seconds on May 25 as he repeatedly cried, ‘I can’t breathe’. Floyd died that day. Tobin said he saw evidence of brain injury in the first five minutes and three seconds of the encounter.

Tobin used video from Floyd’s arrest to detail how Chauvin’s knees on Floyd’s neck and side and restraining his arms stopped his ability to breathe.

‘He’s jammed down against the street, and so the street is playing a major role in preventing him from expanding his chest’, Tobin said.

The pulmonologist also presented two photos of Floyd’s finger and knuckles grabbing onto the street and a police car tire. The motion demonstrated Floyd trying ‘to crank up the right side of his chest’ and ‘this is his only way to try to and get air into the right lung’, Tobin said.

Tobin’s testimony on the ninth day of Chauvin’s murder trial was the first to indicate that Floyd died from the former cop’s knee on his neck, back and side.