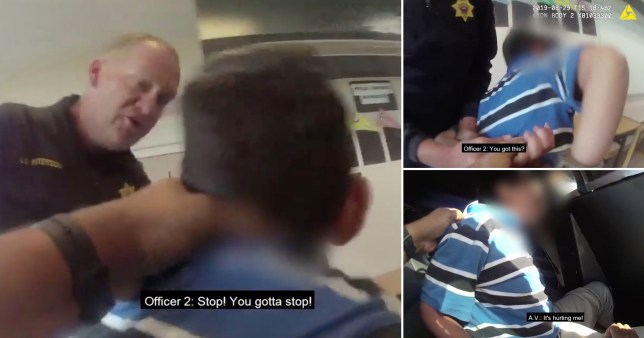 The boy’s mum has filed a lawsuit against the police and school officials (Pictures: Jam Press)

An 11-year-old autistic boy was arrested and then left in a police car while he was hurting himself because he allegedly poked another pupil with a pencil.

Bodycam footage has emerged of cops grabbing the child, pushing him against a desk, ignoring his screams that they were hurting him and putting him in the back of a patrol car.

Sagewood Middle School, in Douglas Country, Colorado, called police with reports that a child had stabbed another pupil with scissors and assaulted a member of staff in August 2019.

In the video, an officer can be heard trying to convince the boy to cooperate with him. Eventually, the cop says: ‘Well, I asked you, now I’m telling you, we’re going to go there.’

The boy, who due to his autism is sensitive to touch, shouts ‘stop, you’re hurting me’ as the officer continues to pull him towards a desk that he is then pressed against and handcuffed.

The cop tells the child: ‘We don’t wanna hurt you. We just want you to walk with us’.

The boy continues to shout ‘ow’ and tells the officers to stop before asking: ‘You don’t even know what the word “stop” means?’ 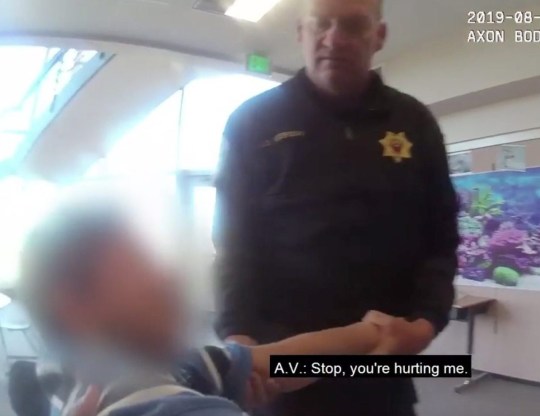 Officers forced the boy up so they could press him against a desk and handcuff him (Picture: Jam Press)

The child, identified only as A.V., starts to scream hysterically and officers tell him he is making the arrest worse and needs to relax.

They also warn that he needs to ‘stop resisting’ and walk with them.

A.V. does not want to get into the back of the patrol car and the police officer says again: ‘I’m not asking you anymore, I’m telling you’.

Eventually, the cops get the boy to sit in the back seat of the vehicle but the video ends with him breathing heavily and screaming.

The child was reportedly left alone in the police car for two hours while he banged his head multiple times on the plexiglass inside, according to a lawsuit recently filed by mum.

He was later held in a youth detention centre on various assault and resisting arrest charges until his parents could post $25,000 (£17,900) in bail money.

The charges were later dropped but his mum has now filed a federal lawsuit, alleging that school officials and the sheriff’s deputies ‘aggressively handcuffed’ and detained her 11-year-old son.

She claims her son poked a classmate with a pencil because he was agitated when they drew on him with a marker, which he would not have liked the touch of.

She said: ‘When we saw him, his forehead and arms were so swollen and bruised. 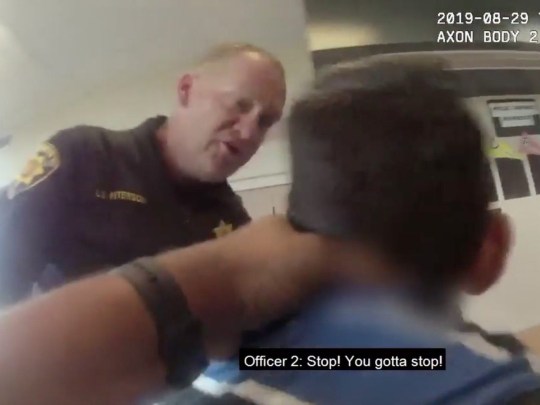 The boy is sensitive to touch and kept screaming that officers were hurting him (Picture: Jam Press) 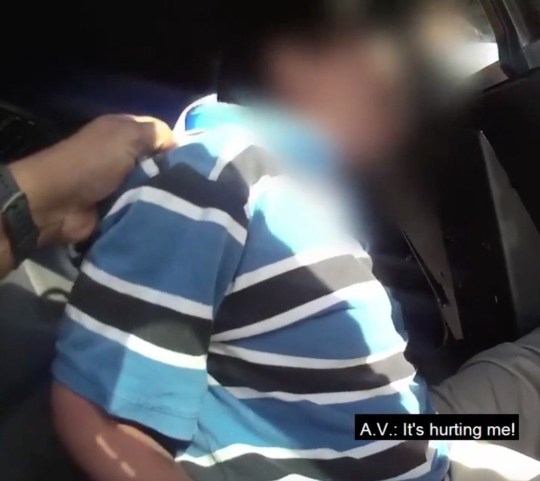 A.V. was allegedly left in the back of the car for two hours while he hurt himself (Picture: Jam Press)

‘After we bailed him out, he wouldn’t eat, wouldn’t speak. A.V. was — is — definitely traumatised. We all are.’

The sheriff’s office said in a statement on Tuesday: ‘When we receive a call for service, especially one that involves a criminal allegation, we must respond.

A spokeswoman from the Douglas County School District said the district couldn’t comment or answer questions about active litigation.

Dino-dressed lockdown customers have accused Sainsbury’s of banning them