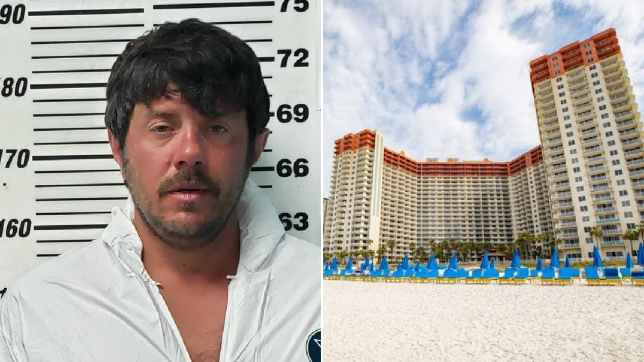 Christopher Lawrence Cox, 37, was arrested and charged with one count of murder and one count of attempted murder after the shooting at Shores of Panama (Picture: Panama City Beach Police Department/The News Herald)

A 14 year-old boy was shot dead and his stepbrother was injured after they refused to give a stranger a cigarette while vacationing on the beach. The boys, both 14, were on a family trip in Panama City Beach, Florida, when Christopher Lawrence Cox, 37, approached them early Tuesday.

After asking for a cigarette, Cox would not leave the boys alone on the beach and allegedly said, ‘You better run for the ocean because I’m going to shoot you,’ a family member told WAVE 3 News. He is said to have followed through with the threat shortly afterwards.

The shooting occurred around 1:30am near the 23-story Shores of Panama resort, according to ABC 3.

A security guard who heard the gunshots rushed to the scene and tackled Cox until police officers arrived, the family member said. Cox was arrested without incident.

The shooting occurred around 1:30am near the 23-story Shores of Panama resort (Picture: WJHG)

Cops found one boy lying on the beach dead from gunshots to his upper body. The other teen was at the complex with wounds in his extremities. The injured teen was taken to a hospital and released after medical treatment.

‘Officers are still investigating the events of what occurred between the three prior to the shooting,’ police said in a press release.

While the shooting happened during spring break, authorities stressed that it was not linked to the occasion.

‘The Police Department would like to emphasize this incident, while occurring during the spring break vacation season, is in no way spring break related,’ the release stated.

The identities of the boys, who were from the Louisville, Kentucky area, were not immediately disclosed.