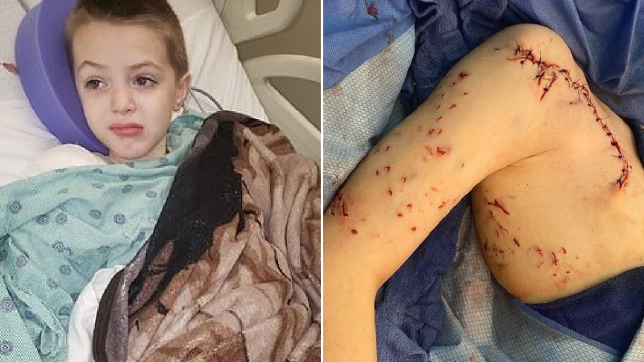 Jay Weiskopf, nine, was bitten by the shark while swimming at Miami Beach on Sunday (Picture: DailyMail.com/Kristine Weiskopf)

A nine-year-old boy managed to survive being attacked by a shark while swimming off Miami Beach just minutes into his family’s holiday. Jay Weiskopf, from Minnesota, had part of his shoulder torn off by what his mother says was a ‘4ft shark’ that attacked him in waist-deep water close to the shore.

The schoolboy has had emergency surgery on his shoulder after being savaged by the shark on Sunday. He’s been left with a huge scar that stretches from his chest to the top of his arm and doctors have warned him he may suffer with long-term mobility problems in his right arm.

Jay was on holiday with his parents Kristine and Ren Weiskopf in Miami, Florida, when he was bitten, and Kristine has described the moment she spotted the predator swimming away after ‘taking a chunk’ out of her son’s shoulder.

‘I was holding his hand the whole time and he was kind of body surfing a little bit and he had fallen on his stomach,’ Kristine told Local 10 news. 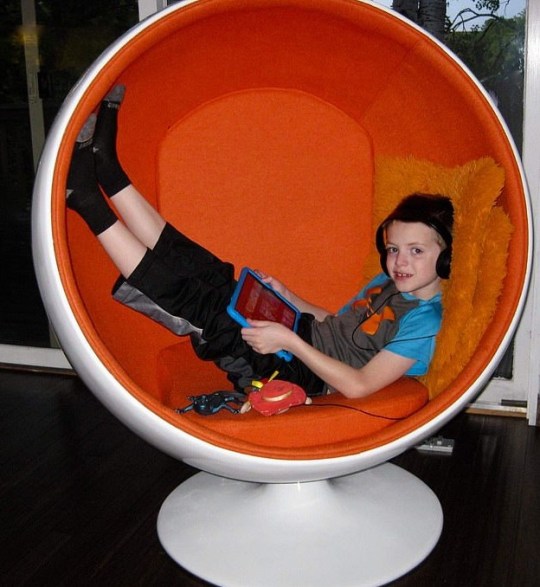 Jay was on vacation in Miami with his parents when he was attacked in the ocean (Picture: DailyMail.com/Kristine Weiskopf) 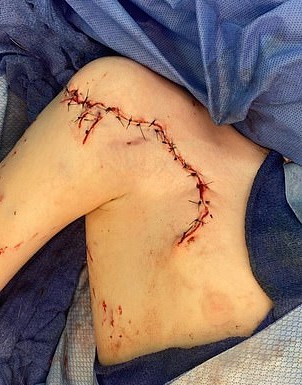 Jay’s wound was closed up with 20 stitches in hospital (Picture: DailyMail.com/Kristine Weiskopf)

She added: ‘When I pulled him up, I noticed there was just a big chunk of skin missing from his shoulder.

‘He just said “ow” and I looked down and there was about a 4ft grey shark just kinda swimming away, so I just scooped him up and ran him up the beach.’

Kristine added that she and her son were only in the water for a few minutes before the shark clamped down on Jay’s upper arm.

Following the attack, Miami Beach Fire Rescue met the family on the sand and rushed Jay to the nearby Jackson Memorial Hospital for treatment. Doctors used 20 stitches to close up his gaping wound and Jay although ‘traumatized’ by his ordeal, is recovering well on a hospital ward.

Speaking to DailyMail.com, Kristine added that she believes the beach where Jay was bitten should be closed to visitors following the attack on her son.

She said: ‘I want to prevent this from happening to another person. 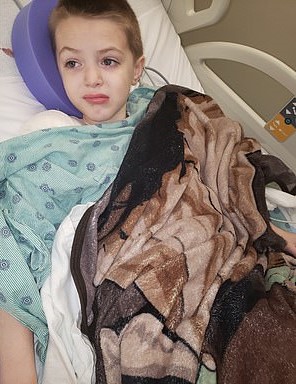 ‘We were in 2 feet of water. It’s just nuts. I never, ever expected this could happen in waist-high water.

‘What I don’t like right now is that the beach is still open, and kids are still down there playing, and they are in the same spot where my son just got attacked. I don’t know if it’s just because of spring break or whatever, but the beach should be closed.

‘He just wants to go home and it’s really sad because we had so much fun planned.’

His father, Ren, added: ‘I just love him so much. He’s such a great kid and we’re still in shock, but thankful.

‘We thank God that he didn’t take his life. That he’s gonna be okay.’ 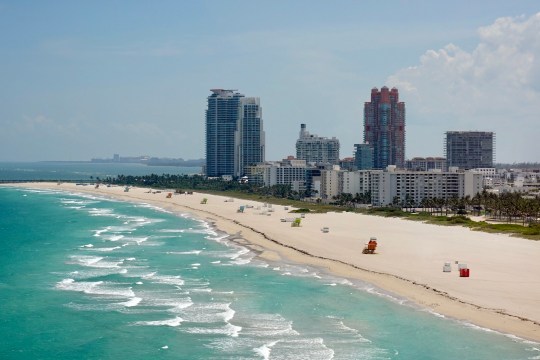 Miami is one of the most popular holiday locations in Florida (Picture: Getty)

In 2020 Florida ended up as the most prolific place in the world for shark attacks, with the US recording 58 per cent of total unprovoked incidents.

The US reported 33 unprovoked shark attacks last year, according to the early World Shark Attack Summary released by The University of Florida’s International Shark Attack File (ISAF) in January.

Of the 33 incident, 16 of the reported attacked are said to have taken place in Florida.