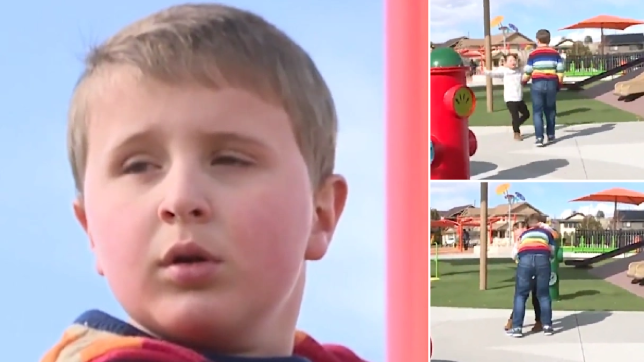 Caleb, 7, struggled to make friends because of his Autism – until he met a kind-hearted girl called Annie at a local park (Pictures: KDVR)

A mother is thrilled after her seven year-old son with autism made his first friend – a kind hearted girl around the same age with Down syndrome. Lindsay Allen was thrilled when her son Caleb came home from a trip to the park about a month ago, and spoke at length about a girl he’d spoken to there called Annie.

Caleb, from Denver in Colorado, proceeded to talk frequently about Annie over the next month, but Lindsay had no way of tracking the youngster or her family down. So she used the Nextdoor App asking locals if anyone knew of a little girl called Annie.

Lindsay also asked them pass on her thanks to the youngster and her family for making such a good impression. Explaining her excitement, Lindsay said: ‘The fact that he not only talked about her the next day, but it continued for week after week was a huge sign to us that he was at the point where he could develop relationships.’

Happily, the messaged reached Annie’s mother Cydney Varno just a day after Lindsay posted it. Cydney said: ‘I was like, “Oh my gosh, my daughter! That’s Annie.”‘ Cydney was touched by Lindsay’s praise for her daughter, and says it helped remind her of the joy a child with special needs can bring.

She told KDVR: ‘She has stretched us as a family just with her diagnosis and some of her delays and health issues. It’s nice just to remember she’s awesome. She loves in a way that I don’t know how to love.’

Caleb and Annie got to enjoy a reunion earlier this week, and hugged like old friends on seeing one another.

Sharing her delight at the embrace, Lindsay said: ‘He’s not a touchy-feely kind of person. That’s not something he would typically do, so for him to approach someone and hug them immediately speaks volumes to what’s actually going on.’

Caleb and Annie are now firm friends, with their families planning to arrange future play dates so they can enjoy one another’s company.