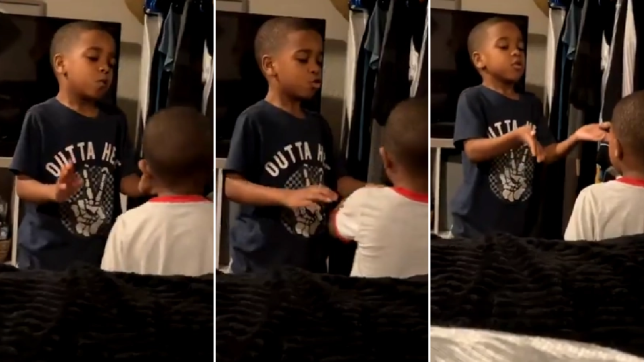 Noah Michelle helped calm four year-old brother Cory down during a tantrum by getting his younger brother to breathe (Picture: Ashley Michelle)

A cool headed six year-old was filmed calming his four year-old brother down during a tantrum by getting his younger sibling to breathe deeply.

Ashley Michelle, from California, filmed the heartwarming encounter between her children, which began with her younger son Cory upset over not being allowed to play Nintendo.

Her older son Noah said: ‘I understand the pain I do but you just have to wait it’s not done yet.’ Ashley then began filming as Noah modeled deep breathing for Cory, while gently holding onto one of the younger sibling’s elbows and saying: ‘Breathe.’

Clearly intrigued by Noah’s calm demeanor, Cory tried deep breathing himself – and instantly stopped crying. Noah said ‘See,’ and took the little boy away to play after the impressive meditation.

My four year old was about to have a whole tantrum and my 6 year old helped him manage his breathing so he could calm down…. Iâd say Iâm doing freaking alright pic.twitter.com/wkGYPn0H4a

Ashley was deeply moved by the interaction, and bond between her sons. She wrote: ‘My four year old was about to have a whole tantrum and my 6 year old helped him manage his breathing so he could calm down…. I’d say I’m doing freaking alright.

‘Some of you asked why he was crying, he wanted to play the Nintendo — if you have kids or have been around any you know they think it’s fully charged after being plugged for only a millisecond… anyway it wasn’t and he started having a little meltdown til big bro intervened.’ 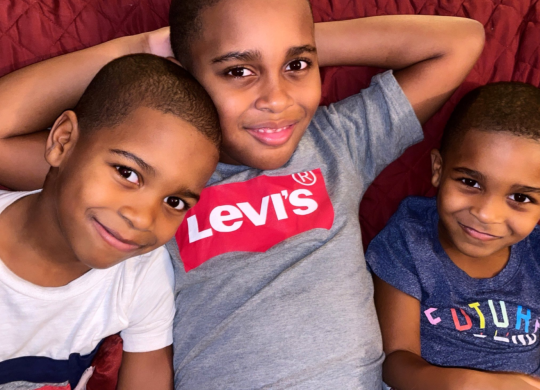 Ashley’s family was widely praised on Twitter, with Captain America star Chris Evans among those retweeting the interaction.

She later shared a photo of her three children smiling, and said middle son Noah was ‘definitely the sweetest of the bunch.’

The Falcon and the Winter Soldier: Where have we seen the cast before?