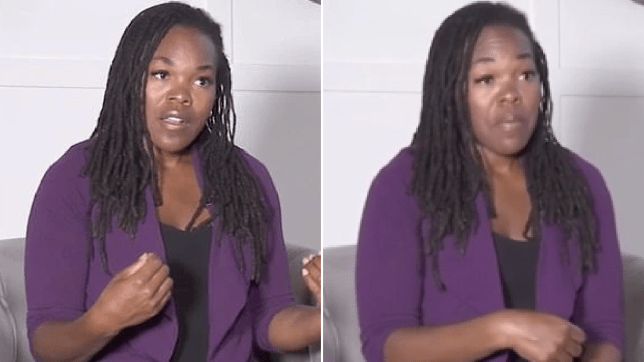 Businesswoman Aundrea DeMille fears she suffered racism after being made to strip down to her breasts by airport security (Pictures: ABC4)

A black businesswoman fears she was the victim of racism after being made to strip down to her breasts at an airport. Aundrea DeMille, 37, says she was made to take her sports bra off at Phoenix Sky Harbor Airport in Arizona on February 28 – and that she was the only person subjected to the degrading ordeal.

Aundrea says she was ordered to remove the bra while passing through a full body scanner as she headed home to Utah from a spiritual retreat. The incident happened even though Aundrea was wearing thin yoga gear that makes it impossible for the wearer to conceal anything underneath

Aundrea, who is a real estate worker, recalled: ‘I was in yoga pants and a jogger zip-up jacket and nothing but a sports bra underneath. I get ready to go through the scanner where we stand to put our hands up, and there is a middle-aged white gentleman on the other end and he says are you wearing something underneath that?

‘And, I said “What?” And he goes “Are you wearing something underneath that?” So, I zip halfway so he could see I’m in nothing but a sports bra, and he says you have to take that off.’

Aundrea, who lives in Ogden, Utah, continued: ‘I’m standing there in nothing, but tights like half-naked. I put my hands up and follow suit, and I look around and no one else is stripping down. At this point, I’m shaking I can’t even look him in the eye.’

The traveler says the experience left her feeling ‘degraded and humiliated,’ and now worries she was targeted for the extreme security check because of her race.

Transport Security Administration officials have yet to comment on Aundrea’s claims, but say they hope to be able to share surveillance tape of the encounter in the coming days.

Justin Bieber Admits He ‘Overlooked’ Women’s Struggles in the Past