Newly released bodycam footage shows a black man being tasered, beaten and dragged by his feet during a violent arrest that ended in his death.

Ronald Greene, 49, died in an ambulance after suffering a cardiac arrest while being handcuffed by Louisiana State Police officers, in May 2019, in a confrontation that has been described as ‘murder’ by his family. Ronald’s loved ones have filed a federal wrongful-death lawsuit following his passing, alleging troopers ‘brutalized’ him, caused his body to go into cardiac arrest and then tried to cover up the cause of death.

In an initial account of the arrest, officers reported that Ronald ‘died on impact’ after crashing into a tree – remarks that were questioned by doctors who tried to save Ronald’s life and were later retracted completely by police in a statement.

Bodycam footage of the arrest, released on Wednesday, shows how Ronald was punched in the face, tasered, kicked and even dragged by his feet while shackled by his ankles by officers in Monroe County, Louisiana. 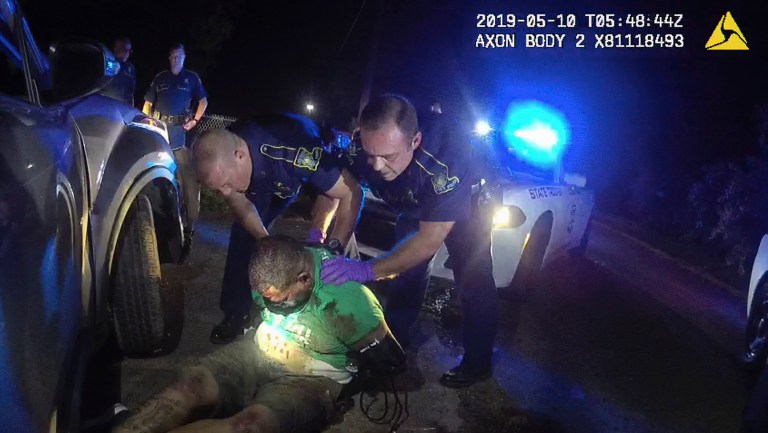 Barber, Ronald, had led police on a 115mph chase before his vehicle was brought to a stop. The clip shows him appearing to surrender to police, raise his hands in the air and say ‘OK, OK, I’m sorry’.

He also can he heard saying ‘I’m your brother, I’m scared, I’m scared’, as troopers Chris Hollingsworth and DeKota DeMoss approach Ronald to detain him.

In the video Hollingsworth shocks Ronald with a stun gun, wrestles him out of the SUV and then appears to place him in a chokehold and punch him in the face while another trooper can be heard calling him a ‘stupid mother***r’.

Hollingsworth hits Ronald several times and appears to put pressure on one of his arms before he is finally placed in handcuffs.

The troopers then leave the bloodied and bruised man face down and moaning on the floor for more than nine minutes, as they use cleaning wipes to wash blood off their hands and faces.

‘I hope this guy ain´t got f***ing AIDS’, one of the troopers can be heard saying.

At one point, another trooper, Kory York, pulls Ronald’s leg shackles and briefly drags the man, face down on his stomach across the dirt.

York can also be seen kicking Ronald as he attempted to roll from his stomach onto his side.

At least six officers were on the scene of the arrest but not all of them had their body cameras switched on. 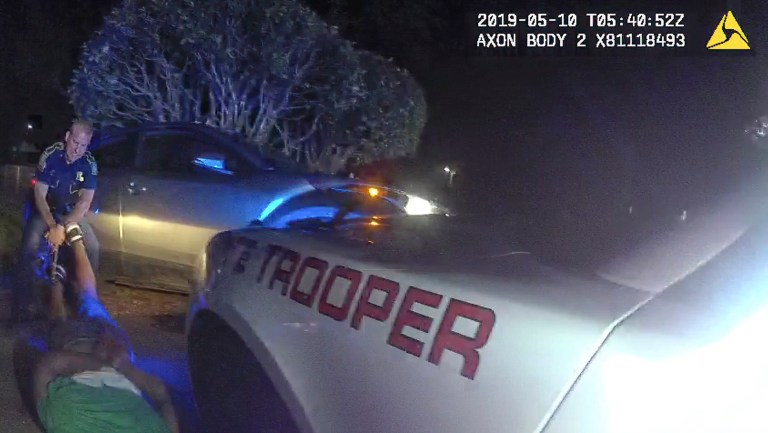 Kory York grabbed Ronald’s legs and dragged him on his stomach (Picture: AP) 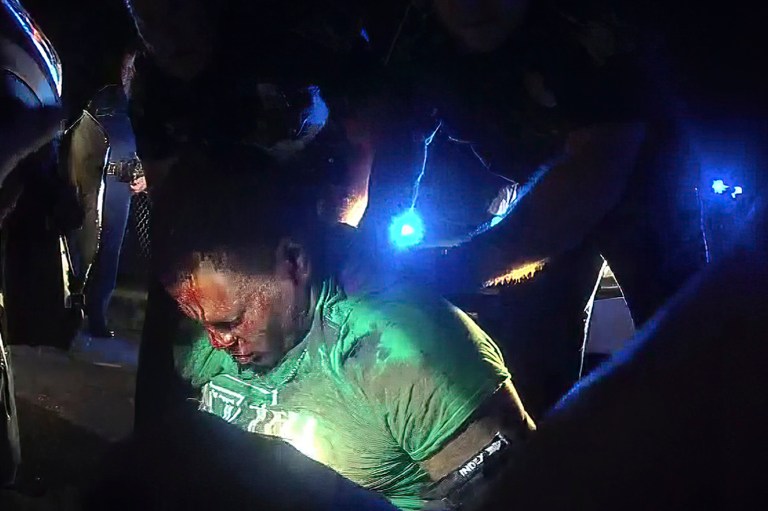 Ronald died of cardiac arrest and was pronounced dead on arrival to hospital (Picture: AP)

Ronald became unresponsive following the heavy-handed confrontation and was taken to hospital by ambulance, with his arm cuffed to the bed rail.

As part of their lawsuit Ronald’s family has released graphic photographs of his body on a hospital trolley, showing his face covered in bruises and cuts.

Troopers initially reported that Ronald died on impact after crashing into a tree during the chase. In a statement Police did eventually acknowledge that Ronald was involved in a struggle with troopers and died on his way to the hospital.

Union Parish coroner Renee Smith told last year Ronald’s death was ruled accidental and attributed to cardiac arrest while a federal and state investigation into his passing continues. A spokesman for Louisiana State Police has refused to comment because of the ongoing probe, reports dailymail.co.uk.

Coroner Smith added that her office´s file on Ronald attributed his death to the car and made no mention of a struggle with state police.

It wasn’t until Associated Press obtained a medical report in which an ER doctor stated that Ronald arrived dead at the hospital, bloodied with stun-gun prongs in his back.

The doctor wrote that the claim made by police that Ronald died on impact after crashing into a tree ‘does not add up’.

Speaking on Wednesday Ronald’s mother, Mona Hardin, said: ”They murdered him. It was set out, it was planned. 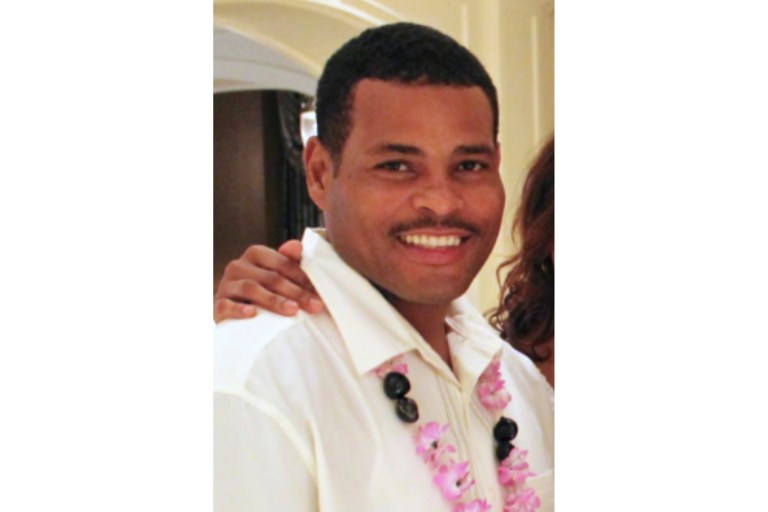 Ronald Greene died in police custody in May 2019 (Picture: AP)

An attorney for Ronald’s family, Lee Merritt, described the footage as having ‘some of the same hallmarks of the George Floyd video, the length of it, the sheer brutality of it’.

‘He apologized in an attempt to surrender’, Merritt said.

He said: ‘Police departments have got to stop putting roadblocks up to information that is, in the public´s eye, questionable. They have to reveal all that they know, when they know it.

‘It suggests that you´re hiding something.’

While acknowledging that Ronald ‘was not without fault’ and appeared to resist the troopers´ orders, Scott said the footage of trooper Kory York dragging the handcuffed man face-down by his ankles was ‘malicious, sadistic, completely unnecessary.’

‘That should never have never happened’, he said.

‘You´ve got the guy completely compromised. He´s not hurting anybody.’

One of the officers involved in the arrest, Hollingsworth, died in a single-vehicle crash that happened hours after he learned he would be fired for his role in the Ronald’s arrest. 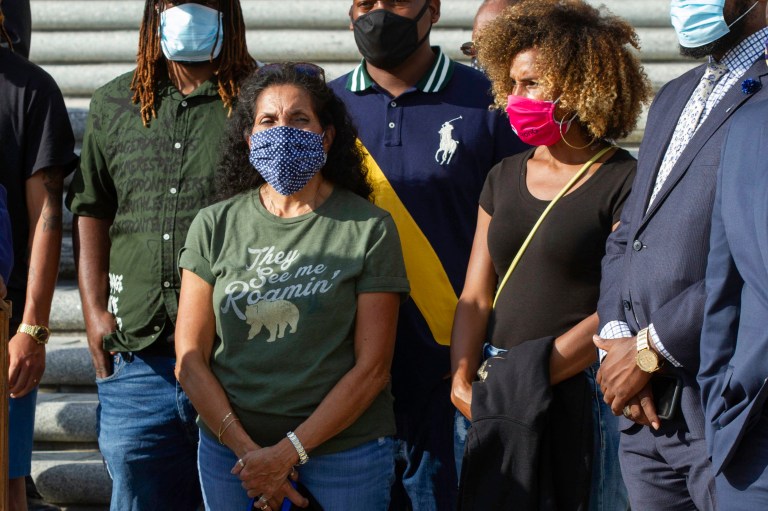 Mona Hardin, center, mother of Ronald Greene, spoke at a press conference on Wednesday, May 19, as the family launched a federal lawsuit against police involved in Ronald’s death (Picture: AP)

York, meanwhile, was suspended without pay for 50 hours for the dragging and for improperly deactivating his body camera.

A third officer, DeMoss, was arrested in connection with a separate police pursuit in 2020 in which he and two other officers allegedly used excessive force while handcuffing a driver.

State Police bosses initially argued the troopers´ use of force against Ronald was justified, saying it was ‘awful but lawful’. The department did eventually open an administrative investigation into Ronald’s death but not until 474 days after the incident.

Inside Eataly, the new East London Italian food emporium you need to visit 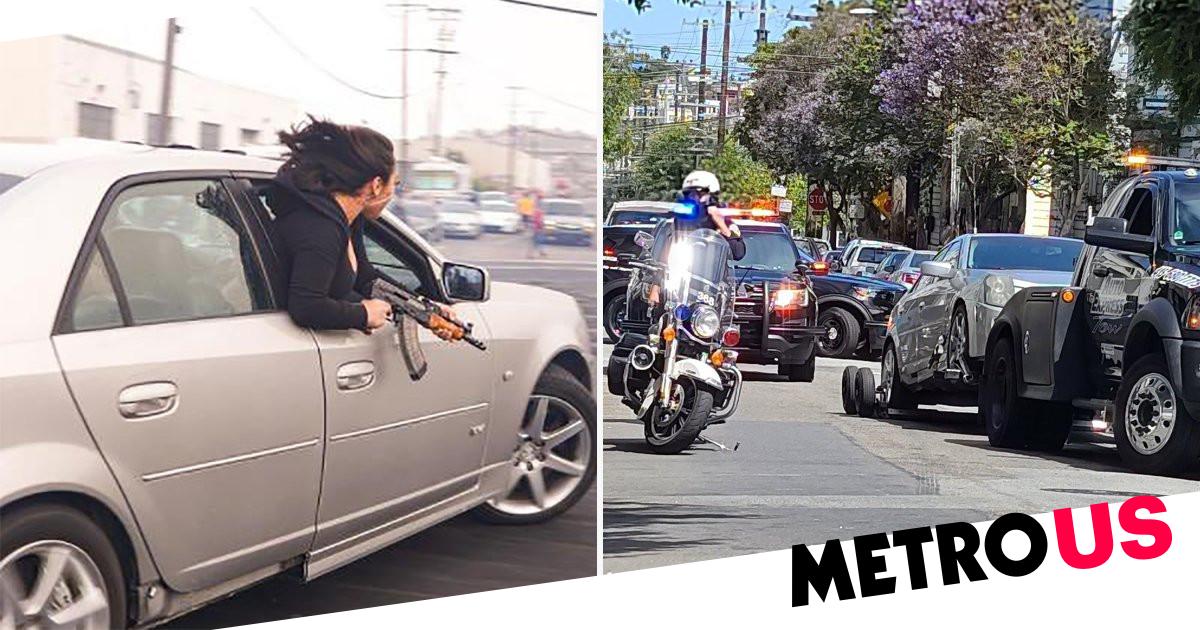 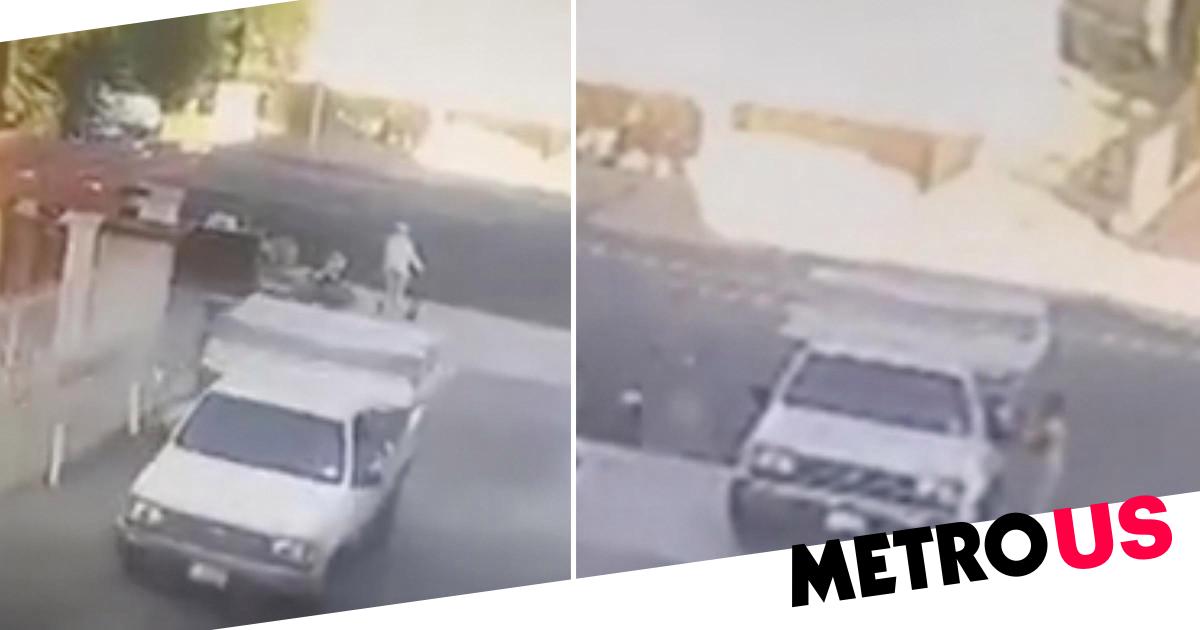 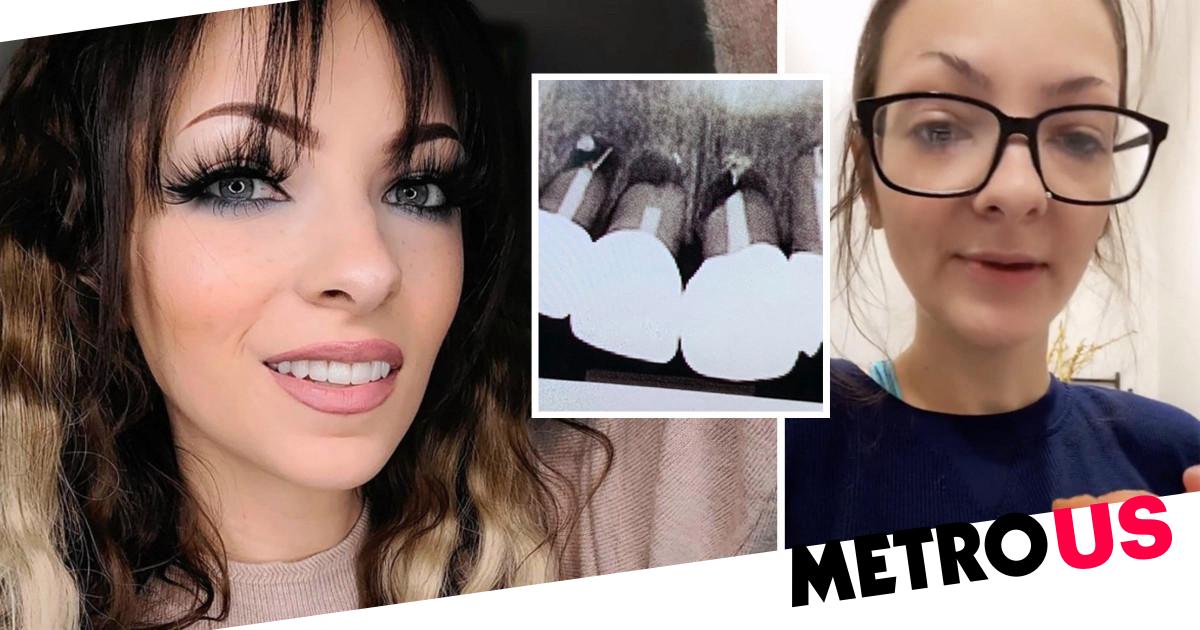 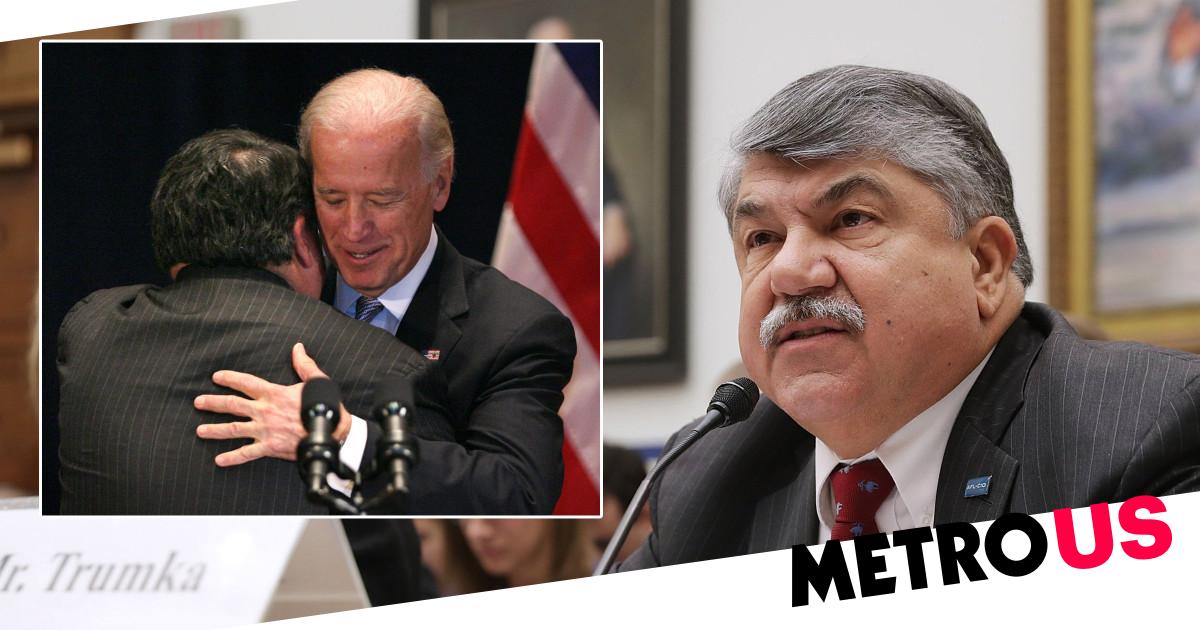 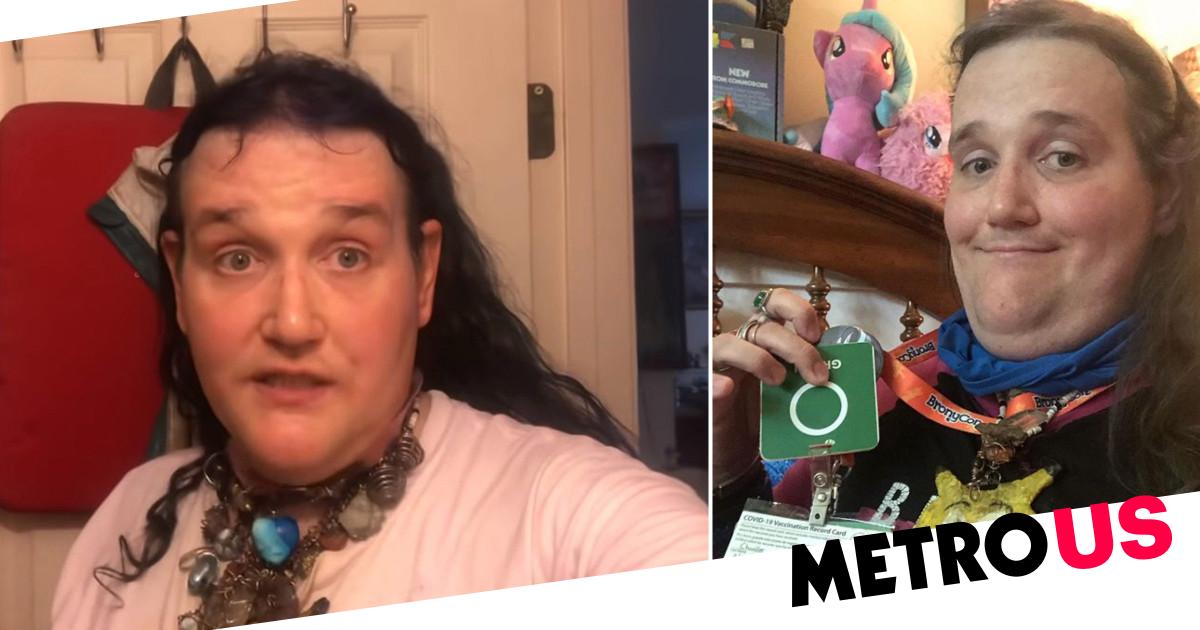