Bodycam footage shows a senior police officer shooting a 20-year-old black man dead after apparently pulling for her gun instead of her Taser by mistake.

The killing of Daunte Wright during a traffic stop has sparked two nights of civil unrest in Brooklyn Center, Minnesota, despite a city-wide curfew.

Yesterday police chief Tim Gannon described the shooting on Sunday as ‘an accidental discharge’, but not all protesters are convinced and the incident is now under investigation.

Video footage shows Mr Wright and his girlfriend being pulled over for what police said was an expired vehicle registration.

One of the officers tries to handcuff the driver next to the car before he breaks free and gets back inside the vehicle.

She then fires a single shot from her handgun instead, and can be heard shouting: ‘Holy s**t, I just shot him.’ 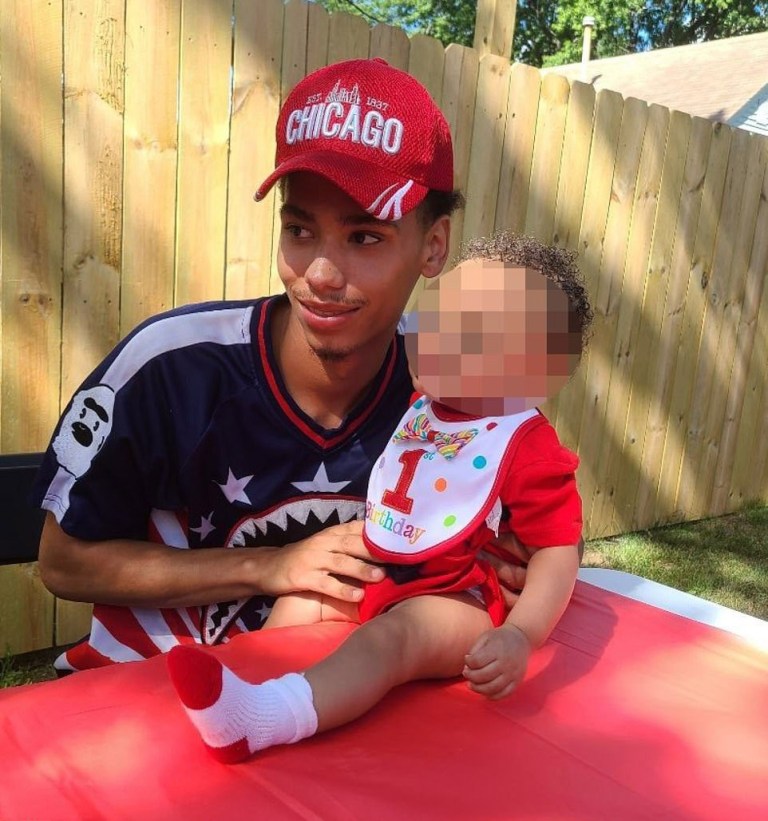 Daunte Wright, 20, was pulled over for what police say was an expired vehicle registration 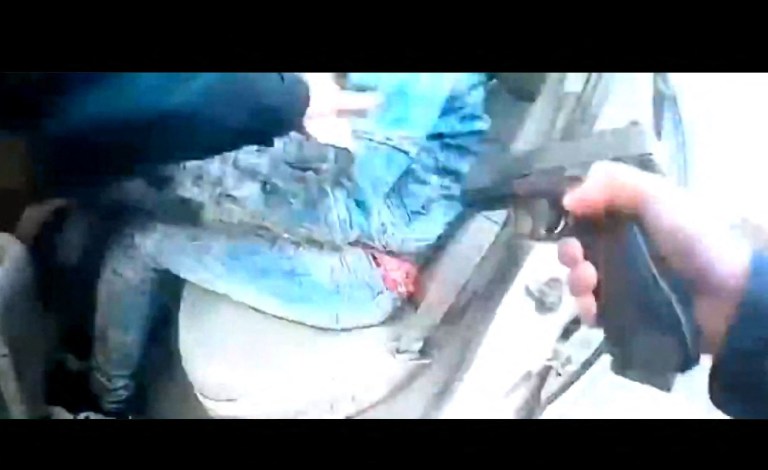 Dashcam footage shows an officer pulling for a handgun instead of a Taser (Picture: AFP/Getty Images) 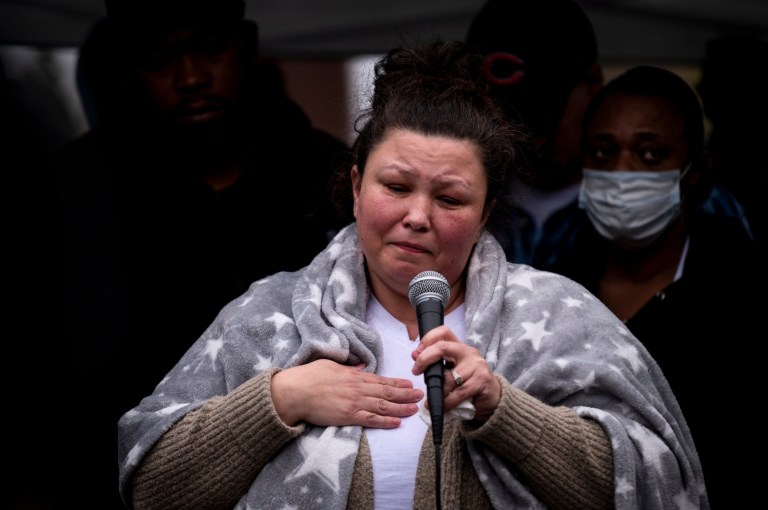 At a vigil yesterday, Katie Wright said her heart is ‘broken in a thousand pieces’ (Picture: Reuters) 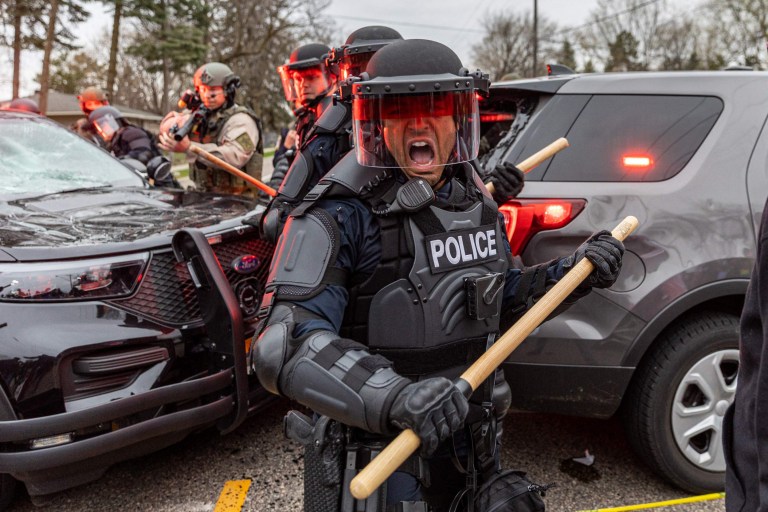 The car then rolls away with Mr Wright still in the driver’s seat. It ended up passing several blocks before striking another vehicle.

An autopsy revealed that the motorist was killed by a gunshot wound to the chest.

During a memorial vigil yesterday evening at the spot where Mr Wright was killed, relatives remembered him as a good-natured father who worked multiple jobs to support his 2-year-old son.

Rejecting the notion that a mere accident was to blame, his older half-sibling Dallas Wright told the crowd: ‘My brother lost his life because they were trigger happy.’

His mother Katie Wright added: ‘My heart is broken in a thousand pieces… I miss him so much, and it’s only been a day. 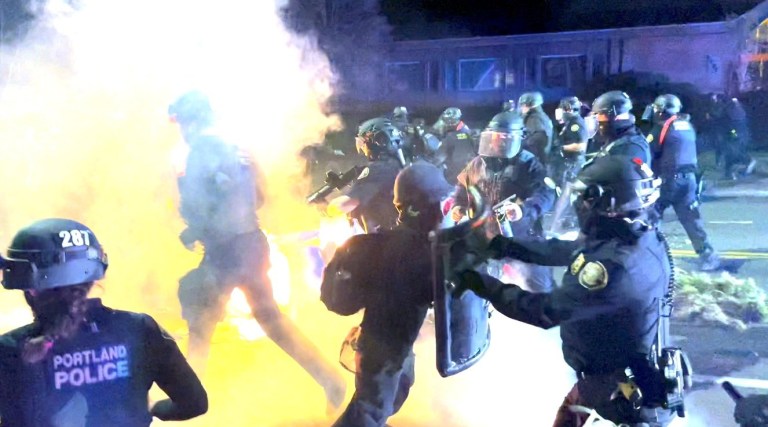 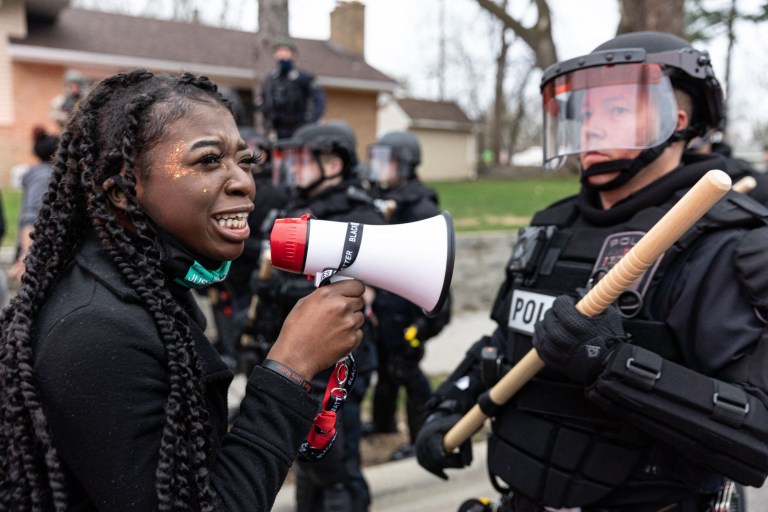 Not all protesters agreed that a mere accident was to blame for Mr Wright’s death (Picture: AFP/Getty Images) 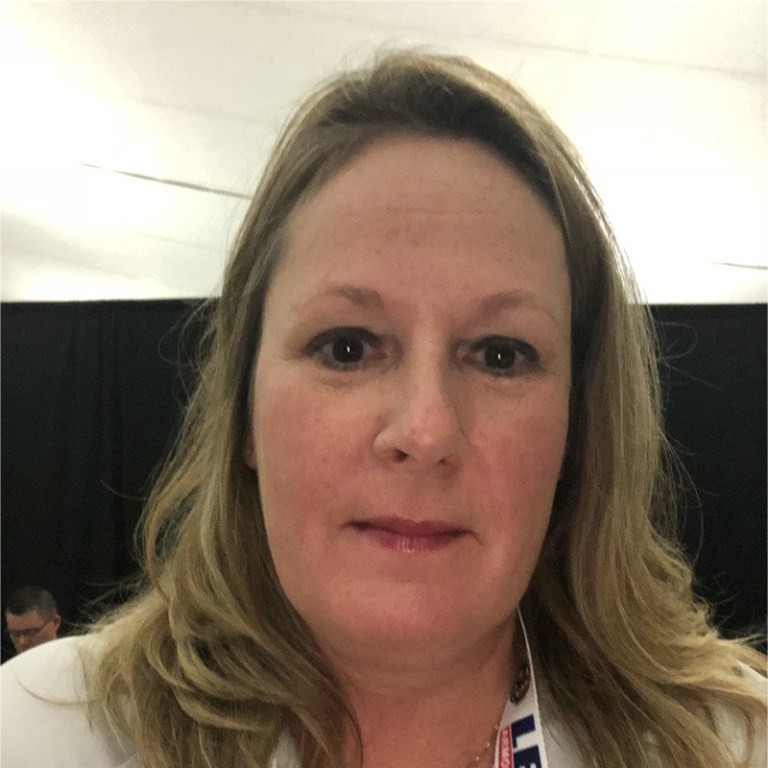 The officer who fired the shot was later identified as Kimberly Potter, a 26-year department veteran (Picture: LinkedIn) 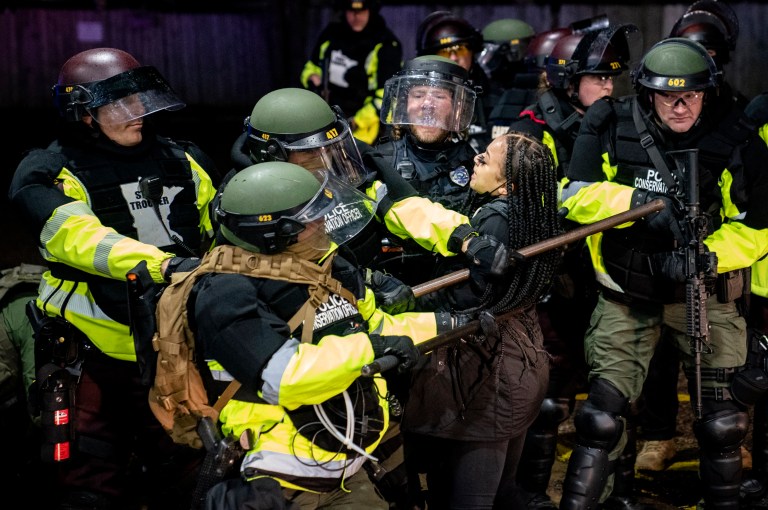 A demonstrator is arrested by police for violating curfew and an order to disperse (Picture: AP)

‘He was my life, he was my son and I can never get that back. Because of a mistake? Because of an accident?’

Mr Wright’s father, Aubrey, told the Washington Post his son had dropped out of high school a few years earlier due to a learning disability.

The shooting roiled a region already on edge following the killing of 46-year-old George Floyd, who died in May 2020 with his neck pinned to the street under a white Minneapolis police officer’s knee.

Mr Wright was killed just 10 miles from where Mr Floyd lost his life in an arrest for allegedly passing a bogus $20 bill.

Sunday’s shooting immediately sparked a night of skirmishes between police and protesters in Brooklyn Center. 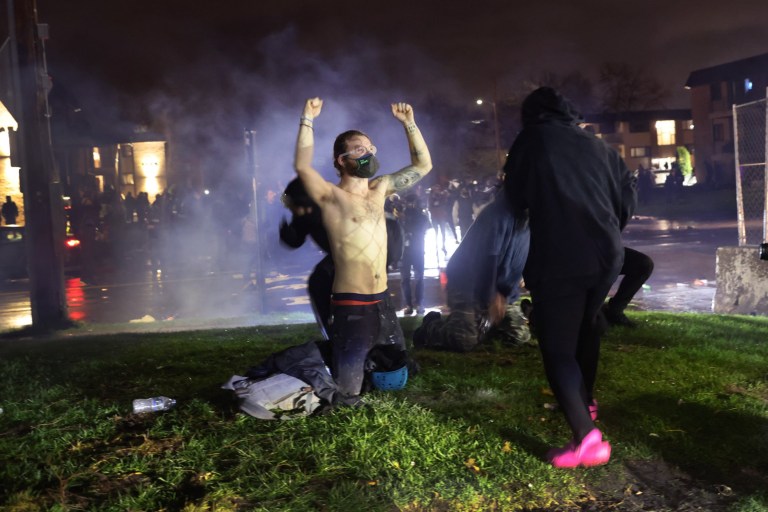 Protesters have taken to the streets, chanting ‘No justice, no peace’ (Picture: Getty Images) 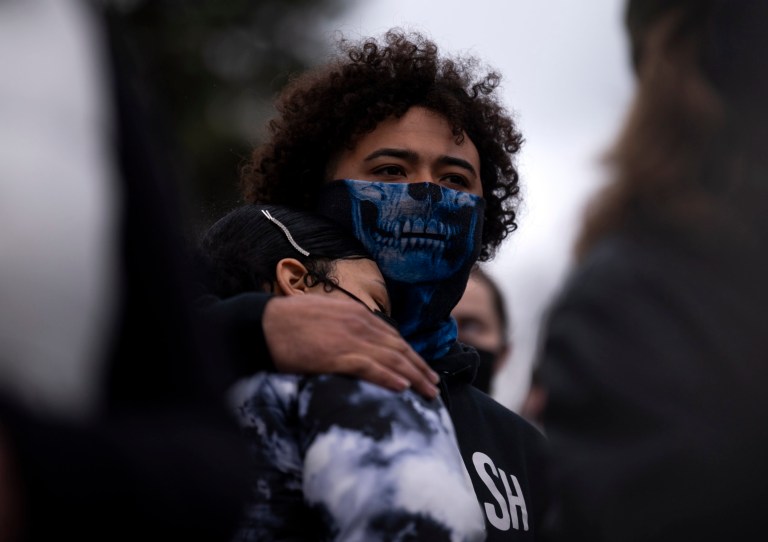 An emotional crowd stood in the rain to hear Katie Wright speak about her son (Picture: Getty Images) 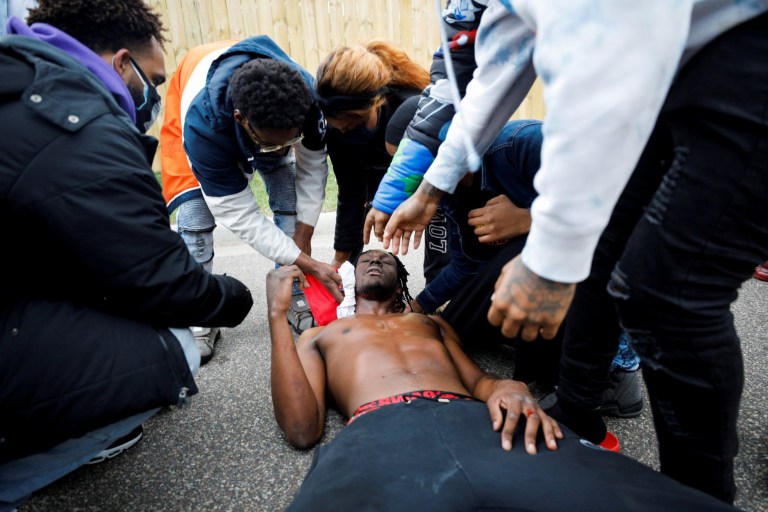 A man receives medical attention after getting shot in the head with a rubber bullet (Picture: Reuters) 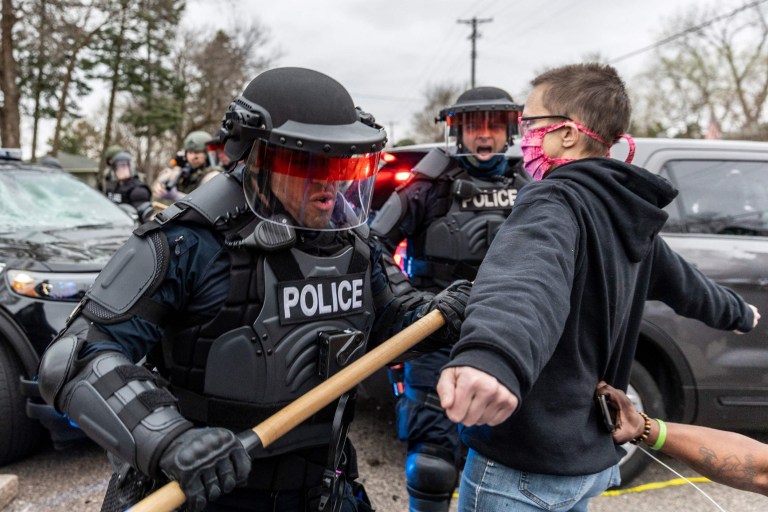 Local media reported looting and burglaries of about 20 businesses at a nearby shopping centre.

Unrest flared up again yesterday as hundreds of protesters marched through the rain, defying a curfew ordered by Governor Tim Walz, and clashed with officers outside Brooklyn Center’s police headquarters.

Demonstrators carried signs saying ‘Jail all racist killer cops,’ ‘Am I next?’ and ‘No justice, no peace’.

Some hurled bottles and other projectiles as police responded by firing volleys of tear gas and what appeared to be non-lethal plastic rounds.

Some demonstrators picked up smoke canisters and threw them back toward police, while others shot fireworks in their direction.

A nearby discount store was looted and vandalised, but the bulk of the demonstrators appeared to have drifted away by 10pm.