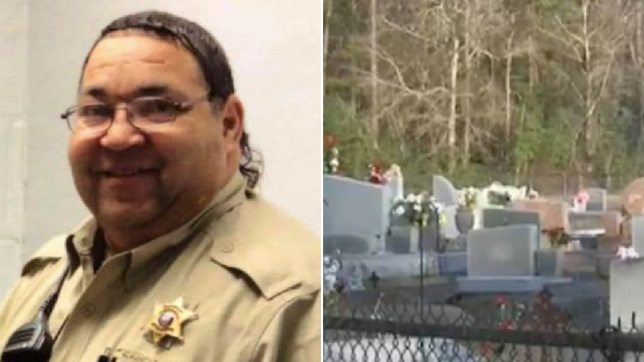 Darrell Semien’s family were told they couldn’t bury him at Oaklin Springs Cemetery in Oberlin, Louisiana, because it had a ‘whites-only’ rule (Picture: KLFY)

A grieving black family have told of their outrage at being banned from burying their father at a ‘whites only’ cemetery. Darrell Semien’s wife Karla was stunned when a saleswoman at the Oaklin Springs Cemetery in Oberlin, Louisiana, told her that colon cancer victim Darrell, 55, could not be buried there because of his race.

Recalling the incident that happened earlier this week Karla said: ‘First me and one of my other sons got out of the car when she drove up, and he’s white, and she said she was sorry for our loss, and I told her, “Thank you.”

‘And before I could say anything else, the rest of them started coming out of the car, and she looked at them and then she looked at me and says, “We’re going to have to have discrepancy.” She said, “We’re not going to be able to sell you a plot.”’

The Semiens later discovered that the cemetery had a set of rules drawn-up during the 1950s which said it could only be used to bury the ‘remains of white human beings.’

They were particularly outraged that Darrell – a former police officer and foster dad who was a well-liked pillar of his community – could suffer such discrimination even after his January 24 death.

Afterwards, Karla shared what had happened on Facebook, sparking an emergency meeting of cemetery board members, who immediately axed the racist rule, as well as the worker who told the Semiens about it.

Cemetery board president Craig Vizena told KLFY: ‘I know it was wrong and now it’s right.

‘I apologized, and I’m still apologizing to those people. I am so sorry that this happened.’

Vizena has called for other locals to check cemetery rules for similar language, and challenge any discrimination that they find.

Darrell’s wife, children and grandchildren fear other grieving families may have capitulated to the racist rules without challenging them.

Despite the apology and change in rules, the Semiens say they no longer feel comfortable burying Darrell there.

They have instead opted to lay him to rest at Oberlin’s Sonnier Cemetery on January 30.

The late cop’s daughter Kimberly says the first question she now asks cemetery bosses when calling them up is ‘Are black people allowed to be buried in your cemetery?’

She added: ‘His main duty was protect and serve.

‘He didn’t but his badge on and say, “I’m only going to protect the blacks because they’re blacks. I’m just leaving white people out of it.” No. He protected and served everybody no matter what the color is.’

‘That’s the only thing that’s going to stick in their heads for the rest of their life and mine too.’