Black farmers throughout the south call Cornelius Blanding daily to ask when the money might come from the US Department of Agriculture. Updates aren’t coming any other way.

Blanding and his staff at the Federation of Southern Cooperatives do their best to stay on top of a federal debt relief program that should have started to pay farmers in June. They field calls and answer questions with limited information from the USDA, knowing only that a small percentage of Black farmers, and an even smaller percentage of the cooperatives’ membership, are eligible.

Cornelius Blanding, executive director of the Federation of Southern Cooperatives, based in Georgia. Photograph: The James Beard Foundation

The $4bn in debt relief has been referred to as a reparations package to correct longstanding USDA discrimination against Black farmers, but the rollout of payments has been held up by lawsuits filed by white farmers who are left out of this loan forgiveness program. Designed to support all farmers of color, in reality more Native American than Black farmers could benefit from the program.

“This isn’t a Black farmer issue, it’s a farmers of color issue. It has been wrongfully framed as Black versus white,” said Blanding, executive director of the federation.

Of the 20,200 farmers eligible for the program, nearly half, about 9,950, are Native American. According to the latest census of agriculture, in 2017, 79,198 producers identified as American Indian or Alaska Native, compared with 48,697 who identified as Black, accounting for 2.3% and 1.4%, respectively, of the country’s 3.4 million producers.

While leaders in the Native American farming community think those numbers are accurate, many Black leaders say they’re too high. Lloyd Wright, former director of civil rights at the USDA, estimates there are closer to 38,000 Black farmers.

Many Black farmers stopped trying to get money from the USDA at least a generation ago due to the rampant discrimination they faced, which has led to the loss of 90% of Black farmland over the last century. Today, far less than 10% of the country’s Black farmers – by either Wright’s or the USDA’s estimate – or just 3,337 Black farmers are eligible for this debt forgiveness, according to the Washington DC Farm Service Agency (FSA), the USDA’s lending arm.

“If you don’t have loans,” Wright said, “you can’t have debt relief.” 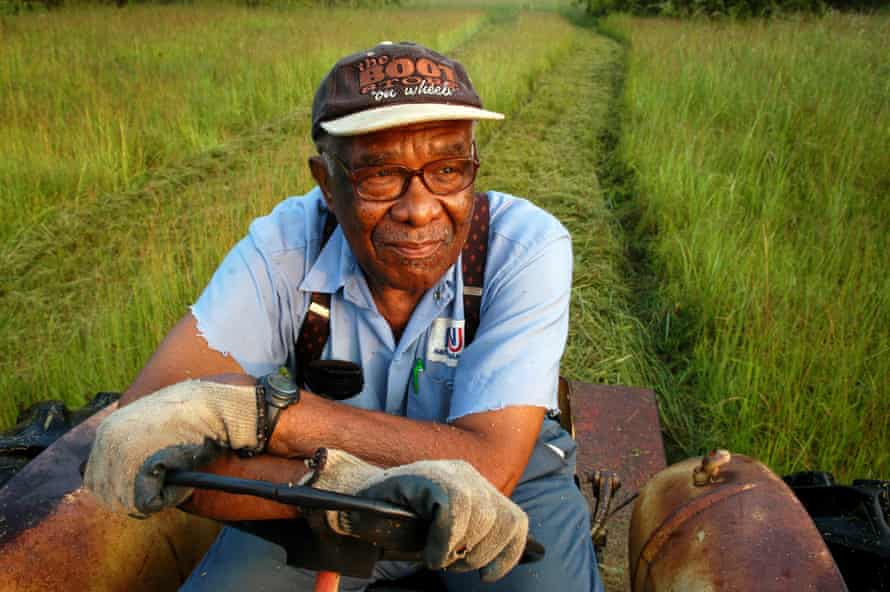 Eddie Cotton, 82, Hermanville, Mississippi, clears a field for a fall crop of hay, using a 40-year-old tractor. He is among thousands of Black farmers denied federal loans in past years. ‘They took away my ability to provide for my family,’ he says.
Photograph: Robin Nelson/Zuma Press Inc

In March, $5bn was allocated for the Emergency Relief for Farmers of Color Act: $4bn for debt forgiveness on USDA loans and $1bn for outreach, programming and financial support for research and education at historically Black colleges and universities (HBCUs) and land grant universities.

Colby Duren, director of policy for the Intertribal Agriculture Council (IAC), said when the USDA was created in 1862, it was built on the idea of homesteading and land successions and takings from tribal communities. “A lot of tribal producers as well as African American producers weren’t seen as original stakeholders in the department. We have to now take advantage of these programs that were never envisioned for tribal people to be part of.”

The IAC is a non-profit that advocates for the preservation of Indigenous land and the wellbeing of its producers. “We look at this as the debt relief that was provided by Congress to support socially disadvantaged producers, many of whom did not have access to a lot of the rounds of relief that other producers received,” said Duren. White farmers received 97% of the $9.2bn in last year’s Covid federal farm bailouts. “We want to make sure tribal and all Bipoc voices are involved in this to get the aid they need.”

The IAC has been in discussion with other organizations that represent farmers of color, including Blanding’s.

“We need to have a unified voice going forward as we get through this perfect storm of drought, floods and Covid. We need relief for everyone to keep as many producers in business as possible. We should have a unified front that includes all producers,” said the IAC’s executive director, Kari Jo Lawrence.

Like Black farmers, Native American farmers have stories of blatant mistreatment in FSA offices. Lawrence recalls one: “One of the founders of the council was working with folks who went to the FSA office, and they sat down and were told they’d be helped, so they waited just for the FSA staff person to come back at the end of the day and say ‘We’re closed.’”

Both Black and Native American farmers have settled multimillion-dollar class action lawsuits against the USDA claiming they were denied farm loans due to discrimination. While the cases were triumphs in terms of the USDA admitting decades of bias, most plaintiffs did not receive outright payments, and far fewer received any debt relief.

A noticeable difference between the groups is that almost three times as many Native American farmers have outstanding FSA loans as Black farmers. More indigenous farmers continued to apply for them while many Black farmers have given up. “There are basically no other options. Private credit doesn’t want to serve Indian Country. Sometimes folks have to keep knocking on the door because that’s the only one that would ever be answered,” Duren said. 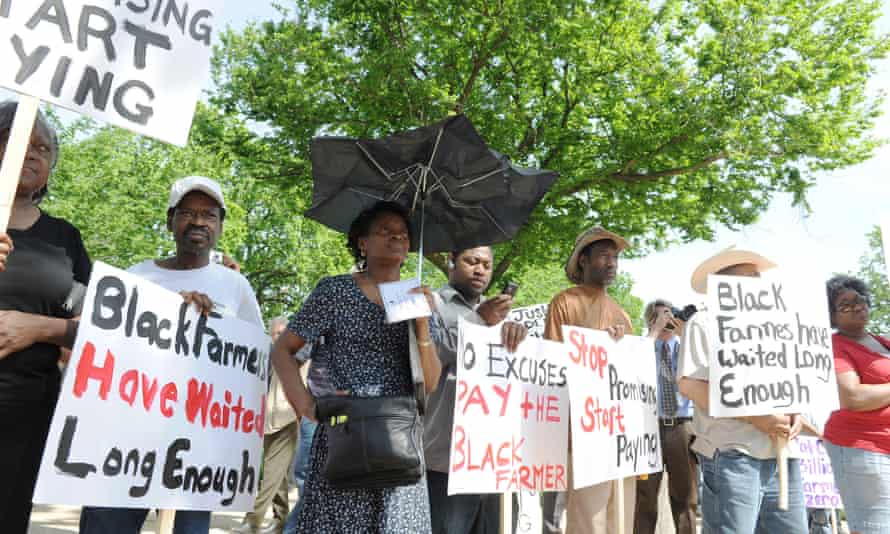 ‘I think we’ll get the debt relief around the same time we get the 40 acres and a mule,’ said Lloyd Wright, former director of civil rights at the USDA. Photograph: UPI/Alamy

“You can’t call this the big Black farmer bailout when almost none of them will get anything. Even if they were to do it, it’s not what it was sold to be. But we’re probably not even going to get it,” Wright said. “They could have done it within weeks. They were aware some angry people were trying to stop it. I think we’ll get the debt relief around the same time we get the 40 acres and a mule,” referring to the government’s broken promise to give Black citizens land to till and an animal to help plow it toward the end of the civil war. Black farmers were able to express the impact of the department’s longstanding racism to the House agriculture committee for the first time ever only five months ago.

“Many of us call [the USDA] the last plantation,” said Wright, who worked for the agency for 37 years. “Having worked there many years, that’s what it is. It doesn’t change much from one administration to another. So when you give them a job to carry out, and give us someone like Vilsack to implement it, it shouldn’t surprise people when it’s not happening.”

Wright grows soybeans on 100 acres in northern Virginia and is on the board of Socially Disadvantaged Farmers and Ranchers Policy Research Center at Alcorn State University, America’s oldest public historically black land-grant institution. His name comes up repeatedly among Black farming leaders as the person most in-the-know. Still, when asked if he’s in the loop about the program, he quickly answers “No.”

The silence around where debt relief stands is deafening for Black and Native American farmers who are counting on it.

Working with the office of tribal relations in the USDA has helped the IAC obtain some information. “Our producers ask have we heard any updates and we tell them anything we ever hear. There has not been a lot to tell them since the injunctions,” said Lawrence. “Everyone wants answers, including us. I hope it will happen. Our producers need some relief.”

Blanding said he and his staff at the Federation of Southern Cooperatives Land Assistance Fund are scraping by on what information they can get. The Federation was founded directly out of the civil rights movement in 1967 and is the only organization in the country formed and owned by Black farmers and landowners.

Updates on debt relief “are very general, stating that the department stands behind the act that Congress passed”, which Blanding said gives him and his membership some hope that the USDA is going to fight the lawsuits and continue with the original plan. But the timing is crucial.

“Many Black farmers will end up foreclosed on before this thing is resolved,” he said.“This not only will lead to more land loss in communities of color, especially Black communities, it also sets a precedent that all USDA programs designed to address equity and decades of systemic racism will now be subjected to this very same kind of lawsuit. That’s the precedent we hope not to set.”

‘Ghost games’ spotlight the psychological effect fans have on referees

What is the ‘ick’ and what can you do if you get it?