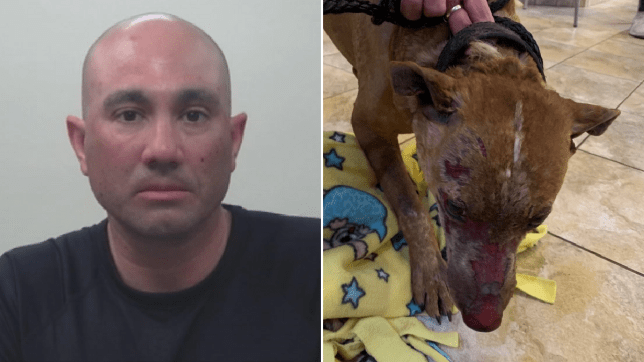 An alleged animal abuser came to visit his ex’s daughters dog and give the animal treats – then kidnapped the pet and fatally burned her, police say. Michael Busico, 40, is said to have snatched the red heeler, called Dixie, from Trista Heywood’s home in Toole, Utah, on March 1.

Busico, who has been arrested for animal abuse, then covered Dixiein fuel and set her alight by the side of the road, it is alleged.

Dixie suffered extensive second and third-degree burns to most of her body, and was left to suffer agonizing pain by the side of the road until she was spotted by a passer-by.

Sadly, Dixie was put to sleep on Monday after vets told Trista painful surgery would only extend her life by a few months, and leave the wounded animal in continued pain.

Writing on Facebook, Trista explained: ‘The hospital is basically keeping her alive her levels have gone down and those are improving but the surgery’s that she needs to her eyes, ears, and abdomen are going to be very hard on her and she may not make it out of them… 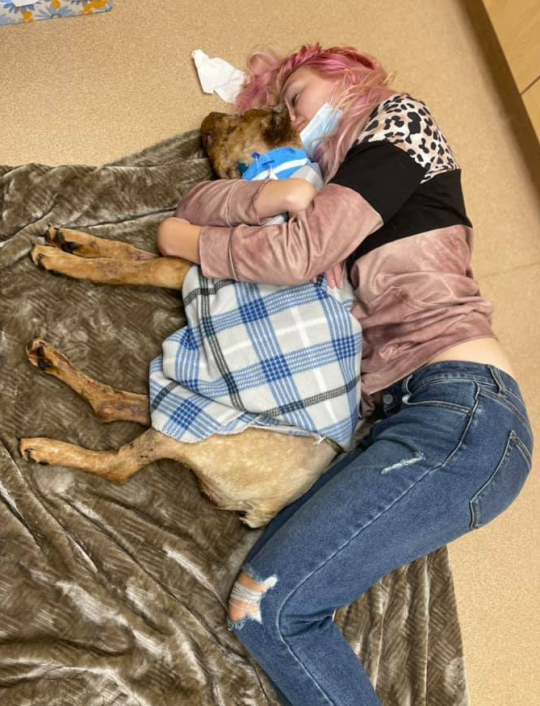 Dixie’s owner Trista Heywood shared photos of herself holding her pet after Dixie was put to sleep on Monday night (Picture: Facebook)

‘The tissue in her eyes are so badly burnt it is very damaged so she would be losing her eyesight completely and there is no healthy skin to be able to do a skin graft on her abdomen where she is very badly burnt.’

Busico is said to have shown up at Trista’s house and snatched Daisy while she was out to get back at Trista’s mother over their failed relationship, KUTV reported.

Trista came home to find her dog missing, and shared distressing updates after the mortally-wounded animal was taken in by a local animal shelter.

The stricken animal lover later shared photos and a tribute to Daisy after she was put to sleep, saying: ‘Tonight we had to say goodbye to our sweet Dixie girl. Dixie I am sorry this happened to you, I keep hoping to wake up and this will all just be dream but it’s not.

‘I still can’t wrap my head around it all and how someone could hurt you like this. You didn’t deserve this at all. You were so sweet, loyal, loving and caring. You are and always will be my best friend Dixie.’