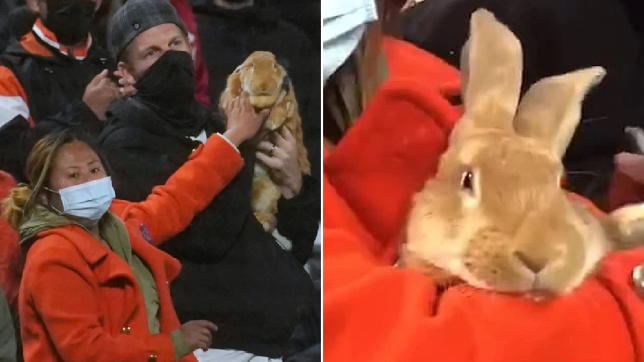 A woman’s bow-tie-wearing therapy rabbit became the star of the show when it was spotted in the stands at a baseball game.

Giant rabbit Alex stole the limelight from the players on the pitch, and stole the hearts of all the fans, when he attended Thursday night’s ball game between San Francisco Giants and Miami Marlins.

The golden-colored, four-month-old bunny is the first rabbit to attend the Giants’ Oracle Park home stadium in its 22-year history. He was in attendance, with snacks and all, alongside his owners Josh Row and Kei Kato, who has anxiety.

Alex is Kei’s adored therapy rabbit and helps her to manage her feeling when she’s struggling with her mental health. Little did Kei know that her beloved bunny would end up on the big screen and be cheered on by the crowd.

‘Tonight’s attendance, 4,580, not including the rabbit’, said official scorer David Feldman, to the joy of the fans at the game, reports KTLA.

Alex has been an important part of 32-year-old Kei’s life over the last year. She sadly lost her brewery restaurant called ‘K-OZ’ during the pandemic and now runs a small cafe in the US Immigration office. The bunny helps her deal with the anxiety and stress of no longer having the business she loved so much.

Kei said: ‘I lost it all because of Covid, so I’ve been really stressed a lot.

‘We support local, I was a local, He’s well trained, too.’

Giants CEO, Larry Baer, was thrilled to host Alex and his owners.

Over the last year Kei said Alex has attended a Nascar event and is even an ambassador for Lions Clubs International. Alex has also helped hand out 400 Easter eggs to children.