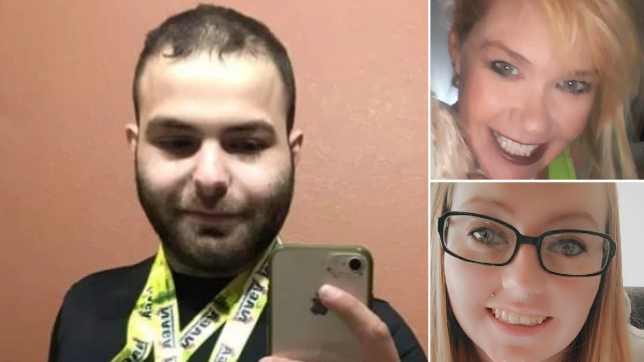 The grieving aunt of a woman shot dead in a supermarket massacre says she wants to ‘kill’ the gunman, and added: ‘May his rotten ass fry and burn in hell.’

Lori Olds made the emotional Facebook post after her niece Rikki Olds, 25, was confirmed to have been killed at the King Sooper supermarket in Boulder, Colorado, on Monday afternoon. Police say Ahmad Al Issa, 21, carried out the massacre, and have charged him with 10 counts of murder.

Olds wrote on Facebook: ‘Thank you everyone for all your prayers but the Lord got a beautiful young angel yesterday at the hands of a deranged monster…

‘We lost our beloved Rikki Olds to the monster who shot up the king soopers in Boulder CO yesterday may his rotten ass fry and burn in hell…if i don’t kill him first..we will be posting details about her arrangements in the upcoming days…’

A suspect, believed to be Al Issa, is pictured being led away from the King Sooper supermarket in the wake of Monday’s massacre

She had earlier made a desperate plea for prayers before receiving news of Rikki’s death. Olds said: ‘Please please please pray my niece Rikki is in that King Soopers right now Lord let her get out safely.’

It is unclear whether Rikki was shopping or working at the supermarket at the time of the massacre.

The shop had been giving out Covid vaccines to eligible people when Al Issa burst in and opened fire.

Al Issa was shot in the leg and arrested by police in the wake of the killings. He was taken to hospital for treatment, and is set to be booked into Boulder County Jail on Tuesday afternoon. 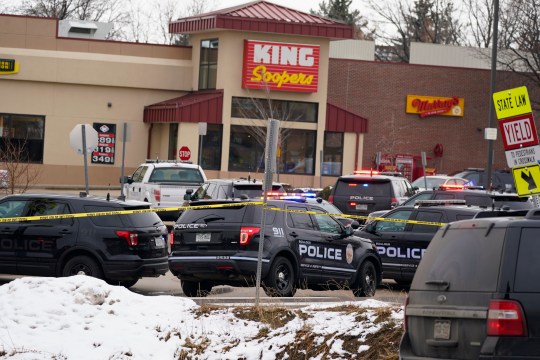 Dozens of police cars raced to the King Soopers supermarket in the wake of Monday’s shooting. The first officer who responded, Eric Talley, was among those killed

Boulder Police say it is too early to comment on a motive, and believe Al Issa acted alone. They said he lived in nearby Arvada, and had spent ‘most of his life’ in the US.

Al Issa’s brother Ali told The Daily Beast that his brother was ‘very antisocial’ and suffered regular paranoid episodes about people being out to get him.

Talley, an officer with Boulder Police Department, was the first cop on the scene. He was a married father of seven children.