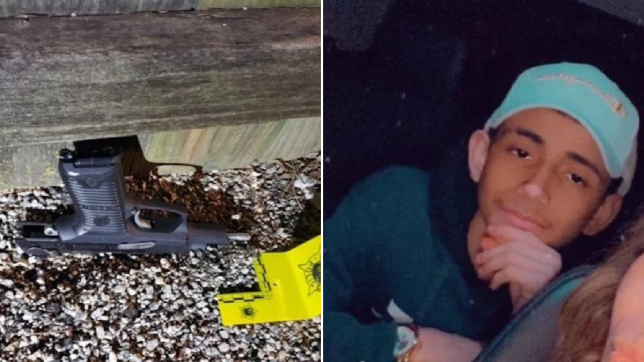 A 13-year-old boy has been identified as the person fatally shot by police in an ‘armed confrontation’ earlier this week. Adam Toledo suffered a gunshot wound to his chest and is the youngest person to be shot and killed by Chicago cops in years.

Police officers responded to a gunfire detection system alert for the Little Village neighborhood early Monday and ‘observed two subjects in a nearby alley,’ according to Chicago Police Department spokesman Tom Ahern.

‘One subject fled on foot which resulted in an armed confrontation,’ Ahern said, according to the Chicago Tribune.

Both subjects were male and one of them who was armed ‘fled from officers,’ according to a media notification from the department. Police ran after the fleeing subject and a ‘confrontation in an alley’ ensued, according to the notification.

An officer shot the armed male in the chest and a handgun was recovered and processed as evidence.

The other subject, identified as Ruben Roman Jr, 21, was arrested and charged with misdemeanour resisting or obstructing a peace officer, according to Chicago Police spokeswoman Kellie Bartoli.

Adam’s mother, Elizabeth Toledo, said she was not informed about what happened to her son in the hours following the shooting.

‘I’m trying to hang in there. It’s hard,” she told the newspaper on Thursday. ‘I have lots of questions.’

Elizabeth said she did not know her son was not home on Sunday night or Monday morning and that she later filed a missing person’s report that she believes led authorities to find her.

Adam was a seventh grader at Gary Elementary School and liked to ride his bike and listen to music, his mother said.

The officer who shot Adam has been placed on desk duty for at least 30 days. The police department’s Civilian Office of Police Accountability is investigating the shooting.