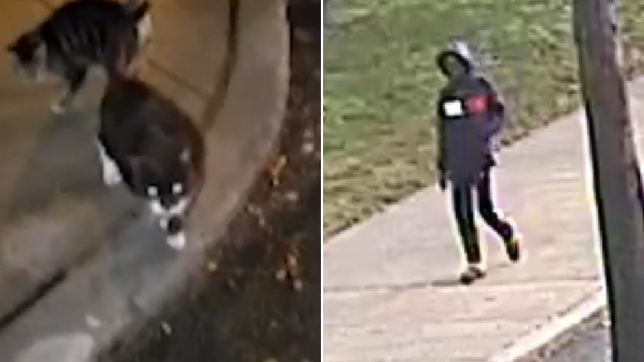 An animal abuser shook a frightened cat out of a tree where it was hiding so his pit bulls could maul the kitty to death. The cat killer – named as Fulton Gordon, 28 – was filmed knocking the cat, called Tuxedo, out of a tree in Brooklyn on January 13, then watching as his bloodthirsty dogs ripped Tuxedo apart.

Tuxedo had run to the tree for shelter after spotting the dogs – with Gordon then accused of knocking him out of it with a chair leg so his pit bulls could maul the helpless cat to death.

Latonya Sassee, who spent $600 a month caring for Tuxedo and the other ferals, told NBC New York: ‘(Tuxedo) got away and they put a chair there and a stick and they banged him down the tree. They made him come down the tree so their pit bull could maul him to death

Gordon was arrested by the New York Police Department on Monday, and faces a misdemeanor charge of animal torture. Tuxedo was a much-loved feral kitty, who was ‘mayor’ of a colony cared for by residents of the block where he lived.

He had a best friend and ‘girlfriend,’ locals say, and enjoyed hanging out with residents while they worked on their cars in the parking lot. News of Tuxedo’s death sparked global outrage, with tens of thousands of people signing a petition calling for his killer to face justice.

Sassee added: ‘When it first happened, I wanted to die, I couldn’t even get out of the bed for three days….

‘I have not been the same. This has crushed me, this has killed me. My spirit is gone.’

Speaking to the New York Post after Gordon was arrested, she added: ‘I’m so relieved, maybe my appetite will come back.

Gordon has yet to comment on the charges he faces, with the Post reporting that one of his relatives was stunned to her of the accusations made against him.

It is unclear whether police have found the dogs who killed Tuxedo.