American Airlines lost two cats belonging to a passenger on a flight from Los Angeles to New York. Ariel Dale, a singer and TikTok user, posted about the frightening ordeal in a three-part series on the social media platform.

Upon arriving at John F Kennedy International Airport, Dale realized her precious cats were missing after she initially dropped them off to the wrong location, The Independent reported.

Dale, who almost missed her flight to New York, was told to drop off her cats at the wrong location by an American Airlines worker.

‘I made it to my flight with like two minutes to spare,’ Dale said in the video posted on Monday.

‘No one can tell me where they are,’ the text in the clip reads. ‘This is actually my worst nightmare. They’ve already been in the kennel for over 14 hours (because) their flight was cancelled.’

Dale’s video, which shows her crying it, garnered sympathetic comments and has amassed more than three million views.

Eventually, Dale was reunited with her cats, according to one of the videos.

Dale said she received a message from American Airlines stating her original flight that her cats were supposed to be on was first delayed and then canceled. The airline had to rebook a flight. 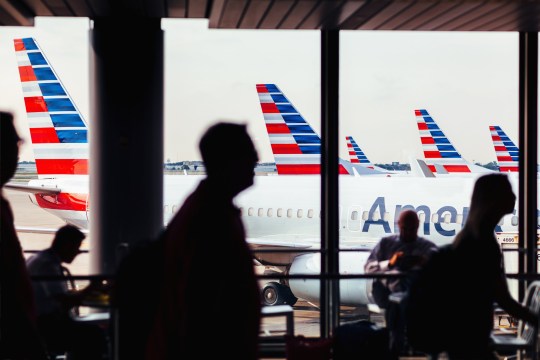 Ariel Dale said she received a message from American Airlines saying her original flight where her cats were supposed to be on was delayed and then canceled (Picture: Getty Images)

In the first video, Dale explained that her decision to have the cats accompany her was in their best interest, as they had developed anxiety around people.

The second video shows Dale carrying the cats and talking to a customer service agent who assured her the cats would be ‘well taken care of’.

It was at the baggage claim terminal that she realized her cats were missing and started to cry.

The final video shows the happy conclusion – she got her cats back.

The airline has yet to have offered her an apology.

‘While I understand mistakes happen, the bare minimum American could have done was apologize. I paid over $700 for the safe transportation of my cats and have not received an apology, explanation, or offer of compensation,’ Dale told The Daily Dot.

‘Thankfully my cats are home safe now but we are all traumatized from the experience. We are grateful for the love and support from people online.’

Can I go on holiday to France? Latest UK amber list rules and quarantine restrictions

Tristan Thompson Has ‘Love’ for Khloe Kardashian After Split